(UPDATED) Sequel set to air on NBC this fall will pick up where 'The Bible' left off "in the dark days after Jesus' betrayal and death."
Kate Shellnutt|March 6, 2013 12:44 PM 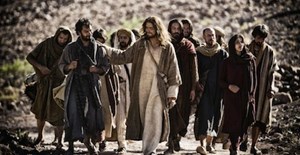 Update (July 1): NBC has announced that a new addition to its fall television lineup: a new series, tentatively titled "A.D.: Beyond the Bible," the sequel to this spring's popular miniseries "The Bible."

According to NBC, "Beyond the Bible" will pick up "in the dark days after Jesus' betrayal and death." It then will chronicle Jesus' disciples as they stand against authorities in the face of "terrible odds and brutal persecution."

Update (April 23):Entertainment Weekly reports that producer Mark Burnett has good news for anyone who was a fan of History Channel's miniseries The Bible: He has re-cut the series to create a movie version that will be released in the fall–and he's also working on a follow-up to the show.

Update (April 8): History Channel's miniseries The Bible ended just last weekend, but the show is already available on DVD—and sales are through the roof.

According to Broadway World, The Bible's home entertainment launch is the "biggest selling TV [show] on DVD in the last 5 years and the biggest miniseries of all time on Blu-ray, Digital HD and DVD in its first week of release … with 525,000 units sold."

"According to the Association for Christian Retail (CBA), The Bible is the fastest pre-selling faith based title in its 60-year history," Broadway World states. "The Bible also ranked #1 across digital stores including iTunes, Amazon, VUDU, Xbox, PlayStation, CinemaNow, and GooglePlay."

Update (Mar. 12): In its second week, zombies managed to beat the Bible for viewers. The Bible miniseries drew 10.8 million viewers Sunday night, versus 11.46 million for the Walking Dead. However, as Baptist Press reports, Burnett-Downey miniseries still placed second on cable for the night, and has garnered more than 50 million cumulative viewers (according to a press release).

The History Channel's latest hit drew crowds of biblical proportions, with 13.1 million viewers tuning in Sunday for the premiere of Mark Burnett and Roma Downey's miniseries on the Bible.

The two-hour episode, portraying Genesis and Exodus, was the most-watched and highest-rated show on TV that night and the most popular cable telecast of the year, beating out The Walking Dead on AMC, according to Nielsen.

Last year's premiere of Hatfields & McCoys on the History Channel scored an audience of 13.9 million, the network's most-watched program ever and the only one more popular than The Bible, Bloomberg News reported.

Maybe we shouldn't be surprised. The Gospel Coalition points out the Bible's been an entertainment hit for decades, with The Ten Commandments, Ben Hur, and The Passion of the Christ ranked among the top-grossing films of all time.

Still, Christians remain skeptical of cable TV's attempts to retell, debunk, and document the history of their faith. This time, plenty of believing Bible-readers tuned in to see if TV could finally get it right. #TheBible was trending on Twitter all weekend.

"Our greatest hope is that this series will affect a new generation of viewers and draw them back to the Bible," said Burnett, producer of hit shows such as Survivor,The Apprentice, and The Voice, in a recent interview with CT. Burnett and his wife Downey, who are Catholic, have also pushed for the Bible to be taught in public schools.

While their show's premiere drew curious Christians, they'll have to see if the viewership stays with them through the five-week-long series, which concludes Easter Sunday.