Trustees at Fuller Theological Seminary have sorted through 250 nominees and selected Mark Labberton as the school's next president.

Labberton, who currently serves as director of Fuller's Lloyd John Ogilvie Institute of Preaching, replaces longtime president Richard Mouw, who retires in June after leading the seminary for the past two decades. (Complete press release below.)

Fuller has had only two presidents over the past 50 years: Mouw and his predecessor, David Hubbard. Labberton will be the seminary's fifth president.

CT has an exclusive interview with Labberton here.

Labberton's priorities will be "to strengthen Fuller's commitments to the church, to deepen the ways Fuller addresses some of the key concerns and needs of the world, and to nurture a spiritually supportive community that includes all of Fuller's regional campuses and the rich ethnic, language, and denominational diversity of the seminary," according to Fuller's press release. "I hope to continue the kind of generous, gracious, ...

Subscribe to CT and get one year free
Tags:
None
Posted by:
Melissa Steffan 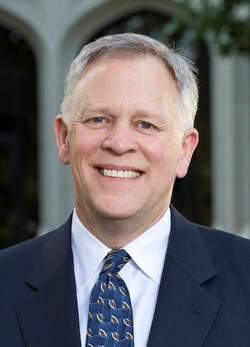