Update: Following the trustees' meeting, CT spoke with Moore about his new role.

Trustees for the Southern Baptist Convention's Ethics and Religious Liberty Commission (ERLC) have elected Russell Moore as its next president.

Moore, a well-known Southern Baptist leader who currently serves as dean of the School of Theology at Southern Baptist Theological Seminary (SBTS) in Kentucky, will succeed Richard Land when he retires. (Complete press release at bottom.)

Just talked to @drmoore to congratulate him on his election as President of the Ethics and Religious Liberty Commission of the SBC.– albertmohler (@albertmohler) March 26, 2013

The election of Russell Moore as ERLC president is a great day for all Southern Baptists. He will make us all proud. @drmoore– albertmohler (@albertmohler) March 26, 2013

Moore says he hopes to speak with "convictional kindess" throughout his presidency. 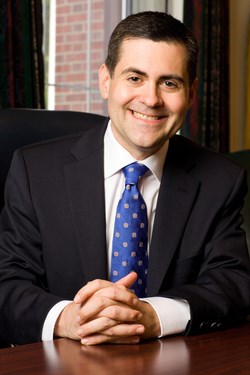