The deadly tornado that struck Moore, Oklahoma, last week likely changed how many Americans feel about God and generosity, according to a survey of more than 1,000 adults conducted by LifeWay Research just days after the disaster.

"Nearly six in 10 Americans (57 percent) agree with the statement, 'When a natural disaster occurs, my interest in God increases,'" according to LifeWay. "Thirty-one percent disagree and 12 percent don't know."

The full report suggests that 1 in 3 people say they "trust God more" in the midst of suffering caused by natural disasters. Another 1 in 4 people report being "confused by God," but only 1 in 10 wonders "if God cares." (See full infographic below.)

Among those most likely to doubt God's existence in the way of disaster? Younger Americans, LifeWay says. Meanwhile, "Southerners, frequent church attendees, and those without a college degree are likely to trust God more during disasters."

CT previously reported on the efforts of the 'faith-based FEMA' in Moore. 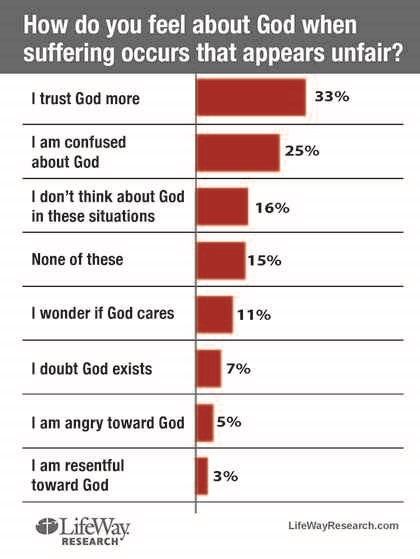