Countries That Are Bad for Christians Are Good for Distributing Bibles 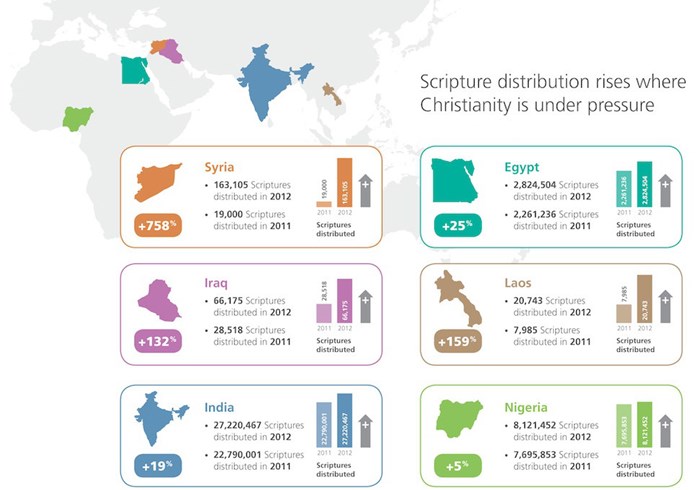 Demand for Bibles and other forms of Scripture has surged in areas of the world where Christians most frequently face religious freedom violations.

The United Bible Societies (UBS), which represents 146 Bible societies in more than 200 countries and territories, reports:

For example, the country with the highest increase of Bible distribution from 2011 to 2012 is Syria, which recently leapt from No. 36 to No. 11 on the WWL. While the nation's Bible society distributed 19,000 Scriptures in 2011, it distributed 163,105 in 2012—a 758 percent increase. (Many of those products were Scripture calendars and books for Christmas and Easter.)

"Christians in Syria are under enormous pressure and are in great need of encouragement," said Mike Bassous, general secretary of the Lebanon Bible Society (which oversees Syria) in a UBS press release. "Staff in Syria are working hard to produce enough Scriptures to meet these needs. They have focused on producing smaller items of Scripture, like calendars and Scripture booklets, because they can do this quickly and also because they are easier to transport than full Bibles."

Egypt rose by 25 percent in Scripture distribution, while India had a 19 percent increase. The countries ranked No. 9 and No. 10 for places with the largest Christian minorities respectively. Egypt ranks No. 25 on the WWL, while India is No. 31.

In No. 15-ranked Nigeria, where Christians make up the world's largest Christian minority, UBS delivered 8.1 million Scriptures, a 5 percent increase since 2011.

Distribution for digital-format Bibles, including YouVersion, are up as well, says UBS.

CT has previously reported on UBS members, including how the world's newest Bible society was already out of Bibles and how a translation by the Norwegian Bible Society unexpectedly outsold 50 Shades of Grey. CT noted how Egypt's Bible society reacted to the military's killing of approximately 1,000 protesters, and how the Central African Bible Society was ransacked as it prepared to dedicate a new Bible translation.

Countries That Are Bad for Christians Are Good for Distributing Bibles

Countries That Are Bad for Christians Are Good for ...