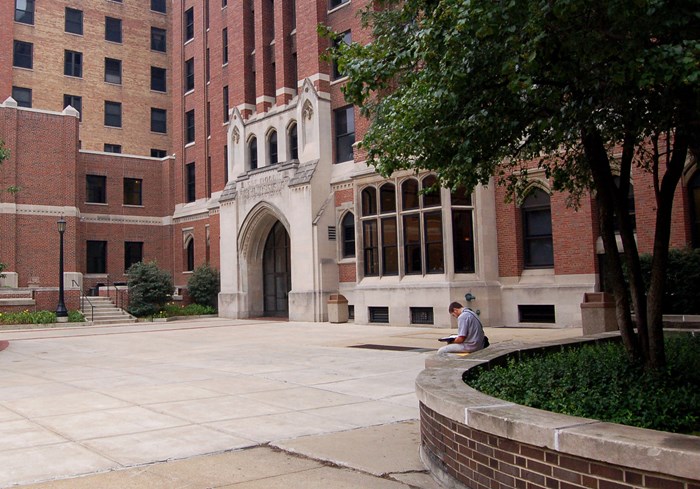 (RNS) The Chicago-based evangelical Moody Bible Institute has dropped its ban on alcohol and tobacco consumption by its 600-some faculty and staff, including for those who work in its radio and publishing arms.

The change in August reflected a desire to create a "high trust environment that emphasizes values, not rules," said spokeswoman Christine Gorz. Employees must adhere to all "biblical absolutes," Gorz said, but on issues where the Bible is not clear, Moody leaves it to employees' conscience.

Employees may not drink on the job or with Moody students, who are not allowed to drink while in school.

Founded in 1886 by evangelist D.L. Moody, the Moody Bible Institute pays the cost of tuition (about $6,000 per semester before federal aid) for its 1,600 undergraduates who attend the main campus in downtown Chicago, many of whom go into ministry after graduation.

Students must abstain from tobacco, alcohol, illegal drugs and "sexual promiscuity" for at least one year before they enroll and during their time at Moody.

"In addition, students are to refrain from gambling, viewing obscene or pornographic literature, and patronizing pubs, bars, nightclubs, comedy clubs, and similar establishments," the catalog says. "There will be no on- or off-campus dances sponsored or organized by Moody Bible Institute students or personnel."

Last year, the school lifted a ban on long hair for men and nose stud earrings for women. "Hair is to be well-groomed and should avoid extremes," the guidelines say, and hair should be of natural color.

The change at Moody represents the latest shift in attitudes at different Christian institutions in recent years.

Ten years ago in suburban Chicago, Wheaton College lifted the ban on student dancing and now allows faculty, staff and graduate students to drink, though not on campus. Other schools, including Huntington University and Asbury Seminary, have changed their stances on employees and drinking in the last five years, said Jennifer Woodruff Tait, managing editor of Christian History Magazine.

"It's part of a larger trend of wanting cultural acceptance," said Tait, who noted that professors would go to academic conferences and be embarrassed when they couldn't drink with friends. "A lot of people saw attitudes to alcohol as a witness. Many people are saying there are other ways to witness and this is a way to fit in."

Colleges and seminaries are one barometer to gauge current evangelical thinking on social issues, said Larry Eskridge, associate director of the Institute for the Study of American Evangelicals.

"Generally, permissive attitudes about alcohol within an evangelical denomination or school are looked upon by many conservative evangelicals as a hallmark of decline, perhaps even of apostasy," he said.

"By contrast, more 'progressive' elements within the evangelical community these days are likely to look upon those institutions with strictures against alcohol use as legalistic and accuse them of 'majoring on the minor.'"

Many, if not most, Christian colleges do not allow undergraduates to drink, but the policy for faculty and staff varies. The umbrella organization Council for Christian Colleges & Universities does not keep statistics on where its member institutions stand. CCCU spokeswoman Pamela Jones says she knows of no CCCU-affiliated school that allows alcohol on campus.

Many late 19th-century evangelicals and fundamentalists were leaders of the temperance movement against alcohol. The evangelist Moody was among those who argued for voluntary abstinence rather than the prohibition enforced by law, according to the encyclopedia "Alcohol and Temperance in Modern History."

Moody was particularly interested in reaching drunkards, according to the book "Moody's Talks on Temperance, with Anecdotes and Incidents." He stressed "the power of God's grace to take away the appetite for liquor," wrote the Rev. James B. Dunn.

"I think for us, this is really about what Scripture says," Gorz said. "I don't know if what D.L. Moody's opinion might have been was really taken into consideration."

Policies on Christian college campuses can be trickier than other religious institutions like denominations, as some students are under the 21-year-old drinking age limit.

Affirming a long-standing stance, the Southern Baptist Convention adopted a resolution in 2006 of "total opposition" to alcoholic beverages, urging that no one who drinks be elected to leadership in the denomination. Individual SBC churches determine their own position.

Like sex, alcohol has been a sensitive issue for younger evangelicals as many were told to abstain from both.

"You have a generation that's eager to dive into the gray areas. Sex and alcohol aren't on the same page, but we were told to not do both," said Tyler Huckabee, a 2007 Moody graduate who's now the managing editor of Relevant, a magazine for young evangelicals. "It backfired as some started doing (one or both)."

Young evangelicals still fall on different sides of the aisle, he said.

"It's something that we need a developed philosophy and theology on," Huckabee said. "It's like, instead of just being told to abstain from sex, we need to develop something on what a healthy sense of sexuality is."