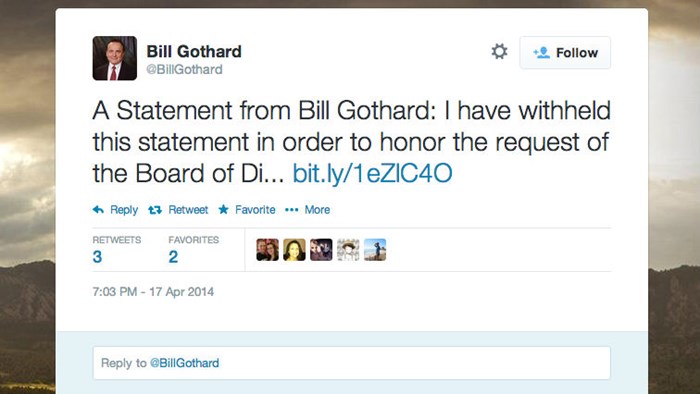 Update (Apr. 22): Recovering Grace has responded to Gothard's open letter, noting "several positive aspects" but overall explaining why it "leaves us troubled" because it remains "incomplete." Meanwhile, a group of academics and ministry leaders (lead cosigner: Norman Geisler of Veritas Evangelical Seminary) is publicly asking IBLP leaders to partner with a seminary to "biblically evaluate" Gothard's past teachings.

As many Christians washed each other's feet during Maundy Thursday services, Bill Gothard broke his silence on allegations that the popular seminar speaker regularly touched young girls' feet amid other forms of harassment.

CT reported in March how Gothard resigned as president of his Institute in Basic Life Principles (IBLP) after his board began investigating sexual harassment accusations from more than 30 women. IBLP said the 79-year-old, who drew 2.5 million people to his family-focused Basic Seminars but never married, explained that he "wanted to follow Matthew 5:23–24 and listen to those who have 'ought against' him."

According to Recovering Grace (RG)—the website that published the women's stories—Gothard later held a 90-minute conversation with RG leaders to understand the pain his behavior had caused. "We are hopeful that Mr. Gothard will choose the long and difficult path of repentance," RG stated.

Meanwhile, IBLP said it is "startled and concerned" by the allegations and will respond "in due time" after completing a "Christ-honoring review process."

In his Thursday statement, announced via Twitter, Gothard responded publicly to the allegations for the first time.

"My actions of holding of hands, hugs, and touching of feet or hair with young ladies crossed the boundaries of discretion and were wrong," writes Gothard. "They demonstrated a double-standard and violated a trust. Because of the claims about me I do want to state that I have never kissed a girl nor have I touched a girl immorally or with sexual intent."

However, most of Gothard's statement focuses not the harassment claims, but on having put his ministry above the needs of the people who served it. Gothard expresses repentance and his desire for reconciliation.

"I put the Institute and its goals ahead of people and their needs," admits Gothard, later writing, "More than anything I want to make right what I have done wrong and deepen my relationship with the Lord. I trust in God's undeserved mercy and pray that those whom I have offended would find grace to forgive me."

Here is the statement in full:

I have withheld this statement in order to honor the request of the Board of Directors to wait until an initial review has taken place. As the review continues, I now want to make this statement.

God has brought me to a place of greater brokenness than at any other time in my life. It is a grief to realize how my pride and insensitivity have affected so many people. I have asked the Lord to reveal the underlying causes and He is doing this.

For many years I have been building the Institute but losing my first love for the Lord. God warns "I know thy works, and thy labour . . . Nevertheless I have somewhat against thee, because thou hast left thy first love. Remember therefore from whence thou art fallen, and repent. . . " (Revelation 2:2, 4, 5). I was finding value and affirmation from the accomplishments of the ministry and those involved in it instead of filling this void in my life with God and His love. I have repented in deep sorrow. However, over the years many people have been offended in different ways because of my lack of genuine love.

I put the Institute and its goals ahead of people and their needs. Standards became more important than relationships. People who didn't "measure up" were cut off and those who were not seen as adding value to the ministry were treated as though they were expendable. The more I have listened to people describe their experiences the more grieved and sorrowful I have become.

My wrong focus produced a further consequence. Families were made to feel that they must "measure up." This resulted in some parents putting undue pressure on their sons and daughters in order for the family to be accepted. When there was a lack of love or consistency, sons and daughters saw this as hypocrisy and rejected it. Also, many felt that the expectations where so high that they could never measure up to them. This resulted in a feeling of deep defeat.

This emphasis on outward appearance was also manifested by bringing selected young people to serve at the Headquarters and causing others to feel rejected and offended by my favoritism. My actions of holding of hands, hugs, and touching of feet or hair with young ladies crossed the boundaries of discretion and were wrong. They demonstrated a double-standard and violated a trust. Because of the claims about me I do want to state that I have never kissed a girl nor have I touched a girl immorally or with sexual intent.

I have failed to live out some of the very things that I have taught. I am committed to learning from my failures by God's grace and mercy, and do what I can to help bring about Biblical reconciliation as Jesus commands: "Therefore if thou bring thy gift to the altar, and there rememberest that thy brother hath ought against thee; Leave there thy gift before the altar, and go thy way; first be reconciled to thy brother, and then come and offer thy gift" (Matthew 5:23-24).

More than anything I want to make right what I have done wrong and deepen my relationship with the Lord. I trust in God's undeserved mercy and pray that those whom I have offended would find grace to forgive me. I know that I do not deserve this. I would certainly appreciate your prayers during this time that God would bring healing to those who have been so deeply affected by my actions. I am grateful for the opportunities I have had thus far to be reconciled with individuals and it is my goal to contact as many others as I can, fully hear them, and do whatever I can to bring about Biblical reconciliation.

My greatest offense has been against God. I have earnestly sought His mercy and forgiveness and have asked Him to allow me to experience more of Him and the power of His resurrection.