(UPDATED) No more 'Bible antagonists,' among many findings in this year's ABS/Barna 'State of the Bible' report.
Sarah Eekhoff Zylstra|April 8, 2014 05:26 PM 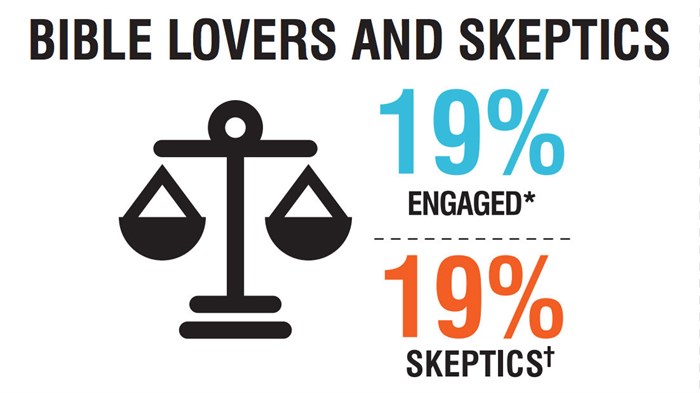 Update (Apr. 10): After releasing their 2014 report, ABS and Barna decided to soften the language used to describe Americans who are least engaged with the Bible.

The groups have "renamed the category formerly known as 'Bible Antagonists' as 'Bible Skeptics,' and now define the category as people who "selected the most negative or non-sacred view of the Bible from five options, saying they believe the Bible is just another book of teachings written by men, containing stories and advice."

"The change reflects a recognition that 'antagonistic' may too strongly pigeon-hole those who have not yet embraced the Bible," Geoffrey Morin, chief communications officer, told CT. "The new categorization, 'Bible Skeptics,' is both more accurate and more hopeful."

The new infographic below reflects the change.

The number of Americans who read Scripture at least four times a week and believe that it is the inspired word of God has fallen to just under 1 in 5, according to new research from the American Bible Society (ABS).

The same percentage of Americans (19 percent) are now "antagonistic" toward the Bible, reading it less than once per month and believing it is a book of teachings written by men that contain stories and advice.

ABS previously proclaimed in 2013 that the Bible had gained 6 million new antagonists. This year, it writes:

That leaves 18 percent "express strong skepticism," believing that the stories and advice were written solely by men.

While the percentage of adults who read the Bible hasn't changed statistically over the past three years, Barna did ask those who increased or decreased their reading about their motivation.

Adults who increased their Bible reading did so as part of their faith journey (53 percent) or because something difficult in their life caused them to search in the Bible for answers (41 percent). Being able to download the Good Book onto a tablet or smartphone prompted 26 percent of those who increased their Bible reading, while a significant life change influenced others (17 percent).

Being too busy was the number one reason Bible readers decreased their reading time in the past year (40 percent), while 17 percent pointed to a significant life change, 15 percent became atheist or agnostic, and 10 percent went through a difficulty that caused them to doubt their faith (13 percent).

The 2014 report also adds to the evidence that the most popular and fastest growing Bible translation is not the bestselling New International Version. Slightly more than 1 in 3 Bible readers told Barna they prefer to read the King James Version.

Barna defines the attitudes of Americans toward the Bible as follows:

CT's coverage of previous reports includes the Bible's influence on presidential elections in 2012, as well as the 6 million new antagonists noted in 2013.

Previous stories on ABS include how the organization recently hired a veteran Bible translator, Roy Peterson, as its president, after it fired Lausanne's Doug Birdsall. ABS's effort to create a .bible domain for websites was one of Gleanings most-read posts of 2013.

Here is the ABS/Barna revised infographic: