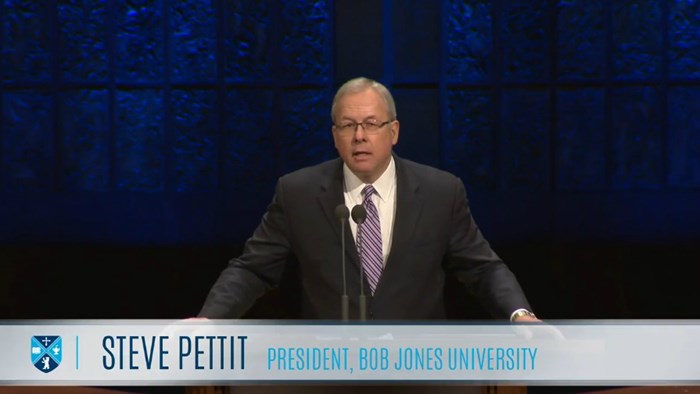 A two-year investigation into how Bob Jones University (BJU) responded to dozens of victims of sexual abuse over four decades recommends that the Christian school "impose personnel action"—ranging from termination to remedial education or other "corrective action"—upon its current chancellor, curb the counseling activities of a former dean, and disassociate from three Christian teachers.

Preempting today's release of the lengthy report, which also offers moderate praise for the school's recent policy changes on abuse disclosures, BJU's new president pledged yesterday to learn from victims who found the school's counseling to be “inadequate, insensitive and counter-productive.”

“On behalf of Bob Jones University, I would like to sincerely and humbly apologize to those who felt they did not receive from us genuine love, compassion, understanding, and support after suffering sexual abuse or assault,” said president Steve Pettit, addressing students and faculty in chapel Wednesday. “We did not live up to their expectations. We failed to uphold and honor our own core values. We are deeply saddened to hear that we added to their pain and suffering.”

The group hired, fired, and rehired by BJU to do the self-imposed investigation, GRACE (Godly Response to Abuse in the Christian Environment), made its final report public today. [A detailed response webpage and initial report overview from BJU accompanies the GRACE release.]

“Though much in this report will understandably cause readers to grieve, GRACE is encouraged by the willingness of Bob Jones University to take the unprecedented step to voluntarily request this independent investigation and to make these difficult findings public," stated GRACE executive director Boz Tchividjian. "Such institutional transparency is too rare and will hopefully set a positive precedent for Christendom and the watching world."

Tchividjian summarized the 300-page report's findings, based on interviews with 50 self-identified victims of sexual abuse and more than 60 other individuals:

The investigation findings demonstrate that Bob Jones University responded poorly to many students who disclosed being sexually victimized. As a result of the school’s flawed responses, many of these students were deeply hurt and experienced further trauma. The report outlines these painful experiences, as well as identifies and analyzes certain systemic institutional behaviors that contributed to the pain suffered by abused victims. The report concludes with 26 recommendations that “will assist BJU in continuing the journey of repentance that demonstrates Godward sorrow, invites God to transform the institution, and brings healing to the hurting.”

Pettit announced he has appointed a committee to “thoroughly review every aspect and concern outlined in the investigation and respond appropriately.” His areas of concern:

The report stated that BJU officials were not adequately prepared or trained to counsel victims appropriately.

University staff members were perceived by some to be insensitive to their suffering and sometimes rushed to resolve their negative feelings without adequate concern for their pain.

Some victims reported that the counseling offered by the University was inadequate, insensitive and counter-productive.

Some felt a number of staff members at the University tended to blame victims for the abuse or sexual assault they experienced and that this implied blame left them feeling more traumatized.

The report found that counseling sometimes overlapped with disciplinary actions. Victims felt counseling should be separated from BJU’s discipline process and a clear procedure of confidentiality should be established.

The report was originally due in March, but was delayed when BJU fired GRACE in January, then re-hired them in February to finish the work. CT noted BJU's termination of the contract, which “took GRACE by complete surprise,” as well as its reinstatement after “GRACE satisfactorily addressed the University's concerns” and BJU was confident the review could be “completed in a timely and professional manner.”

GRACE initiated the investigation with an online survey, accessed by 924 people. Of this group, 601 “identified themselves as a survivor of a child and/or adult sexual abuse, a person who knows a sexual abuse survivor affiliated with BJU, and/or someone who has first-hand knowledge of BJU’s teaching and practices about sexual abuse.”

Regarding past president Robert Jones III, who left the presidency in 2005 and currently serves as chancellor, the GRACE report states, “As president of BJU during much of the time that was the subject of this investigation, Dr. Jones, III is ultimately responsible for many of the difficult findings of this investigation. [He] has also repeatedly demonstrated a significant lack of understanding regarding the many painful dynamics associated with sex abuse.”

Regarding the recommended "personnel action," the report explains this "includes, but is not limited to, termination, suspension, probation, transfer, remedial education and training, or any other form of corrective action consistent with transforming the employee's teaching, conduct, or overall disposition regarding sexual abuse matters."

GRACE also criticizes BJU’s previous administration for its failure to legally report a “number of cases prior to 2010.”

“Regardless of intent, the university caused students and children to be more vulnerable to dangerous perpetrators by failing to report or even encourage the reporting of sexual crimes,” the report states, placing the majority of blame on James Berg, a former dean of students who currently teaches graduate courses in crisis counseling and Christian discipleship.

"As the most influential member of the BJU community regarding the many issues related to the counseling and discipline of sexual abuse victims, Dr. Berg bears much responsibility for much of the pain caused by BJU's failure to understand and respond adequately to matters related to sexual abuse," the report states. "It is recommend that as long as Dr. Berg is employed by BJU, he no longer be authorized to teach on any issue related to sexual abuse or victimization. It is recommended that Dr. Berg also no longer be allowed to provide any counseling and/or discipleship on or off campus. It is also recommended that Dr. Berg not be allowed to speak or consult any issue related to counseling on or off campus."

On its response webpage, BJU responds that the "personnel recommendations, along with the other recommendations, will be reviewed over the next 90 days by a committee appointed by the president of the University."

GRACE framed its 26 recommendations to BJU as “continuing the journey of repentance that demonstrates Godward sorrow, invites God to transform the institution and brings healing to the hurting.” The recommendations include:

GRACE's report also identifies a conflict of interest in BJU's counseling department, where counselors were supervised by the dean of students and obligated to report disciplinary offenses. “This duality that combines discipline and counseling under the Student Life structure creates an ethical conflict because of the potential for adverse disciplinary consequences for the counselee,” the report states. It also notes the arrangement risks "breaches in confidentiality."

The report notes the disagreement of Jones III, who defended the arrangement and comparing the dean's role to parenting. But Berg confirmed to GRACE “that the university’s internal communications about confidential disclosures of abuse had been ‘sloppy’ due to the university’s ‘family’ structure,” and acknowledged the need for improvement, according to the report.

On its response webpage, BJU states it has "physically separated counseling services from the discipline process. This was done because the proximity of counseling and discipline may have contributed to an atmosphere of fear for abuse/assault victims and other students who were struggling with other issues."

GRACE acknowledged that BJU's response to sexual abuse had improved since 2010. The report states the 2014-2015 version of the school's sexual abuse disclosure policy “the most improved abuse and neglect policy that BJU has published,” and stating that its “improvements are highly commendable and signal an increased awareness of mandatory reporting laws.”

“BJU’S recognition of desire for continued training are positive indicators of growth in properly handling reports of abuse. Continued training and development are critical pieces of BJU’s future and must remain a priority for university leaders as it moves forward,” the report states. It notes:

At this moment in history, Bob Jones University has been given an exceptional opportunity to be a voice of hope, compassion, and love that many victims of sexual abuse so desperately need(ed) and desire(d) during their time on campus. If Bob Jones University responds to these expressions of pain and loss with repentance and genuine commitment for substantive change, it will begin to comfort the afflicted while reflecting a love for the One who is able to heal and transform individuals and institutions.

Apart from the GRACE report and any future changes made in light of it, Pettit yesterday listed other steps taken by BJU over the past three years:

To make every member of the faculty and staff a mandatory reporter which requires each to promptly notify law enforcement officials of child sexual abuse.

To encourage adult victims of sexual assault to report their experience to the appropriate law enforcement officials.

To make clear that the biblical lesson of forgiveness does not imply that the victim is in any way responsible for the sexual assault or abuse they experienced.

To provide more extensive training and access to professional counselors with expertise in sexual abuse for University personnel who interact with victims coming to them for care and compassion.

“We do not take the concerns of the victims who believe we failed them lightly,” said Pettit. “We know we must work to regain their trust through actions, not words, and for those actions to be truly meaningful, we must make a long-term commitment that creates genuine, sustainable change…. This is our solemn pledge.”

Pettit's videotaped statement can be watched here. BJU offers a webpage that answers questions and its initial overview to the GRACE report.

Past media reports have noted the GRACE investigation was initiated in 2012 after BJU reported nine campus sexual offenses in its 2011 Clery report. On its response webpage, BJU acknowledges the investigation was prompted by "a number of high profile national news reports regarding child sexual abuse, especially on college campuses," in the fall of 2011, but notes "the agreement with GRACE was not prompted by any specific event, nor was there any evidence of a systemic problem of sexual abuse on or off campus involving BJU students or employees." On the 2011 Clergy data, the school offers the following details:

Nine students reported being touched by a single perpetrator in the campus library during regular library hours. The nine students reported the incidents to campus authorities the same day. BJU has a no tolerance policy and immediately facilitated the reporting of the incidents to the Greenville Police Department and offered counseling to the students. The student was dismissed. Representatives of the solicitor’s office interviewed the nine students and over the next months resolved the matter through the legal system.

The category under which BJU reported the offenses—forcible sexual offense—includes a wide range of offenses. This does not diminish the gravity of the situation as we are grieved over any kind of sexual misconduct.

GRACE was previously retained to complete an investigation of 1980s sex abuse charges against New Tribes Missions. The Association of Baptists for World Mission (ABWE), which faced similar allegations, hired GRACE but fired them weeks before the two-year investigation was complete.

CT's reporting on abuse includes a cover story on Compassion International president Wes Stafford's experience of abuse as a missionary child, as well as how abused MKs are joining together to shed light on past abuse and to prevent future abuse.