(UPDATED) Groups now hope to complete project together. Firing 'took GRACE by complete surprise,' while BJU was 'disappointed a resolution could not be reached before our differences were made public.'
Kate Tracy|February 7, 2014 10:25 AM 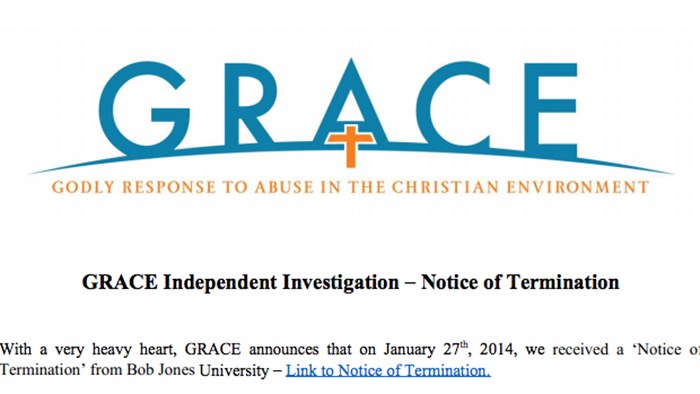 Update (Feb. 25): BJU will allow GRACE to complete the investigation after all.

Update (Feb. 13): BJU and GRACE have agreed to meet next week "to discuss the concerns of both parties and determine a plan for moving forward." BJU states:

Bob Jones University and GRACE remain hopeful this project can be completed with GRACE and in so doing raise sexual abuse awareness and minister to victims whose lives have been ravaged by abuse.

The purpose of this meeting is for the parties to articulate expressed concerns, as well as to dialogue about the possibility of GRACE completing the independent investigation process started last year.... We ask for prayers for everyone involved in this upcoming meeting. We also ask that we continue to pray for God to work mightily on the behalf of all the amazing individuals who have been impacted by this most recent development.

Update (Feb. 12): The New York Times offers a lengthy look at BJU's decision to fire GRACE, while an updated statement from BJU notes the school "is committed to moving forward – either with GRACE or another third party – to finish the project and publish a public report."

Bob Jones University drew praise in 2012 for proactively investigating allegations of sex abuse and whether the school responded adequately. But approximately one month before the results of the 13-month investigation were due to be published, it has fired the private firm it hired, GRACE (Godly Response to Abuse in the Christian Environment), and requested that the investigation halt and remain confidential.

GRACE, which was similarly fired last February shortly before it could conclude another abuse investigation, revealed the news yesterday on its Facebook page.

"This 'Notice' took GRACE by complete surprise as there had been no prior indications from BJU that termination was even being considered," stated GRACE in a press release. "Furthermore, this termination occurred days before GRACE was to conduct the last interviews of this 13-month investigation and begin drafting the final report scheduled for publication in March."

BJU promptly responded. "Over the last several months, we grew concerned about how GRACE was pursuing our objectives, and on Jan. 27, 2014, BJU terminated its contract with GRACE," the university stated in a press release. "It is BJU's intention to resolve its differences with GRACE, and we are disappointed a resolution could not be reached before our differences were made public."

GRACE is led by Boz Tchividjian, a Liberty University law professor and grandson of Billy Graham. Tchividjian, who blogs on abuse within faith communities for Religion News Service, recently did a three-part interview with Ed Stetzer on how evangelicals handle child abuse and how hierarchical and non-hierarchical denominations can prevent abuse in their churches.

In a January 24 termination letter made public by GRACE, BJU president Stephen Jones and chairman Larry Jackson thank GRACE for "helping us achieve our objectives of appropriately responding to reports of sexual abuse and identifying opportunities to ask forgiveness of individuals we may have underserved when they reported to us they had been abused at some point in their life." They then ask GRACE to halt the current investigation, keep its findings confidential, and come to a "new agreement," stating:

While undertaking these efforts, there has been a great deal of change here at the University. As you know, I recently announced my resignation as president of the University effective in early May. As you can imagine, this has redirected a significant amount of our focus and energy.

While remaining resolute in our desire to achieve our stated objectives, in view of the ongoing challenges in leadership change, pursuant to Section VIII, Bob Jones University hereby notifies GRACE that we are terminating the Nov. 16, 2012, Engagement Agreement for Independent Investigation. This termination is effective immediately.

In December, Jones announced his resignation as president of the university because of ongoing health issues, according to a press release. The BJU board is currently searching for a new president, but according to university by-laws, the board has to close the school if it cannot find a suitable leader.

In addition to hiring GRACE, the school says it also independently initiated awareness for sexual abuse, as well as providing live Sexual Abuse Awareness Training to its 3,000-plus students and 1,000-plus faculty and staff members.

This isn't the first time GRACE has been fired before completing an extensive sex abuse investigation. Last February, the Association of Baptists for World Evangelism (ABWE) terminated its work with GRACE and hired another investigator, claiming the GRACE inquiry was "fatally flawed." GRACE defended its investigation, claiming ABWE was "unwilling to have itself investigated" without control.

CT reported when BJU first hired GRACE, as well as how GRACE was retained to complete an investigation of 1980s sex abuse charges against New Tribes Missions.

The full press releases from both GRACE and BJU are below:

This 'Notice' took GRACE by complete surprise as there had been no prior indications from BJU that termination was even being considered. Furthermore, this termination occurred days before GRACE was to conduct the last interviews of this 13-month investigation and begin drafting the final report scheduled for publication in March.

Despite repeated requests, GRACE has not been informed of why the agreement was terminated. However, due to the fact that GRACE certainly wishes to keep all options on the table in order to complete what has been started, we have spent the last week in communication with BJU and we remain open to continued dialogue.

At this point, we are most concerned about the potential impact of this termination on those who participated in the investigation and are waiting for the final report. We grieve with those whose hopes will be crushed should this independent process remain incomplete. Please know that we heard your voice and it was not spoken in vain. GRACE offers its assurance that we will do our utmost to protect your confidences in the interviews and surveys from unauthorized use or disclosure. You have honored us with your courage and trust. We are privileged to have sat with each of you.

GRACE will post updates should the current situation change. Above all, we continue to have hope in the One who makes all things new and never lets us go.

Greenville, S.C. (February 6, 2014) – In the fall of 2011, the national news was filled with a steady stream of heart-breaking revelations of sexual abuse on college campuses. These events prompted Bob Jones University to evaluate its processes and procedures for responding to reports of sexual abuse and specifically to ensure the University maintained best practices for a legally compliant and loving, scripturally based response to such reports.

To accomplish this, the Board of Trustees appointed a committee external to BJU to review our policies and procedures. The committee recommended some policy revisions and also that the University appoint an independent ombudsman to review past instances in which it was alleged that the University may have underserved a student who reported they had been abused at some point in their lives.

BJU subsequently engaged GRACE as the ombudsman. In addition to working with GRACE, BJU independently implemented a number of initiatives to raise awareness of sexual abuse. BJU provided live Sexual Abuse Awareness Training to all 3000+ students and 1000+ faculty/staff members—unprecedented in institutions of higher education—and is creating guidelines to assist present and future students who work with minors in the community and on campus. BJU also is working to provide a comprehensive Child Safety Workshop for local church leaders this spring.

Over the last several months, we grew concerned about how GRACE was pursuing our objectives, and on Jan. 27, 2014, BJU terminated its contract with GRACE. It is BJU's intention to resolve its differences with GRACE, and we are disappointed a resolution could not be reached before our differences were made public. Both BJU and GRACE desire to raise sexual abuse awareness and minister to victims whose lives have been ravaged by abuse. GRACE has been helpful in assisting us in focusing our efforts in this area.

BJU sincerely appreciates all current and former students who participated in this initiative thus far, and the University regrets any delay BJU's cancellation of its agreement with GRACE may have on this important project.

We grieve with those who have suffered abuse in their past, and we desire to minister the grace of Christ to them. Our prayer for the abused is that God will be their refuge and strength.