Aiming for ‘Effective Anger’: The Top 50 Countries Where It’s Hardest to Be a Christian

Aiming for ‘Effective Anger’: The Top 50 Countries Where It’s Hardest to Be a Christian

Twice as many Christians were killed for their faith in 2013 as in 2012, according to the latest report on the world's top 50 violators of Christian religious freedom.

However, the 2014 World Watch List (see full list below) from Open Doors International—which notes the increased impact of "failed states" and reveals its methodology for the first time—calculates a far lower total for Christian martyrdoms than recent estimates by other groups.

The top 10 nations "where Christians faced the most pressure and violence," according to the WWL, were North Korea, Somalia, Syria, Iraq, Afghanistan, Saudi Arabia, Maldives, Pakistan, Iran, and Yemen. While North Korea has topped the list for 12 straight years, this is the first time that a sub-Saharan African country took the No. 2 slot.

"Overall, the 2014 list determines that pressure on Christians increased in 34 countries, decreased in five, and remained about the same in the remaining 14," reports World Watch Monitor. The level of persecution "increased seriously" in eight countries: Syria, Iraq, Pakistan, Sudan, Libya, Egypt, Colombia, and Kazakhstan. By contrast, it "decreased considerably" in two countries: Mali and Tanzania.

The list's biggest debut: the Central African Republic (CAR), where strife between Muslims and Christians has displaced 1 million people and threatens to spread beyond the country's borders, the United Nations recently warned.

"Like Mali last year, CAR shows how rapidly a seemingly stable state can disintegrate and a Christian minority or even majority can come to the brink of extinction," said Open Doors in its press release. The CAR surged from being unranked to No. 16, much as Mali surged from unranked to No. 7 last year. (Mali has now fallen to No. 33.)

When only incidents of violence—including murders, rapes, kidnappings and church burnings—are assessed, the CAR ranks No. 1 worldwide, followed by Syria (though it produced far more martyrs). Rounding out this top 10: Pakistan, Egypt, Iraq, Myanmar, Nigeria, Colombia, Eritrea and Sudan. (The WWL's overall rankings include both physical violence and other pressures against Christians, and Open Doors notes that violence is not the most prevalent form of religious persecution.)

The rapid rise of the CAR illustrated an increase of persecution in "failed states," according to Open Doors. Six of the WWL's top 10 countries—Somalia, Syria, Iraq, Afghanistan, Pakistan, and Yemen—fit the organization's definition of a failed state: "a weak state where social and political structures have collapsed to the point where government has little or no control."

The report showed "the importance of a stable state as a guardian of religious liberty," said Ronald Boyd-MacMillan, chief strategy officer who oversees the WWL, in an interview released by the organization.

The rankings continued last year's trends of increased persecution in African nations and by Islamist extremism, which drove persecution in 36 of the 50 WWL countries, according to the new report.

The difficult practice of measuring Christian martyrdoms worldwide drew scrutiny this year. Estimates range from 1,000 to 100,000. World Watch Monitor explains why the WWL count is so low.

In determining the degree of persecution, the report's methodology separately assesses governmental and societal persecution. A groundbreaking 2009 report by the Pew Forum on Religion & Public Life found a high correlation between social hostilities and government restrictions. CT charted the comparisons between the Pew list and the WWL.

Open Doors claims the WWL is "the only annual survey of religious liberty conditions of Christians around the world," and explains:

[The WWL] measures the degree of freedom Christian have to live out their faith in five spheres of life – private, family, community, national and church life, plus a sixth sphere measuring the degree of violence. The methodology counts each sphere equally and is designed specifically to track the deep structures of persecution, and not merely incidents.

For the first time, Open Doors has published the methodology of the report, also having it independently audited by the International Institute for Religious Freedom, which praised the study.

"Above all, we want others to join in and help improve our standards and catalyze more study of the Persecuted Church, so that the sum of our knowledge will increase," Boyd-MacMillan said.

The purpose of the report is to "create effective anger," leading people to pray and act on behalf of persecuted Christians, he said. "It creates awareness and it requires a strategic response. And great research is the only way that effective anger can be produced."

Reports like the World Watch List, and those we produce at Pew Research Center, stimulate discussion and action among groups such as the United Nations, the European Parliament and the U.S. Congress. In 2011 alone, the sources used in the latest Pew Research study reported that 76 percent of countries had government or societal initiatives to reduce religious restrictions or hostilities.

CT reported on the WWL rankings in 2009, 2012, and 2013, including a spotlight on where it's hardest to believe. CT also noted how the State Department and USCIRF disagree on which countries deserves censure for mistreating religious minorities, as well as how, ironically, many nations on the WWL are bad for Christians but good for distributing Bibles.

Here is a summary of the 2014 World Watch List and how countries changed rank from 2013. Descriptions of persecution in all 50 countries can be found here. 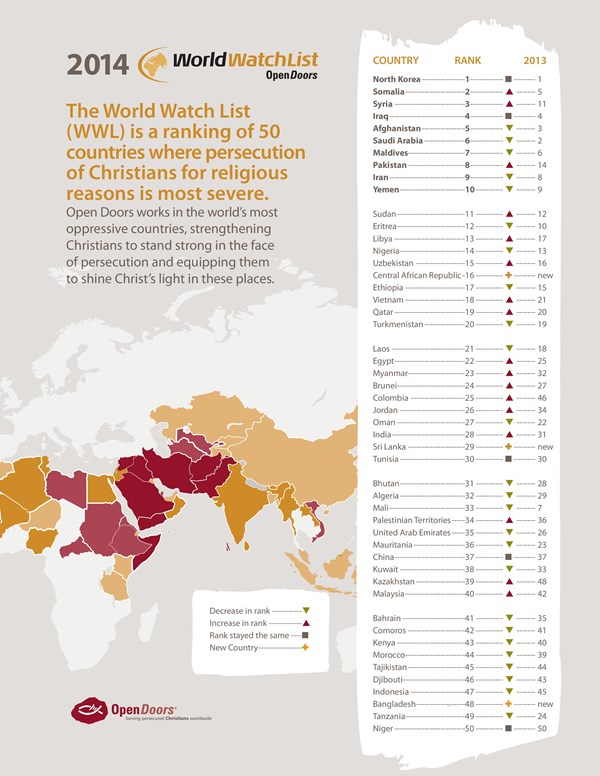