Oklahoma man claims he was tortured, nearly beheaded in Syria because of Presbyterian church’s online announcement.
Kate Tracy|June 17, 2014 10:25 AM 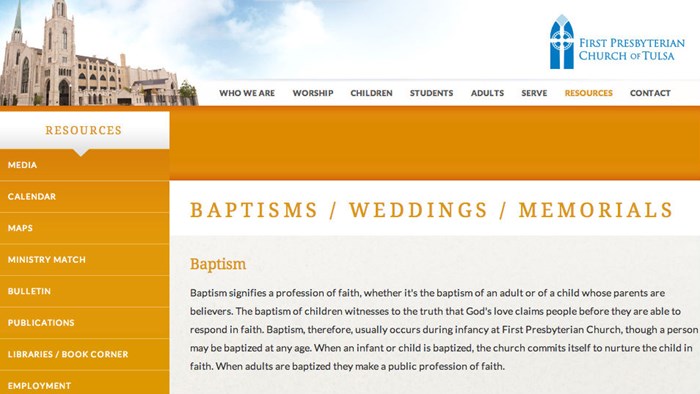 A Muslim convert to Christianity has sued his Oklahoma church and its pastor for negligence after the church announced his baptism online. He alleges that the announcement caused disastrous consequences on his trip back home to Syria, where he was tortured and almost executed by Muslim extremists.

The convert seeks $75,000 or more in punitive damages to discourage other churches from announcing the Christian conversions of other former Muslims.

Lawsuits only tell one side of the story. But according to the June 9 filing, the man was privately baptized in December 2012, a few weeks before making a regular trip to Damascus. He had repeatedly asked for the baptism to be done privately for his safety, and he alleges that he secured a promise from First Presbyterian Church of Tulsa to keep the baptism private. But a few days after arriving in Syria, the Oklahoma church allegedly published an announcement on its website that he had been baptized.

Soon after the news of his baptism went online, the convert alleges that he was beaten by Muslim extremists in Damascus, who told him they had read about his baptism on the internet. Even after denying his conversion, the man was held captive and tortured for days before he managed to escape and return to the United States.

The lawsuit claims that a murder sentence exists against the convert in Syria, where his son still lives and his business and possessions are now forfeit. The convert, who has permanent resident status but is not yet a U.S. citizen, is asking for $75,000 in retribution from the church that allegedly inadvertently prompted his persecution.

"The Defendants were either grossly negligent or deliberately indifferent to Plaintiff's safety by publicizing his baptism and conversion to Christianity," states the lawsuit.

"We understand the skepticism toward the claim," attorney Keith Ward toldTulsa World, "but his injuries and all the allegations are well documented."

"I cannot share more details with you because this is a matter in litigation," pastor James D. Miller told his PC(USA) congregation in a letter later sent to Tulsa World. But addressing "the entire Tulsa community," he stated:

The lawsuit is brought by a person who received the Sacrament of Baptism before the congregation during a regular Sunday service at First Church. As the facts and truth of these events are revealed during the judicial process, it will become clear that First Church followed its normal procedures in baptizing this person and the claims made in the suit are not proper.

CT noted how Christian leaders in Sweden urged priests not to baptize Muslim converts because of persecution risks, as well as the case of Meriam Yahia Ibrahim, the Sudanese mother of two sentenced to death and 100 lashes for allegedly converting from Islam and committing adultery.

CT has published a testimony from a former Muslim, covered the controversial conversion of Ergun Caner, a former Liberty University seminary dean, and explored why Muslims are becoming the best evangelists.

CT also regularly reports on baptism, including why most Southern Baptists aren't baptizing very many millennials, and whether spontaneous baptisms are healthy for the church.