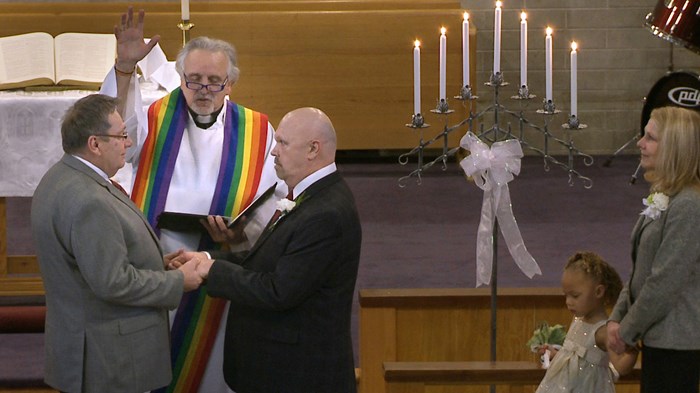 Update (June 13): Nearly 90 Methodist conservatives have signed a response to the unity proposal by prominent pastor Adam Hamilton and other progressives, claiming it "will only extend, localize and exacerbate the acrimonious debate over the issue."

"Irreconcilable" disagreement over same-sex unions is once again prompting debate over splitting the historic United Methodist Church (UMC), one of America's largest denominations.

"If we are one church, we cannot act as if we are two. If, in reality, we are two churches, it may not be wise to pretend any longer that we are one," concludes a statement last month from 80 traditionalists from across the UMC, which has 7.7 million U.S. members. (An additional 4.4 million members are overseas.)

The statement says the UMC is facing a crisis in four areas because:

* Pastors and other leaders realize that there are no "meaningful consequences" for violating the Book of Discipline by officiating at a same-sex union. (In one instance, two clergy were given a "24-hour suspension without pay" for marrying gay couples.)

* More church leaders believe "significant parts of the Scriptures do not provide an accurate understanding of God's heart and mind and may be discarded as uninspired and in error."

* Among top leaders, "there are dramatic differences in how personal and social holiness is lived out and taught."

"We can no longer talk about schism as something that might happen in the future. Schism has already taken place in our connection," said Maxie Dunnam, chancellor of Asbury Seminary and leader in the Good News movement for evangelical Methodists, in comments to Good News magazine.

"There are conscience-bound persons who find it impossible to live in the United Methodist Church as we presently define ourselves in relation to human sexuality," said Dunnam. "Forty years of wrestling with the issue is enough." The first disagreements among United Methodists over homosexuality began four decades ago. Back in 2004, traditionalist leaders tried, but failed, to move forward a proposal for an amicable breakup of the denomination that traces its heritage to John and Charles Wesley.

Many traditionalists say their differences with progressives are now "irreconcilable." The UMC, the largest of the historic mainline denominations, has been holding the conservative line on homosexuality for years. Two other major mainline groups, The Episcopal Church and the Evangelical Lutheran Church in America (ELCA), permit the blessing of same-sex unions and credential openly gay clergy. The Presbyterian Church (U.S.A.) now allows ordination to occur without reference to its fidelity/chastity clause. In 2012, conservative PC(USA) members created the Evangelical Covenant Order of Presbyterians to uphold bans on same-sex unions and openly gay clergy.

The statement by Dunnam's group follows the controversial actions of UMC bishop Martin McLee of New York. In March, McLee announced that he was dropping formal charges against Thomas Ogletree, an 80-year-old retired pastor and former Yale Divinity dean who was accused of breaking church law by officiating at his son's same-sex wedding ceremony in 2012.

"Church trials produce no winners," McLee said. "Church trials result in harmful polarization and continue the harm brought upon our gay and lesbian brothers and sisters." (After a 2013 trial, the church defrocked Frank Schaefer for officiating at his son's 2007 same-sex marriage.)

McLee, instead of putting Ogletree on trial, pledged to convene a public forum for healing, dialogue, and sharing perspectives on human sexuality. He also said, "I call for and commit to a cessation of church trials for conducting ceremonies which celebrate homosexual unions or performing same gender wedding ceremonies."

McLee's actions are counter to the UMC's Council of Bishops. This executive branch of the church in November 2011 went on the record stating the church's bishops would uphold the Book of Discipline. Also, the General Conference, meeting in 2012, reaffirmed that "homosexual acts are incompatible with Christian teaching."

At the 2012 meeting, about 40 percent of all delegates came from overseas, where the Methodist church is growing rapidly. Most of the overseas delegates from Africa, Asia, and Latin America endorse traditional Christian teaching.

But the UMC's powerful Judicial Council has succeeded in bending the stringent rules somewhat. In late April, the Judicial Council said that the UMC's 13 agencies were legally permitted to redefine "spouse" to include the same-sex partners or spouses in states where such marriages or unions are legal. They ruled that providing such spousal benefits, such as health insurance, did not break the rule against using church funds "to promote the acceptance of homosexuality."

In the meantime, many progressives are endorsing "A Way Forward," a proposal to grant each local UMC church the authority, by super-majority vote of its members, to approve of same-sex unions and marriages and to "welcome" same-sex clergy. The plan also endorses giving each Annual Conference (regional administrative bodies worldwide) permission to decide on whether to ordain "practicing homosexuals."

The plan has influential backers, including: Adam Hamilton, senior pastor of the 18,000-member Church of the Resurrection in Kansas, and David McAllister-Wilson, president of Wesley Theological Seminary in Washington D.C. Hundreds of local church leaders have signed the statement online, which describes itself as a "conversation starter, not a perfected conclusion."

At the grassroots, schism is unpopular. A June poll, commissioned by a UMC agency, indicates that rank and file UMC members are opposed to a church schism over homosexuality. "We found that regardless of a person's position on homosexuality, members felt strongly that the church could offer a positive and different voice to the broader conversation occurring in society today," said John Deuterman, president of Corporate Research, which conducted the survey for the UMC Communications agency.

"They overwhelmingly reject the idea that the disagreements over this issue were justification for splitting the church."

Nothing definitive is likely to occur before 2016. That's the year the UMC will convene in Portland, Oregon, its next General Conference—the legislative body of the global church with authority to speak for the entire denomination.