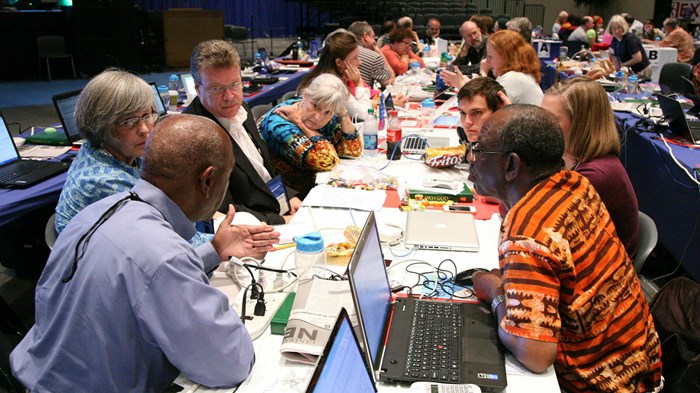 The new "authoritative interpretation" of the Presbyterian Church (U.S.A.)'s Book of Order gives individual pastors discretion to perform same-sex ceremonies where the practice is legal. The addition, which passed a general assembly vote 317–238, states:

teaching elders may conduct a marriage service for any such couple in the place where the community gathers for worship, so long as it is approved by the session; or in such other place as may be suitable for a service of Christian worship. In no case shall any teaching elder's conscience be bound to conduct any marriage service for any couple except by his or her understanding of the Word, and the leading of the Holy Spirit.

The assembly also voted to change the definition of marriage in the Book of Order, the denomination's governing constitution. The proposal changes language referring to marriage as a "civil contract between a man and a woman" to marriage as "a unique commitment between two people."

The new definition, which must be approved by the PC(USA)'s 172 presbyteries, says in part:

Marriage is a gift God has given to all humankind for the well-being of the entire human family. Marriage involves a unique commitment between two people, traditionally a man and a woman, to love and support each other for the rest of their lives. The sacrificial love that unites the couple sustains them as faithful and responsible members of the church and the wider community.

The same paragraph in the old definition reads:

That motion, which passed 429–175, must be approved by 87 of the denomination's 172 presbyteries in order to be incorporated into the Book of Order in 2015.

The Pittsburgh Post-Gazetteoffers a thorough account of the votes and their implications.

Some at the meeting were concerned that the move would encourage a continuing conservative exodus from the denomination, ongoing since the PC(USA) discussed the ordination of clergy in same-sex relationships in 2010 and approved the change in 2011. An estimated 350 congregations have left the PC(USA) for more conservative denominations since then, reports the Post-Gazette; the Associated Press puts the total at 428 congregations.

[T]he General Assembly has committed an express repudiation of the Bible, the mutually agreed upon Confessions of the PCUSA, thousands of years of faithfulness to God's clear commands and the denominational ordination vows of each concurring commissioner. This is an abomination.

The Presbyterian Lay Committee mourns these actions and calls on all Presbyterians to resist and protest them. You should tell your pastor and the members of your session that you disapprove of these actions. You should refuse to fund the General Assembly, your synod, your presbytery and even your local church if those bodies have not explicitly and publicly repudiated these unbiblical actions.

PC(USA) moderator Heath Rada said at a news conference that he thought the measures passed because many Presbyterians were tired of being defined by the controversy over same-sex marriage, reports The New York Times.

In a press conference after the vote, Hunter Farrell, director of Presbyterian World Mission, estimated that 17 of the PC(USA)'s 54 global mission partners would break relationships with the PC(USA) if same-sex marriage is approved.

Last year, the PC(USA) experienced its largest annual membership loss in nearly 50 years. Membership declined by 5 percent in 2013, with 148 congregations leaving for other denominations. In 2012, conservative Presbyterians launched the Evangelical Covenant Order of Presbyterians (ECO), saying the PC(USA) was "too consumed by internal conflicts and bureaucracy to nurture healthy congregations," Religion News Service reported.

CT has reported on membership drops in the PC(USA), including the decision of John Ortberg's church to leave for ECO, renewal group strategies, and other stories about Presbyterians.