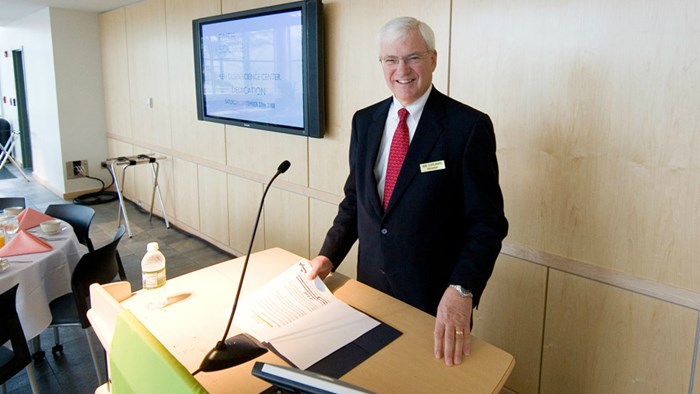 R. Judson Carlberg, one of Christian higher education’s most influential leaders until his retirement from Gordon College in 2011, has died. He was 74.

Carlberg served Gordon College for 35 years, including nearly 20 years as its president. He passed away early Thursday morning, November 20, at the Kaplan Family Hospice House in Danvers, Massachusetts, after a battle with cancer.

“Jud Carlberg was a giant in the field of Christian higher education,” said Gordon President Michael Lindsay, who succeeded Carlberg in 2011. “He also had a formidable influence within the wider academy, earning the respect of scholars and administrators around the world. He was not only a great leader for Gordon College, but also a wonderful mentor and friend. He will be deeply missed but never forgotten.”

Following retirement, Carlberg served as chairman of BioLogos Foundation, a non-profit organization that Francis Collins, the Christian physician-geneticist and current director of the National Institutes of Health, founded several years ago. Biologos describes itself as an organization that seeks “potential harmony between scientific insights about nature and biblical truths about God's hand in creation.”

“Jud was everything that a leader should be—deeply committed to Christian principles, loving in every way, visionary but realistic, firm but always gracious,” Collins told Christianity Today in comments via email. “Stricken by serious illness over the last few months, he modeled for all of us how to face death with courage, humor, and deep faith.”

Carlberg began his career at Gordon in 1976 as dean of faculty. From 1990 to 1992 he served as senior vice president for development, and in 1992 he was inaugurated as Gordon’s seventh president.

“Jud genuinely reflected the institution he led,” said Stan Gaede, Gordon College scholar-in-residence and longtime friend. “Like the College, he kept growing and learning—not in spite of what he believed but because of it. Like the College, Jud was more interested in living the core of the Gospel than straining at gnats. In his leading Jud was always a learner.”

In May 2012, Carlberg spoke at Gordon’s commencement and shared about his medical battle against three kinds of cancer. According to one website account:

The Carlberg’s have a wonderful Thanksgiving tradition. They ask each guest to take three slips of paper and write down three things they are thankful for. During his cancer treatments, they weren’t able to have any guests. But Jud and his wife, Jan, still filled in their three slips of paper. On his last slip he wrote, “I am thankful for cancer. James 1:2-3.” As he put it, “Life is richer, trust is stronger and relationships are deeper.”

Denver Seminary President Mark Young said of Carlberg, “There was little doubt that Jud’s voice was the most respected in the room, a status well-deserved. But there was an undercurrent of safety in his razor-focused questions and perfectly placed pearls of wisdom. Jud willed me to trust him by the sheer strength of his person. And I did. I trusted him to do what was right and noble and above reproach.”

A memorial service is currently scheduled for Saturday, January 17, 2015, on Gordon’s campus in Wenham, Massachusetts.