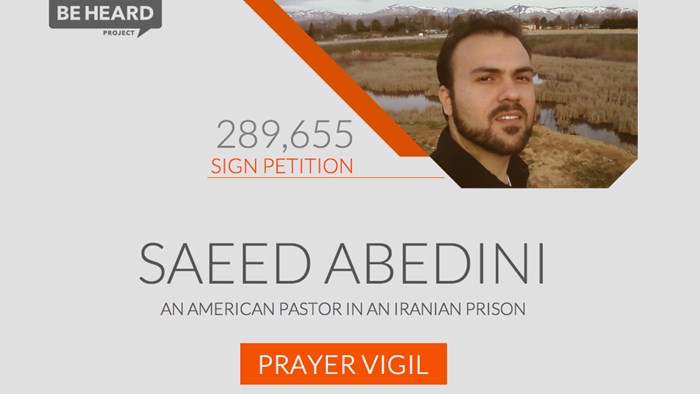 Image: Screenshot of Save Saeed campaign

Update (Sept. 29): World Watch Monitor reports on the new translation of the Bible into modern Persian and how some of its contributors were martyred.

Supporters of Christians in Iran observed two significant milestones this week—one discouraging and one encouraging.

Two years ago, Idaho pastor Saeed Abedini made one of his frequent trips to Iran. A convert from Islam to Christianity, the Iranian-American citizen had been warned by the Muslim nation against his involvement with house churches, so he had returned instead to continue building a government-approved orphanage. While there, Abedini was pulled off a bus, charged with undermining national security, and sentenced to eight years in prison.

The sentence has resulted in torture and beatings and pressure to recant for Abedini, whose American wife and two children live in Boise, Idaho. His release has been requested by Billy Graham, President Obama, Secretary of State John Kerry, and the United Nations.

Today more than 460 prayer vigils will be held in 30 countries and territories to draw more attention to his plight on the second anniversary of his imprisonment.

“Pastor Saeed has become the face of the persecuted Christian church worldwide, one of many Christians around the world who face imprisonment, beatings and even death for their faith,” said Jordan Sekulow, executive director of the American Center for Law and Justice (ACLJ).

However, Abedini is only one of at least 60 Christians in Iran—which contains between 200,000 and 750,000 Christians—currently in prison, according to Middle East Concern (MEC).

“A worrying development is the serious charges being leveled against church leaders,” MEC noted. In August, a leader within the Church of Iran denomination was charged with "moharebeh," which means “enmity against God” and can carry the death sentence. Since then, he has also been charged with "mofsed-e-filarz," which translates to "spreading corruption on Earth." This charge also carries the death sentence, MEC said.

Two other Christians have also been charged with “mofsed-e-filarz,” which has traditionally been applied to political or religious dissenters. More than 8,000 people have likely been executed under this charge since 1979, according to MEC, which is also concerned about eight men killed for “moharebeh” already this year.

Elam Ministries is championing the cause of Farshid Fathi, who has been imprisoned for twice as long as Abedini and was recently relocated to the same prison. Activism on Abedini's behalf has dwarfed activism on Fathi's behalf. The "Save Saeed" campaign has garned 290,000 supporters, while the "Free Farshid" campaign has yet to break 4,000.

Voice of the Martyrs highlights Fathi and two other Iranian pastors on its alert list of 16 notable imprisoned Christians. Of notable released prisoners, Iran's Youcef Nadarkhani was jailed for 1,062 days.

This summer has been a tough one for Iranian Christians. Iran has been stepping up persecution of house churches, including torture and beatings, Morning Star News (MSN) reports.

The assaults are meant to scare those who belong to house churches, one observer told MSN. “These beatings are not being kept hidden at all. It’s being done to make it quite visual when relatives come to the prison to visit. If they see what happened and they pass on the information to the church community; it’s a tactic of intimidation.”

As a tactic, it appears to be backfiring. Iran is seeing a record number of conversions, according to Elam. The crackdown seems to be making the faith more appealing to Iranians disillusioned with their government.

And this week, Elam celebrated a "massive milestone" for the Iranian church: a new translation of the Bible from the original Hebrew and Greek into Persian.

In an email to supporters, Elam's U.S. director David Yeghnazar announced that 500 Chrisitan leaders from 40 countries came to London for the dedication ceremony of the New Millennium Version. "The meeting was a magnificent proclamation of the global church's commitment to the Bible," he stated.

The project's original translator was murdered shortly after it began in 1994; the first copies were given to family members of other Iranians martyred for their faith. (Full announcement below.)

Iran has been designated a Country of Particular Concern since 1999 by the U.S. Commission on International Religious Freedom. This summer, Congress created a special envoy to promote religious freedom in the Middle East, but the position has not yet been filled.

CT has reported on Abedini’s sentencing, torture, and pressure to convert back to Islam, along with the best way to help save him. CT also covered house pastor Yousef Nadarkhani’s imprisonment and release, and talked with Maryam Rostampour and Marziyeh Amirizadeh after they spent eight months in Iran’s most notorious prison for their faith.

CT's previous coverage of Iran includes how it is one of the world’s hardest countries in which to be a Christian, but also one with excellent evangelists and a record number of baptisms.

How I wish all of you could have been with us on Monday night. Over five hundred people, mainly Chrisitan leaders, came to London for the dedication service of Elam's new translation of the Bible in Persian. Over a hundred had flown in specially for the meeting from about forty different countries. The meeting was a magnificent proclamation of the global church's commitment to the Bible.

It was a tremendous honour that Juliet Michaelian, the widow of Rev.Tateos Michaelian, was with us for the dedication. In May 1994, right at the start of this Bible project, Elam's director, my father Sam Yeghnazar, had written to his friend Tateos Michaelian, Iran's most experienced translator, asking him to take a leading role in the work. He accepted the invitation, but one month later Tateos Michaelian was shot dead. He was murdered for his faith.

It was fitting that the translation project was then called, 'The Michaelian Project'. It was a very emotional moment on Monday evening when my father gave the very first copy of the new Bible to Tateos Michaelian's widow, Juliet. The next copy was given to Tateos Michaelian's grand-daughter. Copies were then also given to the members of other families who had endured the martyrdom of a loved one in recent years.

My father also presented the new Bibles to the project co-ordinator, Rev. Dr Mehrdad Fatehi and his wife Mojdeh, the chief administrator and also an exegetical checker. They led a team of over thirty translators and specialists for nearly twenty years. Every single verse was checked to ensure the text was the most accurate translation possible from the original Hebrew or Greek.

Then the Bibles - which are beautifully bound - were handed round the whole auditorium. There was then an intense time of intercession for the hundreds of thousands of Iranians who will soon receive this new translation which is known as the 'New Millennium Version'.

The title for our evening was, 'New Bible, New Iran'. We believe that when a country receives a new translation of the Bible, the church is always strengthened.

On behalf of Elam and the church in Iran I would like to thank all of you who have stood with us over the last twenty years. With your prayers and generous giving you have played your part in making this new translation a reality.

1. God's protection on the Bibles as they flood Iran.

2.Thank God for this first printing of the new translation.

3. God's blessing on the lives of all those involved in the translation.