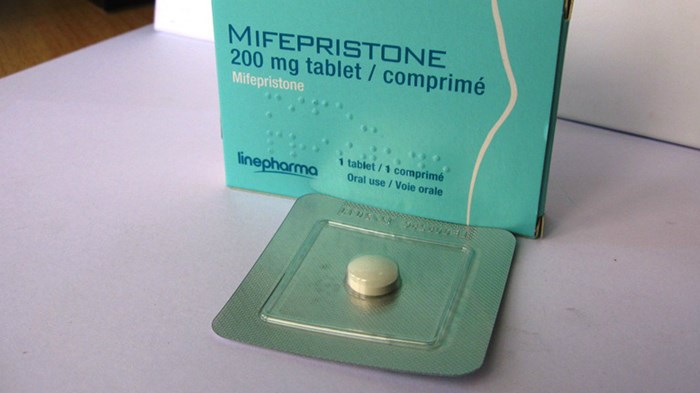 Image: LinePharma
Mifepristone is the first of two drugs women take to chemically end a pregnancy.

About one year ago, Rebecca Medina, a 25-year-old nursing student in Orange County, California, faced a defining moment in her life. Conflicted about having an abortion, she took the 200 mg mifepristone abortion pill at the last possible moment, took a nap, and when she woke she realized she had made a horrible mistake. She wanted her unborn child to live.

“Something was telling me not to. I went back and forth. ‘I want to do it; no I can’t do it.’ I hadn’t dated the baby’s father very long. I had eight months nursing school yet to go and thought I am not ready. I need to finish school. It just wasn’t convenient,” she said.

But she sat down at a computer and Googled this question: "Is it possible to reverse the abortion pill?” She clicked on a website, AbortionPillReversal.com. She called their 800 number and the person who answered told her about a new little-known procedure, using progesterone, to counteract mifepristone, potentially allowing the pregnancy to continue to term. It has to be used as soon as possible after taking mifepristone.

In her case, it worked. Her son, Elijah Gabriel, is now four months old. “People don’t know about [abortion pill reversal]. People I went to nursing school with had not heard about it.”

Hundreds of pro-life physicians are throwing their support behind the abortion pill reversal process that—to date—has saved the lives of unborn children whose mothers took the abortion pill and then changed their minds.

“Many women are ambivalent about their abortion decision, and there is increasing evidence that many abortions are coerced. These women welcome the opportunity to reverse their initial decision, and should be given accurate information about this process,” said physicians Mary L. Davenport, director of public policy, and Donna J. Harrison, executive director of the American Association of Pro-Life Obstetricians and Gynecologists (AAPLOG) in a statement. The association, based in Eau Claire, Michigan, has 2,500 members.

The reversal process received a huge boost recently when Arkansas and Arizona enacted informed-consent legislation. The new laws require abortion providers to give pregnant women extensive information about their pregnancy, including the possibility that a chemical abortion might be reversible.

Abortion-rights supporters call the reversal process “junk science” and “tantamount to quackery.” “I find the new junk science measure signed into law in Arkansas so deeply disturbing,” wrote Planned Parenthood (PP) physician Vanessa Collins in a MedPage Today commentary. “The new law mandates that physicians inform patients seeking an abortion about medically untested and unproven claims that medication abortions can somehow be ‘reversed’—despite widespread opposition from medical experts across the country and a complete lack of medical evidence to back this up.”

So far, there is one study indicating that the process works. In December 2012, The Annals of Pharmacotherapy, a peer-reviewed journal, published an article detailing the reversal process. But critics say the article is flawed because it involved too small a sample (six women), and mifepristone, when taken alone, has a high failure rate.

But AAPLOG said, “As of March 31, 89 babies have been born and dozens more unborn babies are alive following progesterone reversal of mifepristone. Only one minor birth defect, a port-wine stain, has occurred in this group thus far; this does not appear related to the mifepristone or progesterone. More than 200 physicians are part of a national network providing this service to women.”

Physicians use the abortion pill to end a pregnancy during the first 49 days of gestation. Women take medication on day one and return on day three for additional medication to complete the pregnancy termination. More than 1.5 million women have used the abortion pill, trademarked as Mifeprex.

An Escondido, California, family physician, George Delgado, is among the first to offer abortion pill reversal as part of his regular practice. He informs pregnant women of this service through the website AbortionPillReversal.com. A coauthor of the journal article, Delgado told the UT San Diego newspaper, “I don’t think there’s any reason to stop what we’re doing now, which is connecting women who have changed their minds with doctors who are willing to help them. As we go along, we can do more comprehensive studies.”

Americans United for Life, a leading prolife organization, drafted the model legislation that Arizona and Arkansas used in writing the new informed-consent laws. “Informed consent laws are constitutional,” said Charmaine Yoest, AUL president. “The Supreme Court has repeatedly upheld this vital health and safety standard. In Planned Parenthood v. Casey, the court upheld a Pennsylvania informed-consent law that required providers to give women information on the nature of the procedure.”

“The importance of the laws in Arizona and Arkansas is informational,” said Mailee Smith, AUL attorney. “We want to tell women they can change their minds but that time is of the essence. The prolife movement would like to equip women with information. And the abortion industry is so set on ensuring a dead baby that they can’t even tell women they can change their minds.”

As more pro-life groups learn of the process, more are endorsing its use. Abby Johnson, former director of a Planned Parenthood clinic and founder of And Then There Were None, a ministry to abortion clinic workers, told CT that the reversal process has her approval.

“I’ve met several of the women and their babies who have gone through the abortion pill reversal process. It’s just a beautiful thing,” she said. “Many times [women are] pressured to abort, and they take that pill and they immediately feel regret. For so many years, at Planned Parenthood they [have been] told, ‘Well, sorry, there’s nothing [that] can be done.’ We [Planned Parenthood] told them, ‘If you take the mifepristone in the clinic and you don’t abort your baby, your baby is going to have severe birth defects.’”

Johnson said that her outreach to clinic workers is bearing fruit—148 clinic workers have left the abortion business in the past 3 years in part due to the efforts of her ministry.