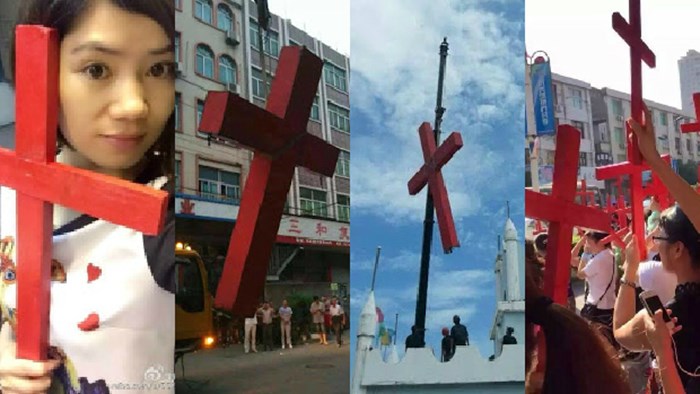 Update (Aug. 4): Several churches held a prayer service outside a government office yesterday, holding up crosses and banners that read, "Can't remove the cross in our hearts," reports the Union of Catholic Asian News.

The cross dispute is "destined to become one of the 'pain points' in the history of the [Chinese] church’s development," wrote Lude Wang in a Pushi Institute for Social Science analysis highlighted by ChinaSource.

"At its core, the Zhejiang Cross Dispute has revealed that in light of the backdrop of a new society, neither the church nor the state has sufficiently prepared to enter into a mature and constructive dialogue; nor have they shown a readiness to settle their differences and conflicts on the basis if the rule of law," she wrote. "How the church will coexist within a community holding different values to itself is an urgent question."

The government of "China's Jerusalem" has torn down hundreds of giant red crosses from church buildings over the past two years. Now Chinese Protestants and Catholics are joining together to put red crosses—albeit much smaller ones—back in the public eye.

In an online campaign, church leaders in the eastern province of Zhejiang have called on Christians to craft hundreds of small wooden crosses, paint them red, and display them at home or on their cars.

“Each time they take a cross down, we will put more up,” one church leader, speaking on the condition of anonymity, toldThe Guardian. “We are even considering making flags and clothes with cross patterns. We will make the cross flourish throughout China.” 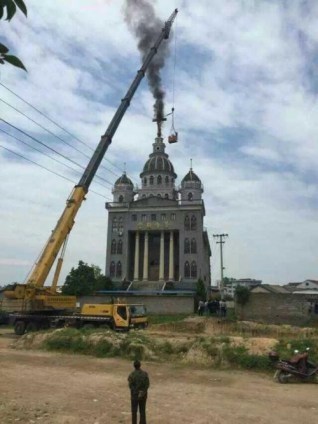 The removal campaign began in 2013, but hit Christians hardest last summer. Hundreds of crosses were removed, sometimes along with the demolition of entire churches.

Christians protested, at times sitting in front of their building or cross to protect it. More than 100 people were detained or arrested in connection with cross removals in 2014, Christian Solidarity Worldwide (CSW) reported. Another 38 were beaten or injured during protests.

Cross removals decreased last fall, and seemed to die out altogether over the winter, but picked up steam again this spring. In May, 17 crosses were removed. In July, 10 more. (CSW compiled an interactive timeline.)

Also in May, the government released new guidelines for church crosses: They must be short, no more than one tenth the height of the building’s facade. They must be unobtrusive, painted a color that blends in with the building. And they must be placed on the building, not above it. The rules mean that most remaining church crosses, which are usually red and elevated above the building, must be removed. (ChinaSource notes one Chinese pastor's six questions challenging the regulations. China Aid notes a Wenzhou pastor's explanation of the cross removals.) 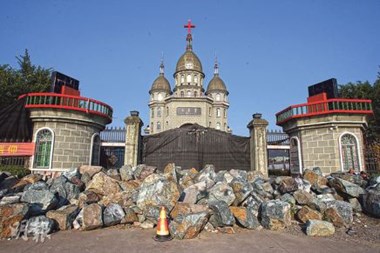 Christians are losing patience with the campaign, according to an open letter from Catholic leaders in Wenzhou, the Zhejiang city known as "China’s Jerusalem" because of its one million Protestants and about 300,000 Catholics.

“Our diocese has been patient and reasonable—again and again we have shown tolerance, prayed, communicated and observed, hoping that the haze would clear,” the leaders wrote. “But they have not stopped. Rather, they have escalated the campaign and have rushed to attack the cross, the symbol of peace and love.”

“The ongoing campaign to forcibly remove crosses and demolish churches in Zhejiang has had a profoundly negative effect on Catholic and Protestant churches in the province,” CSW’s chief executive Mervyn Thomas said. “Many church leaders have patiently and repeatedly tried to negotiate and enter into dialogue with the local authorities; the protests and petitions by leaders and lay Christians are a sign that their concerns have not been addressed.” 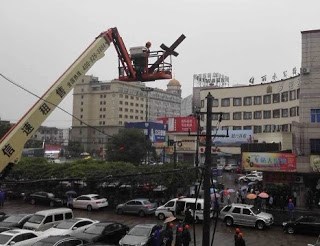 So on July 4, members of one newly cross-less church staged a sit-in, holding banners that said “lift up the cross” or “protect religious freedom.” In late July, about 20 priests protested outside government offices. “Maintaining religious dignity and opposing the forced removal of crosses,” their banner read.

At the same time, a group of Christian human rights lawyers has joined forces to fight for religious freedom, calling themselves “Lawyers for Protection of the Cross.”

Last week, 16 Protestants were arrested on charges of “obstructing official duty” and “running an illegal business,” but their lawyer argues they were arrested for refusing to allow their cross to be taken down.

“Tomorrow you will see crosses everywhere in Zhejiang,” he wrote.

CT has carefully followed the cross removals in China, from the beginning of the campaign last May to the resurgence of removals this spring, including how a human shield failed to save a megachurch from demolition last May and how the persecution is prompting Chinese Christians to self-reflect.