Discriminatory state funding cuts lead 48 schools to stay shut. Leaders pledge: ‘We will not back off until we receive our full rights.’
Timothy C. Morgan|August 31, 2015 10:05 AM 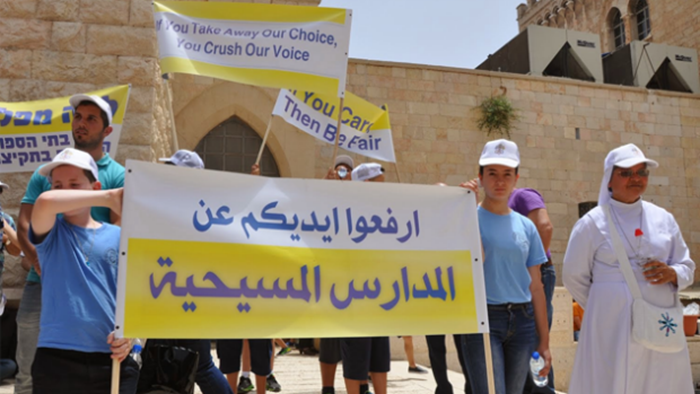 Israel’s Christian schools will go on strike tomorrow, the first official day of the school year, after talks with the Jewish state’s president and Ministry of Education broke down over a steep reduction in state funding.

The strike will keep out of the classroom about 33,000 mostly Arab students at 48 “unofficial but recognized” independent schools across Israel. Primary education will be the most affected. Starting later this week, parents, students, and educators are prepared to demonstrate publicly to protest the funding shortfall.

“The ministry started a systematic campaign against our schools by unilaterally cutting its support from about 45 percent … to 29 percent of the total cost of a primary school,” said the administrators of the 48 schools in a joint statement [full text below]. In past years, this funding gap has been closed with tuition and charitable donations. But new state regulations limit such solutions.

“Recently [the ministry has] even tightened the noose around our necks with regulations limiting the percentage of tuition we can charge,” said the statement. “This is a death strike that will prevent our schools from being able to work!”

A compromise seemed to be in the works after Naftali Bennett, Israel’s minister of education, and Reuven Rivlin, Israel’s president, met last week with top Christian educators. But in recent days in followup meetings, the sides were unable to resolve their differences over funding.

The Christian school administrators have asked for full funding so that parents would not have to pay tuition. This would put Christian schools on an equal footing with state schools. The cost for such funding has been estimated to be $52 million per year.

The state has offered full funding if the schools agree to become “official and recognized” as part of the state educational system with preservation of their “special” standing as Christian schools. But Christian leaders have rejected this offer as giving up too much of their independence.

“We have seen that the proposed sum [from the ministry] does not close the huge gap that years of cuts have created and does not stop the policies of discrimination that that we have endured for years,” said the school administrators in their joint statement. Formal talks over the funding gap started last year.

Botrus Mansour, head of Nazareth Baptist School, told CT, “I can’t judge on their intentions, but the outcome is negative and they brought us to a dead end. They did not see the need and the value of these schools, and the need to remedy the situation through equality.”

Some of the Christian schools rank among Israel’s most academically successful, and many existed before the state of Israel was founded in 1948. According to state assessments, Christian Arabs have the highest rate of success in Israel’s Bagrut (matriculation) exams, which largely determine who is admitted to a state university.

The students at Christian schools are about half Christian and half Muslim, and the schools instruct students in traditional academic subjects, the Bible, and Christian doctrine. Many of the schools are run by the Roman Catholic Church. They admit students regardless of their faith background.

Israel has 1.4 million students in K—12 schools. The ministry provides full funding for 200,000 ultra-Orthodox students in religious, nonpublic schools. The Israeli educational system is one of the most comprehensive in the Middle East.

In their statement, the Christian administrators said, “We assure you that we have not done this lightly but only after a long study and careful thinking. We will not back off until we receive our full rights. We will also hold several protests that will accompany the strike.”

The Ministry of Education has yet to comment officially on the strike.

Here is the full statement from Christian educators:

Christian Schools have been offering their educational services to the children of the Holy Land, from all faiths and denominations, for hundreds of years. The churches and monasteries that own these schools have developed the school buildings and facilities and strengthened the educational and moral message based on the love of God and man. We have been categorized for decades as “Recognized and Unofficial” schools and have been partially funded by the Ministry of Education. However, the policies of the Ministry of Education in the last few years have been drying up these educational institutions. The Ministry started a systematic campaign against our schools by unilaterally cutting its support from about 45%, compared to what was before, to 29% of the total cost of a primary school. The Ministry of Education also closed the door for advancement by not allowing our primary school teachers to participate in training courses designed for teachers. They even prevented Ministry instructors from working with our teachers and thus our teachers are prevented from developing in their academic fields. Recently they have even tightened the noose around our necks with regulations limiting the percentage of tuition we can charge – this is a death strike that will prevent our schools from being able to work!

In order to stop this attack on our schools, the negotiation team that was appointed by the administrative forum of the Office of Christian Schools held intensive and long meetings with government ministries and even the Knesset. They also met with high-ranking foreign officials to explain the crisis to the local and foreign press.

This work has been going on for over a year and a half and included direct negotiations with a committee from the Ministry of Education who suggested that we become “Official schools”. This suggestion was rejected. This government committee also suggested that we become “Special Schools” so that we would be able to collect higher tuition, but this will put a heavy load on the parents. We rejected that too and asked for an increase in the percentage of funding for our schools, equalizing us with other schools that are under the same category.

When we learned that these proposals would lead to an increase in school tuition, at the expense of the parents, and would hurt our educational message, we stopped the negotiations and held a warning demonstration on the 27th of May 2015 in front of the Ministry of Education building in Jerusalem in the presence of 5 bishops, tens of nuns and clergymen and 9 members of the Knesset, in addition to hundreds of parents and staff. The Ministry of Education not only held its position, it accelerated its steps in the northern region by releasing warning letters to several of our schools threatening to not allow the renewal of these schools’ licenses.

Due to the failure of the negotiations, Israeli president Mr. Reuven Rivlen initiated a meeting and invited the negotiation committee and the Minister of Education to his home on the 24th of August. The announcements after this meeting were positive and as a result, the representatives of the ministry and the Christian schools met in order to try to reach an agreement over the budgets. But these meetings failed because the proposed increase did not comply with the minimum demands of the schools and we found that their purpose was just to win time and stop all our protests.

We have seen that the proposed sum does not close the huge gap that years of cuts have created and does not stop the policies of discrimination that that we have endured for years. Therefore we have decided on a series of protest steps starting with an open strike on the 1st of September and we assure you that we have not done this lightly but only after a long study and careful thinking. We will not back off until we receive our full rights. We will also hold several protests that will accompany the strike.

We trust that our parents will understand the steps we are taking and will stand, with God’s assistance, beside their schools and institutions. We commit to compensate the students for any educational loss when this crisis is over and we look forward to the return of our students to school in the near future, by God’s grace.

“If God is with us then who can be against us.”

The Office of Christian Schools in Israel

School’s Still Out for Summer as Israeli ...