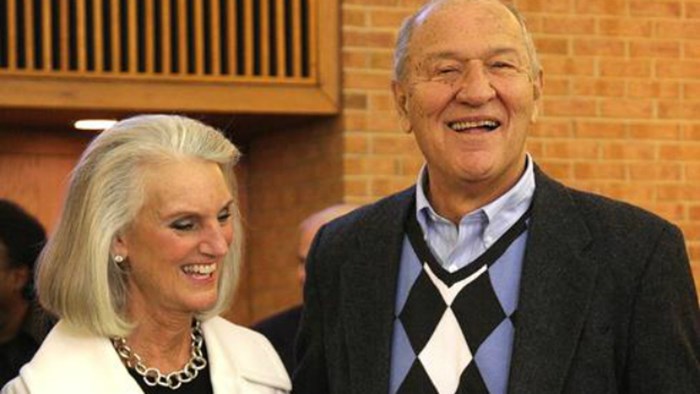 Update (Aug. 28): The funeral service for Danny Lotz will take place on Sunday, August 30, 3 PM EDT at Providence Baptist Church in Raleigh, North Carolina. It will be live streamed via www.annegrahamlotz.org/live-stream-danny-lotz/, according to a press statement.

A full obituary is available here.

[Update, Aug. 19]: Anne Graham Lotz announced this afternoon that her husband, Danny, whom she found unresponsive in the family's swimming pool on Monday, has died. He was 78.

A tribute to Lotz was posted on www.annegrahamlotz.org this afternoon:

Danny and Anne were married for forty-nine years. At the age of fifty Danny developed a severe case of Adult 1 diabetes. For over ten years following his retirement from dentistry he fought the ravages of the disease, earning him the beloved nickname, God’s Gladiator. He lost the sight in one eye and the hearing in one ear. His heart disease required five stents in his arteries. His renal failure dictated three days of dialysis each week, five hours each time. And yet he never complained, never slowed down, never gave up, never stopped investing in the lives of others. As a New Yorker he was plain spoken. As a German he was stubborn. As a Christian he was a compassionate servant leader. He was more than a man’s man. He was God’s man who triumphantly finished his race having fought the good fight, and having kept his faith firmly focused on the kingdom of God first.

He moved to our Father’s House on August 19, 2015 and received the accolade of his Savior, Lord, and King who presented him with the Crown of Righteousness. We salute you, Danny Lotz. And we will never forget you.

Lotz was being treated at Rex Hospital, associated with the University of North Carolina, Raleigh. The hospital said that Lotz's heart stopped while he was swimming in the family pool.

According to the call to 911 emergency dispatch, Anne discovered her husband face-down in the water. "He's in the water. He's huge. I can't get him out. I'm just trying to hold his head above water," she said.

On arrival, emergency medical personnel restarted his heart, and he was admitted to the intensive care unit.

"Since then, a team of compassionate medical professionals at Rex’s ICU has worked tirelessly to restore Dr. Lotz’s body. Every possible attempt was made, but his doctors determined this morning nothing more could be done and it was time to cease life-supportive measures," the hospital said in a statement today.

During his years at UNC, he was a member of the famed 1957 basketball team that notched a 32-0 season and won the national championship. He helped launch the Fellowship of Christian Athletes (FCA) in North Carolina.

“Our hearts are heavy today at the news of the passing of Danny Lotz however, we rejoice that he is with his Savior,” said FCA President and CEO Les Steckel. “There are few families whose lives have been more centered around FCA than that of the Lotzes." FCA inducted Lotz into its Hall of Champions in 2002.

All three Lotz children were active in FCA and Anne was a FCA Huddle leader. Lotz was a leader with Bible Study Fellowship for over 25 years.

Thank you for your prayers as we walk through this valley of the shadow. Danny is holding his own. The next twenty-four hours are critical and should give us some answers.

This I call to mind and therefore I have hope; Because of the Lord’s great love we are not consumed, for his compassions never fail. They are new every morning. Lamentations 3:21-23

God’s faithfulness is great. We rest in His love and sovereign will

"The family appreciates any and all prayers," the ministry told CT.

About 3:45 p.m., Monday, Anne Graham Lotz discovered Danny, her 78-year-old husband, unresponsive in the swimming pool at their home in Raleigh, North Carolina.

Emergency crews from the Bay Leaf Fire Department responded to the scene and took the son-in-law of evangelist Billy Graham to an unnamed hospital.

"[Danny] is currently in a hospital ICU receiving excellent care. There are no answers yet as to the outcome. The family is standing firm in faith, trusting Jesus. Thank you for your prayers."

According to one local media report:

[A Graham family friend, Jim Young] said Lotz has suffered from diabetic seizures for the past several years, and is on dialysis, which has required hospital visits in the past. It’s unclear if his diabetes had anything to do with this near-drowning, Young said. Young said Lotz leads a Bible study every Friday with 80-100 men in Raleigh and he’s done that for the past 30 years.

Local North Carolina TV news offers this video report from the scene. The couple was married in 1966 and have three adult children. Danny Lotz worked as a dentist in North Carolina.

In February, Lotz, a "living legend" in North Carolina for playing on the famed 1957 UNC basketball team that won a national championship, was honored with the Order of the Long Leaf Pine award by the North Carolina governor.

The prestigious award is granted to citizens for extraordinary service to the state and local community. Lotz was cited for his outreach through the Fellowship of Christian Athletes (FCA).

“He’s a living legend as far as his work with FCA and being a member of the national championship team that went 32-0,” said Albert Long, a 1955 Carolina graduate who earned seven varsity letters and is the only athlete in ACC history to letter in four sports, according to a local media report. Lotz and Long both are in the national FCA Hall of Fame. “He’s very modest, very humble,” said Long, a longtime, close friend who co-hosts and helped to cofound the Thursday Bible study at UNC with Lotz.