LifeWay survey finds only a third of Americans have worshiped as a minority, and half didn't last a year.
Bob Smietana - Facts & Trends|January 15, 2015 10:32 AM 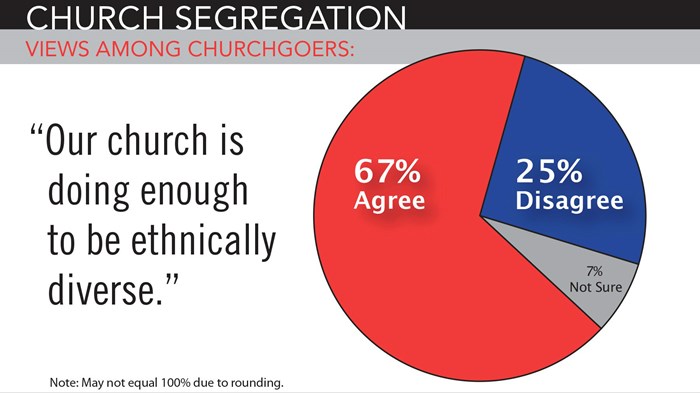 Sunday morning remains one of the most segregated hours in American life, with more than 8 in 10 congregations made up of one predominant racial group.

And most worshipers think their church is fine the way it is.

Two-thirds of American churchgoers (67 percent) say their church has done enough to become racially diverse. And less than half think their church should become more diverse.

Those are among the findings of a study of church segregation by Nashville-based LifeWay Research. Researchers surveyed 994 churchgoers—who attend worship at least at holidays or more often—about race and the church. They also surveyed 1,000 Americans as well as 1,000 Protestant senior pastors. 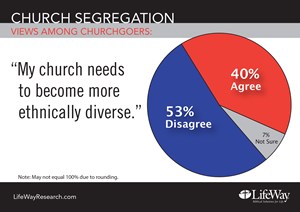 Churchgoers, researchers found, are lukewarm about diversity. More than half (53 percent) disagree with the statement, “My church needs to become more ethnically diverse.” Four in 10 agree.

Researchers also found churchgoers who oppose more diversity do so with gusto. A third (33 percent) strongly disagree that their church needs to be more diverse. More than 4 in 10 (42 percent) felt strongly their church was doing enough.

African Americans (51 percent) and Hispanic Americans (47 percent) were more likely to say their church needs to be more diverse. 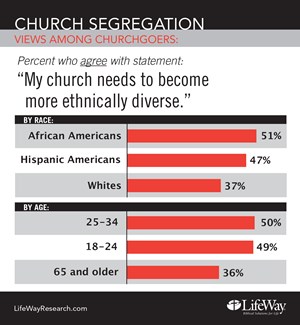 “Surprisingly, most churchgoers are content with the ethnic status quo in their churches,” said Ed Stetzer, executive director of LifeWay Research. “In a world where our culture is increasingly diverse, and many pastors are talking about diversity, it appears most people are happy where they are—and with whom they are.”

“Yet, it’s hard for Christians to say they are united in Christ when they are congregating separately,” Stetzer said.

Not long after giving his famed “I Have A Dream” speech during the March on Washington in 1963, Martin Luther King Jr. was invited to lecture on race at Western Michigan University.

In a question-and-answer session after the lecture, King said Christians in the United States fail to live out the tenets of their faith.

A previous study of Protestant pastors by LifeWay Research found more than 8 in 10 (86 percent) have congregations with one predominant racial group. The National Congregations Study found a similar lack of diversity in houses of worship.

As part of the study on segregation, LifeWay Research also surveyed 1,000 Americans about race. They found only about a third (34 percent) of Americans have regularly attended a house of worship where they were a minority.

Among those who had attended a church as a minority, one in five said their ethnicity hindered their involvement. Of those who have not been a minority in church, nearly a quarter (22 percent) say being a minority in a congregation would make them feel uncomfortable. 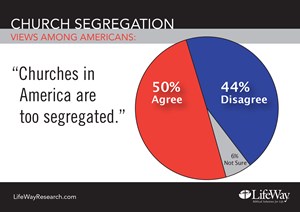 Still, many Americans believe churches should be more diverse. Half (50 percent) agree with the statement, “Churches in American are too segregated.” Four in 10 (44 percent) disagree.

“It’s fair to say churchgoers in communities with little ethnic diversity perhaps cannot relate to a multi-ethnic expectation,” Stetzer said. “But in urban settings, other ethnic groups are not far away."

In a survey of 1,000 Protestant senior pastors, LifeWay Research found many have some diversity in their professional and social circles. 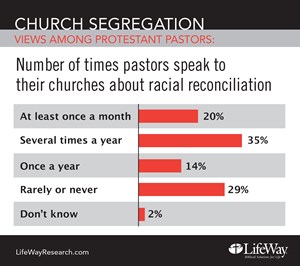 Still, for many pastors, the issue of racial reconciliation seldom comes up in sermons. Four in 10 (43 percent) say they speak on the issue once a year or less. Twenty-nine percent of pastors rarely or never do.

About a third (35 percent) speak several times a year. In addition, one in five speak about race at least once a month.

“The Bible talks a lot about men and women from every tongue, tribe, and nation being in heaven, so it might be good to get accustomed to that heavenly expression here and now,” said Stetzer.

The phone survey of 2,000 Americans was conducted September 19 to October 5, 2014. The calling utilized random digit dialing. Sixty percent of completes were among landlines and 40 percent among cell phones. Maximum quotas and slight weights were used for gender, region, age, ethnicity, and education to more accurately reflect the population. Responders were screened to only include Christians who attend a religious service on religious holidays or more often. The completed sample is 994 surveys. The sample provides 95 percent confidence that the sampling error does not exceed plus or minus 3.5 percent. Margins of error are higher in sub-groups. (Christian includes Catholic, Protestant, Nondenominational, and Orthodox).

The phone survey of Americans was conducted September 26-October 5, 2014. The calling utilized Random Digit Dialing. Sixty percent of completes were among landlines and 40 percent among cell phones. Maximum quotas and slight weights were used for gender, region, age, ethnicity, and education to more accurately reflect the population. The completed sample is 1,000 surveys. The sample provides 95 percent confidence that the sampling error does not exceed plus or minus 3.5 percent. Margins of error are higher in sub-groups.

The phone survey of Protestant pastors was conducted September 11-18, 2014. The calling list was a stratified random sample drawn from a list of all Protestant churches. Each interview was conducted with the senior pastor, minister or priest of the church called. Responses were weighted by region to more accurately reflect the population. The completed sample is 1,000 surveys. The sample provides 95 percent confidence that the sampling error does not exceed plus or minus 3.5 percent. Margins of error are higher in sub-groups.