World Relief disagrees with half of US governors and Franklin Graham.
Sarah Eekhoff Zylstra|November 17, 2015 02:30 PM 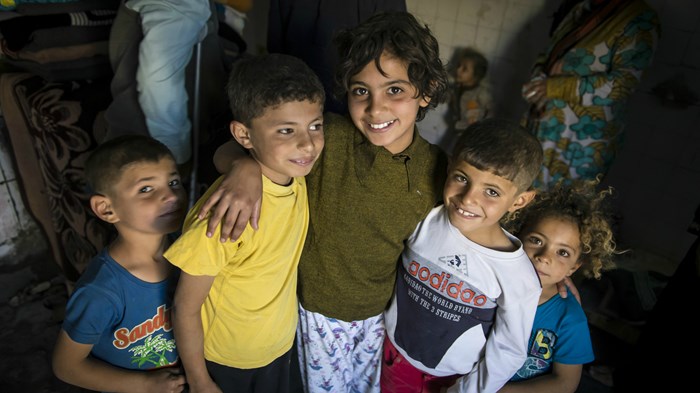 In response to the terrorist attacks in Paris last week, 27 American governors have announced that they are closing their states to refugees attempting to relocate from Syria.

“I am directing all state agencies to suspend the resettlement of additional Syrian refugees in the state of Indiana pending assurances from the federal government that proper security measures have been achieved,” Indiana governor Mike Pence stated. “Indiana has a long tradition of opening our arms and homes to refugees from around the world but, as governor, my first responsibility is to ensure the safety and security of all Hoosiers."

In an open letter to President Barack Obama, Texas governor Greg Abbott wrote, "Neither you nor any federal official can guarantee that Syrian refugees will not be part of any terroristic activity. As such, opening our door to them irresponsibly exposes our fellow Americans to unacceptable peril."

Though the announcements may be purely symbolic, they are still a disappointment, said Matthew Soerens, US director of church mobilization for World Relief, which opposes the governors' decisions [full statement below].

“Jesus was a refugee himself,” Soerens told CT. “The journey Jesus took when fleeing to Egypt as a boy looks a lot like what little Syrian boys and girls have done in the past five years.”

“Of course we want to keep terrorists out of our country, but let’s not punish the victims of ISIS for the sins of ISIS,” said Leith Anderson, president of the National Association of Evangelicals. “Our system is designed to keep terrorists out and to help desperate families with little children. We want to help the victims of terrorism in the Middle East, not punish them.”

The gubernatorial decisions are in direct opposition to President Obama’s September announcement that the US will begin taking in more refugees in response to the crisis in Syria and Iraq. Obama raised the refugee limit to 85,000 this fiscal year (including 10,000 from Syria), and 100,000 for fiscal year 2017.

Those who were most unhappy with his decision: white evangelicals. Just 31 percent said they approve of raising the refugee cap, much lower than the 58 percent of black Protestants (two-thirds of whom identify as evangelicals) and 51 percent of overall Americans who approved, according to a recent study by the Pew Research Center.

“There is a lot of fear about resettling Muslim refugees,” Jenny Yang, vice president of advocacy and policy at World Relief, previously told CT. “There is fear about them becoming terrorists or implementing Shari’ah law.” A Reuters/Ipsos poll in the wake of the Paris attacks found that 52 percent of Americans think nations which accept Syrian refugees are less safe, and are equally split over whether countries should continue to accept refugees (40%) or stop accepting them (41%) amid terrorism concerns.

One prominent voice of concern: Franklin Graham. "We must reform our immigration policies in the United States. We cannot allow Muslim immigrants to come across our borders unchecked while we are fighting this war on terror," wrote the head of the Billy Graham Evangelistic Association and Samaritan's Purse on his Facebook page shortly after the Paris attacks. "If we continue to allow Muslim immigration, we'll see much more of what happened in Paris—it’s on our doorstep. France and Europe are being overrun by young Muslim men from the Middle East, and they do not know their backgrounds or their motives and intentions." In July, Graham advocated for an end to Muslim immigration in America.

Last year, a Pew survey found that 70 percent of white evangelicals believed that “Islam encourages more violence than other religions.” The number was the highest of any demographic group, and 20 points higher than the 50 percent of Americans who felt the same way.

A new PRRI survey released today asked a different question, but found similar results: 73 percent of white evangelicals said Islam was at odds with American values, compared with 56 percent of all Americans. 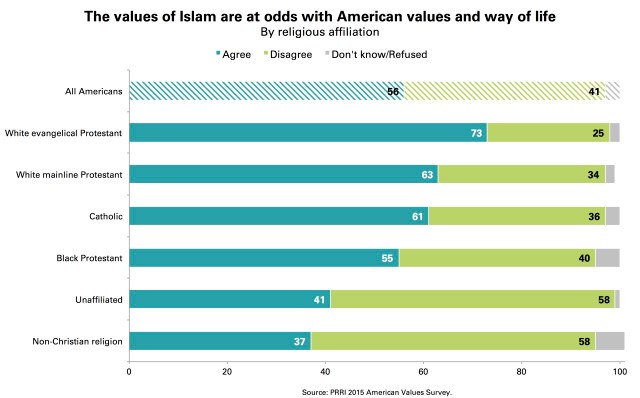 The US has resettled 2,184 Syrian refugees since March 2011, when Syria's civil war began. Of those, seven percent have been men between the ages of 21 and 30. The largest age group: children under 14 (43%). Overall, nearly all (96%) have been Muslims (mostly Sunnis), with the 53 Syrian Christians resettled composing only 3 percent.

By comparison, the US has resettled 68,707 Iraqi refugees over the same time period. Of those, 12 percent have been men between the ages of 21 and 30, with children under 14 again the largest age group (27%). Overall, nearly 7 in 10 are Muslims, with the 21,126 Iraqi Christians resettled composing 30 percent of the total.

The UN High Commissioner for Refugees (UNHCR) has referred about 16,000 Syrians for resettlement in the United States, but only 1,500 have arrived so far, Larry Yungk, a UNHCR senior resettlement officer in Washington, D.C., told the Chicago Tribune for its profile on how resettlement works and how the ban would affect Illinois. Politico reports that only 2 percent of Syrian resettled so far are "military-aged males unattached to families."

It’s understandable that people are afraid after what happened in France, Soerens said. But the refugees from Syria—or anywhere else—that enter the United States have been vetted by multiple agencies for a minimum of 18 months, he said.

“The US has been settling refugees since the 1970s and admitted more than 3 million,” he said. “No one from that program has attacked anyone.” Those admitted to the US are victims, not perpetrators, he said. And the largest religious group that’s admitted? Christians.

“The refugee resettlement program has been a way the US has been able to serve the persecuted church,” he said. As ISIS moved through Syria and Iraq last year, thousands of Christians fled in the face of rape, kidnapping, and murder.

More than 11 million Syrians are now displaced—half the country’s population, he said. Of the 4 million who have fled the country, most are in the neighboring countries of Lebanon, Jordan, or Turkey. About 2,200 have been allowed to resettle in the US.

“The US is looking at a drop in the bucket in the terms of overall need,” he said. “We think it would be tragic for us to not even do that amount when the need is so significant.”

On the other hand, mass immigration may not be the best way to help the persecuted church abroad.

“We are hearing from Christians on the ground in the Middle East that many wish to stay in their homeland, and we want to strengthen the Christians who remain in these volatile areas,” said Kristin Wright, advocacy director at Open Doors USA.

Open Doors is petitioning Secretary of State John Kerry and USAID ambassador Alfonso Lenhardt, asking them not for immigration help but to ensure that aid is reaching the most vulnerable, that efforts to defeat ISIS are strengthened, and that there is long-term investment in the region.

“The United States and UNHCR recognized that, for most refugees, safe, voluntary return to their homelands was the preferred solution,” the report stated.

Of course, that’s not always possible. The US resettled nearly 70,000 refugees last year, the report said. Of those, about 32,000 were from the Near East/South Asia region.

Many churches will be waiting to welcome them with open arms, World Relief president Stephan Bauman told CT previously.

“Whether it’s hosting refugees in our own country, or supporting churches serving them in other countries, the American church has chosen to act,” he said.

Muslims are our neighbors, the same way the Samaritan—with his heretical beliefs—was the neighbor in need Jesus used in his parable, Soerens said.

“With the government doing its job of screening and vetting, our role can’t be to ask, ‘Is this safe?’” he said. “We have to ask, ‘Who is my neighbor?’”

Statement by World Relief on Paris and Beirut attacks:

We are deeply saddened by the horrific acts of violence that recently occurred in Paris and Beirut. We join Christians throughout the world in praying for the victims and their families, as well as the survivors, that they may find peace and safety again in their countries. We also pray for the ongoing loss of life in Syria, Yemen, and elsewhere where conflicts rage. These are the areas from which people are fleeing to find security and safety, leaving behind their countries, their families and their lives to start anew.

“As information about these attacks continues to pour in, we ask that Christians and churches across the United States continue to pioneer the way for a compassionate response to the ongoing refugee crisis,” said Stephan Bauman, President and CEO of World Relief. “The only way to fight this darkness is by offering these refugees the love and light of Jesus Christ. Instead of allowing ourselves to be consumed by fear, we must ground ourselves in love and open our arms to these refugees. It would be a mistake to shut out all refugees who have been victims of the same sort of terror inflicted last week upon Paris and Beirut based on these concerns,” he continued.

The U.S. refugee resettlement system continues to be a lifeline to desperate individuals fleeing violence and conflict from all over the world. Most of those resettled in the United States are women and children. Last year, the United States resettled more Christians than any other religious tradition primarily because Christians have been uniquely targeted for persecution in various parts of the world. Welcoming carefully vetted refugees is an important way to assist these persecuted individuals, where the United States can and should do more in the face of increased persecution.