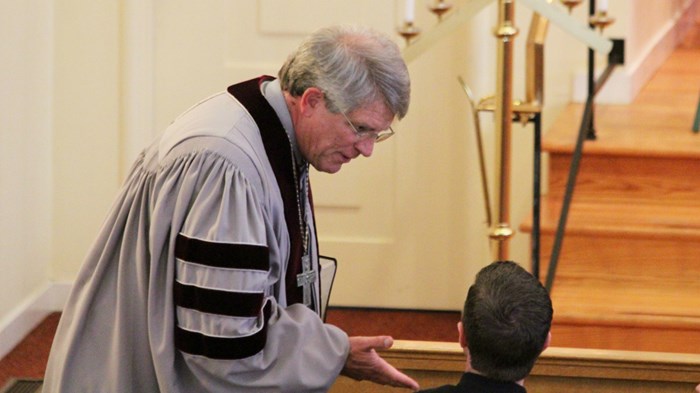 The wages of battling sin are getting better for men and women of the cloth.

Non-Catholic clergy have experienced significant increases in income even as their work weeks declined by more than 15 percent in recent decades, according to a major new study of clergy compensation published in the Journal for the Scientific Study of Religion. (While the non-Catholic category was primarily Protestant, it did include a small number of non-Christian clergy, the study said.)

The study is believed to be the first to take into account the benefits clergy receive in the form of housing allowances or living in church-provided residences, which usually cause difficulty in any wage comparison of clergy to the general public.

Overall, in inflation-adjusted wages, non-Catholic clergy made $4.37 more per hour in 2013 than they did in 1983. That figure is more than double the wage increase of the average worker with a college degree.

Over the past 37 years, the average income for American workers was $49,225; non-Catholic clergy earned $46,216. Put another way, the general population averaged $21.20 an hour, while church clergy pulled in $18.85 an hour. (Clergy that worked elsewhere, like in hospitals or administration, earned $21.79 an hour.)

Like most everyone else in this age of increasing economic inequality, clergy continue to fall financially behind elite professions such as doctors, lawyers, and hedge fund managers, the study found.

But the price of their calling is declining as the wage gap that separates them from other college-educated Americans shrinks, according to the study, which used Current Population Survey data from 1976 to 2013.

Just how much? The study found clergy are gaining financial ground faster than more than 9 in 10 Americans with college degrees.

Still, not everyone is better off. There are vast differences in the situations of individual clergy, from those serving small rural or urban churches who often work for low wages without benefits to the high-end salaries of some prominent megachurch pastors. Catholic priests are by far on the low end of the scale, earning about half as much as other clergy. (Priests earned an average of $26,605, or $12.11 an hour, in 2013.)

But the overall picture for clergy is generally one of improvement in both wages and working conditions.

The 35 highest-income occupations in the US, from investment bankers to physicians to engineers, are running away from everyone else. But excluding those professions, the income gap between clergy and other college-educated Americans is shrinking.

From 1983 to 2002—a period where occupational codes allowed more direct comparisons—non-Catholic clergy earned 32 percent less than other Americans with college degrees, excluding the top 35 professions. By 2002, the gap decreased to 26 percent.

Wages rose at an even higher rate. The $4.37 per hour boost in pay for non-Catholic clergy was more than double the $2 an hour increase for other working Americans with a college degree.

“It seems likely that the implementation of denominational minimum salaries, the trend toward housing allowances rather than manses, and improved benefits packages all have contributed to improved clergy compensation in recent decades,” noted study authors and sociologists Cyrus Schleifer of the University of Oklahoma and Mark Chaves of Duke University.

That is nearly the same as the average 41-hour work week for other workers of similar education, according to the study.

The decline may be attributable in part to the fact Americans are spending less time in church—it is rare today to have Sunday evening or midweek services requiring separate sermons.

As in society overall, there is also an increasing recognition by clergy and their employers of the need to have a healthy balance between work and home.

“[Clergy] are not motivated by money, but they are motivated to take care of their family,” sociologist Cynthia Woolever, co-author of Leadership That Fits Your Church, said in an interview.

A place of their own

Living in a parsonage next to the church used to be the norm.

Having their own homes away from the church not only helps preserve the privacy of ministers and their families, but is a financial asset with great potential for building equity.

Clergy working as chaplains, teachers, administrators or in other nonchurch settings make 19 percent more than their peers working in congregations, the study found.

It appears easier for clergy working for larger organizations such as schools and hospitals to receive more competitive salaries and benefits than clergy dealing with the boards of individual congregations.

Those who switch to the pastorate are likely choosing second careers for personal satisfaction, and are thus more likely to accept a lower salary, Woolever said.

So are clergy underpaid? Yes and no, the researchers wrote.

Clergy salaries are still lower than the pay of many college-educated Americans.

But wages and working conditions overall are improving. Clergy also receive less tangible benefits, such as the joy they receive from doing work they are passionate about, researchers said.

More than 6 in 10 clergy say they are “very happy” in their work; just 32 percent of other Americans express similar satisfaction, according to General Social Survey data from 1972 to 2010.

All things considered, Schleifer and Chaves wrote, it is difficult to conclude that “clergy are underpaid relative to other workers.”

Editor’s Note: A recent study of more than 4,000 pastors by the National Association of Evangelicals found that half make less than the national median household income of $51,939, one-third have less than $10,000 saved for retirement, and most (87%) were somewhat or complately satisfied with their compensation.

David Briggs, a former national writer for the Associated Press who holds a master’s degree from Yale Divinity School, writes the Ahead of the Trend column on new developments in religion research for the Association of Religion Data Archives.