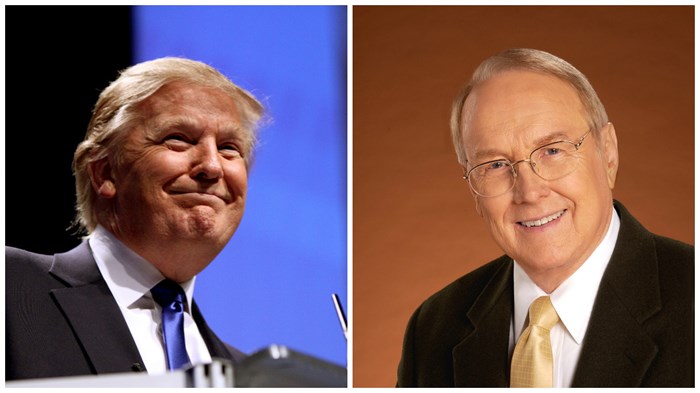 James Dobson didn’t realize his off-the-cuff remarks about Donald Trump’s faith would set off so many questions about the Republican candidate’s alleged recommitment to Christ.

The former Focus on the Family leader, who has endorsed Trump, publicly addressed the situation for the first time in a letter sent to followers today, stating he “didn’t waffle on anything” when he had to clarify that he didn’t know the exact details of Trump’s relationship with Jesus.

I talked that day to what seemed like 500 people in a 15-hour period ending at 11:30 p.m. One of those well-wishers was carrying a recording device, and he suddenly appeared before me and held a microphone in my face. He asked for my impressions from the day.

I spoke candidly for about 20 seconds, as I recall. Then he disappeared. By the next morning, millions of people were talking about my saying I had heard during the day that a minister had led Donald Trump to a relationship with Christ. I didn’t elaborate because I said all I knew.

The man with the recorder was Pennsylvania pastor Michael Anthony, and Dobson told him that Trump “did accept a relationship with Christ” and “really made a commitment, but he’s a baby Christian.”

Trump, whose awkward referrals to Jesus as “somebody I can revere in terms of bravery” and communion as “my little wine … and my little cracker” have made evangelicals cringe, describes himself as a Presbyterian who goes to church “when I can.” Few Americans consider Trump to be very religious, according to the Pew Research Center.

Pastor Jentezen Franklin, who sits with Dobson on Trump’s evangelical advisory board, told the Gainsville Times that the candidate said he rededicated his life to Christ a decade ago.

Some of the mainstream media jumped on Dobson’s comments, leading him to point to controversial televangelist Paula White as the source of the potential “born again” incident. In an interview with Trump, Mike Huckabee also referred to the close relationship between White and Trump, calling her his “spiritual counselor and advisor.”

“My conversations with Paula, who I adore, (are) a great reminder to me that you are willing to listen to spiritual counsel from people who you know and you trust,” Huckabee told Trump.

With little evidence of repentance, many questioned the claim.

Baptist blogger and seminary professor Denny Burk agreed, tweeting that “if true, we’d rejoice w/arms open. But if ‘baby Xtian’ means ‘Xtian with no fruit,’ how does this change anything?”

If anything, Trump’s candidacy is revealing the inner secularization of the evangelical movement, where evangelical no longer means something many would recognize as properly Christian, Westminster Seminary–California professor Michael Horton wrote for CT.

But that doesn’t mean Trump is a hopeless case.

Trump “lives a life of loving and helping others as Jesus taught in the Great Commandment,” said Jerry Falwell Jr., who endorsed Trump early on.

Later he added, “Jesus said ‘Judge not, lest ye be judged.’ Let’s stop trying to choose the political leaders who we believe are the most godly because, in reality, only God knows people’s hearts. You and I don’t, and we are all sinners.”

Pew recently examined whether Americans see Trump as a religious man (few do, and few care), as well as whether they want their president to be religious.

Overall, Trump and Hillary Clinton have weekly churchgoers unusually split. Most evangelical laypeople say they are voting for Trump—though most not for Trump—while most evangelical leaders have not supported his candidacy in past polls.

[Photos courtesy of Gage Skidmore/Flickr and Focus on the Family]