New report details when workers' faith expression is protected and when it can get them fired.
Kate Shellnutt
December 02, 2016 3:26 PM 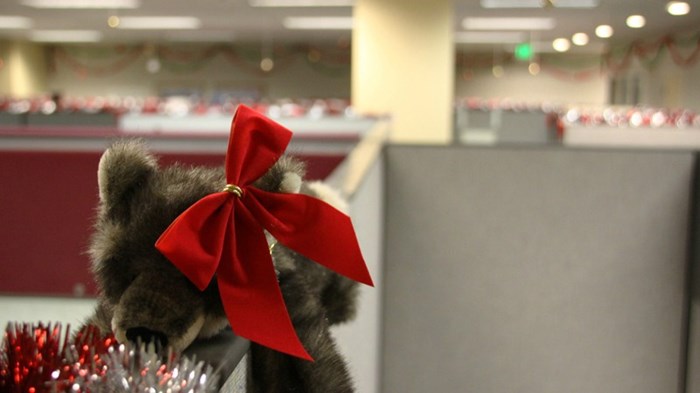 British officials are encouraging the country to put Christ back in Christmas—even in their workplaces.

“There are a lot of myths out there when it comes to dealing with religion at work. I want to put the record straight: It is OK to hold a party and send Christmas cards,” said David Isaac, chairman of the national Equality and Human Rights Commission.

This week, Christians and politicians alike welcomed Isaac’s assurance following the growing prevalence of more generic terminology in public and office celebrations, such as “season’s greetings” and “Winterval.”

“We have a very strong tradition in this country of religious tolerance and freedom of speech, and our Christian heritage is something we can all be proud of,” Prime Minister Theresa May responded. “We all want to ensure that people at work do feel able to speak about their faith and also feel able to speak quite freely about Christmas.”

The assessment highlighted examples of Christian employees who were wrongfully discriminated against at work, including a daycare worker fired for responding to a question about homosexuality and a British Airways employee banned from wearing a cross necklace at the check-in desk. The report concluded that courts rightly ruled in their favor and against their employers.

In other cases, including a local government employee who used her work account to send emails criticizing LGBT Christian groups and a nurse banned from wearing a crucifix for health and safety reasons, the commission found the employers’ restrictions were reasonable and lawful.

“In our assessment, these judgments are consistent with one another and appropriate given the facts,” the report said. “Courts have balanced appropriately the right to manifest a religion or belief with other factors…. What the cases show is that each situation is different, and the outcomes in individual cases are sensitive to the particular facts in each instance.”

The review of anti-discrimination policies follows a series of high-profile cases that led to concerns that Christians in particular have been unfairly penalized in British workplaces.

“It’s a relief to see the commission stand up for freedom of religion as a fundamental right and recognize that it should not be suppressed through fear of offending. However, the Commission is quite wrong to say that the current law does not need to be amended,” said Simon Calvert, spokesman for the Christian Institute. “We have long argued that equality law needs rebalancing so that courts have to take time to weigh up competing rights to see if both sides can be reasonably accommodated.”

Employers should consider all religious and belief-based requests seriously, and beyond what is required by law, try to accommodate unless they have objective reasons for refusal, according to the commission. For example, the report noted that a controversial decision by a theater chain to turn down Church of England ads including the Lord’s Prayer was lawful, but not in the spirit of free expression.

“Businesses should avoid taking decisions based on an overly broad view of what might cause offense, which could limit freedom of expression for religion or belief organizations,” it said.

The report reviewed policies for taking time off or opting out of duties for religious reasons, using the example of a Christian registrar in Britain who requested not to oversee same-sex civil partnerships, similar to Kentucky’s Kim Davis several years later.

The registrar and a counselor who declined to provide therapy for gay couples lost their case in European human rights court, due to employers’ “legitimate aim” to not discriminate against citizens or clients. “Opting out of work duties may be permissible where there is no actual or potential detrimental impact to other staff or to service users,” the report added.

The commission affirmed the rights of religious organizations and affiliated institutions to implement faith requirements or restrictions against LGBT individuals that reflect their core convictions. Such rights are not granted to commercial enterprises, such as a Christian bed and breakfast owner who turned down a same-sex couple.

“These cases raise the question of whether the exceptions should be widened so that commercial organizations that claim a religious ethos due to the owners’ religious beliefs can restrict employment or goods, services and facilities to reflect religious tenets,” the report said. “We consider that such an approach would be deeply flawed.”

One area the commission suggested the law could be improved was employment policies at religious schools. It urged the government to lessen restrictions around positions that do not require religious instruction or conviction. “The faith requirements applied to all teachers in (Catholic or Anglican schools), regardless of whether they are teaching religion, also seem to go beyond what is lawful in the EU Employment Equality Directive,” it stated.

The report described an atheist teacher who won his discrimination case after being unable to get promoted to a pastoral care position at a Catholic school: “The tribunal found that it was not essential for the position to be filled by a Roman Catholic, since only a few responsibilities of the job required knowledge of Catholic doctrine.”

While the equality commission does not see the need for additional “reasonable accommodation” protections for religious expression, another report released this week by British think tank ResPublica came to a different conclusion.

The group is lobbying to include reasonable accommodations—a legal provision that employers make adjustments to allow people to do their jobs effectively (typical applied to employees with disabilities)—added to a new British Bill of Rights to protect people of faith. ResPublica wrote:

Employers should no longer compel individuals to behave in ways that would contradict their sincerely held religious beliefs. We believe that the proposed Bill of Rights provides a unique opportunity to include a duty on employers and service providers to demonstrate reasonable accommodation towards those that wish to express their religious convictions in public.