Why Pope Francis and Patriarch Kirill Made Christian History in Cuba 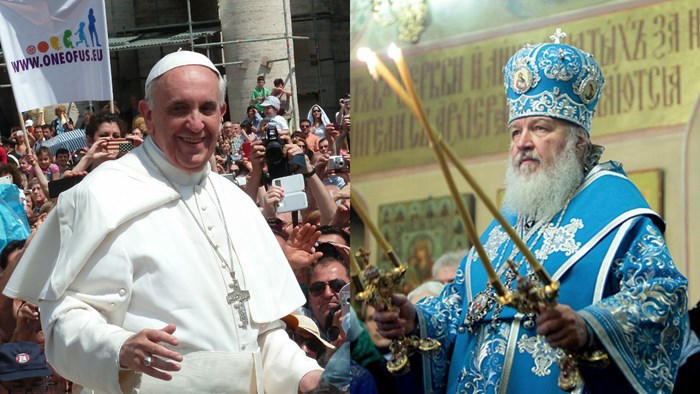 Gathering for the first time in nearly 1,000 years to jointly address the record levels of modern-day persecution of Christians, the leaders of Roman Catholicism and Russian Eastern Orthodoxy wrote:

In our determination to undertake all that is necessary to overcome the historical divergences we have inherited, we wish to combine our efforts to give witness to the Gospel of Christ and to the shared heritage of the Church of the first millennium, responding together to the challenges of the contemporary world. Orthodox and Catholics must learn to give unanimously witness in those spheres in which this is possible and necessary. Human civilization has entered into a period of epochal change. Our Christian conscience and our pastoral responsibility compel us not to remain passive in the face of challenges requiring a shared response.
...
We call upon the international community to act urgently in order to prevent the further expulsion of Christians from the Middle East. In raising our voice in defence of persecuted Christians, we wish to express our compassion for the suffering experienced by the faithful of other religious traditions who have also become victims of civil war, chaos and terrorist violence.
...
We bow before the martyrdom of those who, at the cost of their own lives, have given witness to the truth of the Gospel, preferring death to the denial of Christ. We believe that these martyrs of our times, who belong to various Churches but who are united by their shared suffering, are a pledge of the unity of Christians. It is to you who suffer for Christ’s sake that the word of the Apostle is directed: “Beloved … rejoice to the extent that you share in the sufferings of Christ, so that when his glory is revealed you may also rejoice exultantly” (1 Pet 4:12–13).

Here is their full declaration.

For the first time since the Christian church split into West and East in 1054 over issues of papal authority and the source of the Holy Spirit, a Roman Catholic pope and the heavyweight of the Eastern Orthodox Church will sit down together.

Pope Francis will meet with Russian Orthodox Church Patriarch Kirill for several hours tomorrow in a neutral location: Cuba's Havana airport. The two will end the meeting by signing a joint declaration, according to the official announcement.

The Russian church contains the majority of the world’s 260 million Orthodox Christians.

“This meeting of the primates of the Catholic Church and the Russian Orthodox Church, after a long preparation, will be the first in history and will mark an important stage in relations between the two churches,” the announcement said. “The Holy See and the Moscow Patriarchate hope that it will also be a sign of hope for all people of good will.”

While the two historic halves of the church disagree on many matters, such as the Russian handling of Christians in the Ukraine and Catholic attempts to evangelize Orthodox members, the violence against Christians in the Middle East was compelling enough to persuade Kirill to consent to a meeting that Francis has pursued.

“Although many problems in relations between the Russian Orthodox Church and the Roman Catholic Church remain unresolved, the protection of Christians in the Middle East against the genocide is a challenge that requires urgent united efforts,” said Vladimir Legoida, spokesman for the Russian Orthodox Church. “The exodus of Christians from the Middle East and North Africa [MENA] countries is a catastrophe for the whole world.”

Catholic and Orthodox Christians have a roughly equal presence in the MENA region, according to the Pew Research Center.

Francis’s ecumenism has previously included the Orthodox Ecumenical Patriarch Bartholomew of Constantinople, as well as multiple overtures to Protestants. To good effect: a LifeWay Research survey found nearly 2 in 5 American Protestant pastors (37%) said Francis had a positive impact on their opinion of the Catholic Church, while more than 3 in 5 said they saw the pope as their brother in Christ (63%).

The pope preached the “ecumenism of blood” at an evangelical seminary in the Central African Republic in December.

“God makes no distinctions between those who suffer,” he said. “I have often called this the ecumenism of blood. All our communities suffer indiscriminately as a result of injustice and the blind hatred unleashed by the devil.”

Recent studies show that Islamist extremism is the church’s greatest threat, with the number of Christian martyrs almost doubling from 4,344 in 2014 to more than 7,000 in 2015.

Preaching unity in the face of martyrdom is not a new a message for Francis. Last July, he cited the beheading of 21 Coptic Christians by Islamic extremists.

“When those who hate Jesus Christ kill a Christian, before killing him, they don’t ask, ‘Are you Lutheran, or Orthodox, or Evangelical or Baptist or Methodist?’” he said. “If the enemy unites us in death, who are we to divide ourselves in life?”

The Orthodox church has previously reached out to Protestants, and some evangelicals hoped Kirill’s rise to the patriarchy of the ascendant Russian church in 2009 might improve ecumenical relations. But since Russia’s annexation of Crimea, religious freedom in the region has been curtailed. More than 1,100 religious communities that were recognized under Ukrainian law are no longer allowed under Russian law, and authorities are threatening all religions outside the Russian Orthodox Church, the US State Department reported in October.

CT's past coverage of Eastern Orthodoxy includes how it lost two bridges to evangelicals in 2012, a 2011 interview with Metropolitan Hilarion on Orthodoxy offering evangelicals more than an olive branch, and whether the 21st century will be the Orthodox century.

Why Pope Francis and Patriarch Kirill Made Christian History in Cuba

Why Pope Francis and Patriarch Kirill Made ...