Author of 'A Promise Kept' left Columbia Bible College short of retirement to care for his ailing wife.
Sarah Eekhoff Zylstra|June 2, 2016 09:57 AM 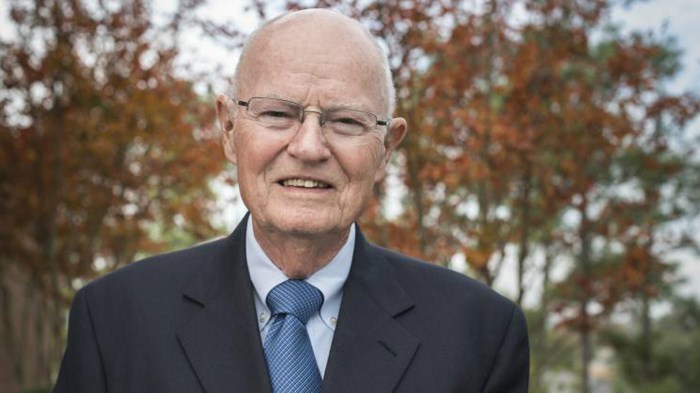 Robertson McQuilkin, who stepped down from the presidency of Columbia Bible College and Seminary (now Columbia International University) in 1990 to care fulltime for his ailing wife, Muriel, has died. He was 88.

McQuilkin, whose father was Columbia’s first president, met Muriel when they were both students there. During their 55-year marriage, they raised 6 children and served for 12 years as missionaries in Japan. Both eventually worked at Columbia—Muriel taught and McQuilkin became the president in 1968.

Under his leadership, Columbia’s enrollment doubled and two radio stations were founded, the school noted in its tribute to McQuilkin.

Their love story went national when Muriel developed Alzheimer’s disease and was eventually terrified to be without McQuilkin. Some of his friends advised him to put her into an institution. But he chose instead to leave Columbia eight years short of retirement in order to care for her.

McQuilkin explained his decision to CT:

When the time came, the decision was firm. It took no great calculation. It was a matter of integrity. Had I not promised, 42 years before, "in sickness and in health . . . till death do us part"?

This was no grim duty to which I stoically resigned, however. It was only fair. She had, after all, cared for me for almost four decades with marvelous devotion; now it was my turn. And such a partner she was! If I took care of her for 40 years, I would never be out of her debt.

His resignation speech to Columbia “has been heard by tens of thousands of people around the world,” the school stated.

The disease “did not seem painful for her,” McQuilkin said, “but it was a slow dying for me to watch the vibrant, creative, articulate person I knew and loved gradually dimming out.”

McQuilkin later wrote for CT about how he found joy after life’s blows—“my dearest slipping from me, my eldest son snatched away in a tragic accident, my life's work abandoned at its peak.”

Muriel passed away in 2003. “I don’t see how I could have any more grief,” McQuilkin told CT then.

He continued to speak and write, in addition to serving as president emeritus of Columbia. He authored 19 books, including A Promise Kept, about the struggles he had and lessons he learned in caring for Muriel. In 2005, he married nursing professor Deborah Jones.

In 2010, McQuilkin received the Lifetime Service Award from Missio Nexus.

The next year, after Pat Robertson said it was okay to divorce a spouse with Alzheimer’s, CT blogger Ed Stetzer said McQuilkin’s example was better.

McQuilkin wrote for CT about caring for his wife, as well as the best way to do missions and how to break the cycle of missions dependency.