The denomination took a year to get its apology just right.
Sarah Eekhoff Zylstra|June 24, 2016 09:40 AM 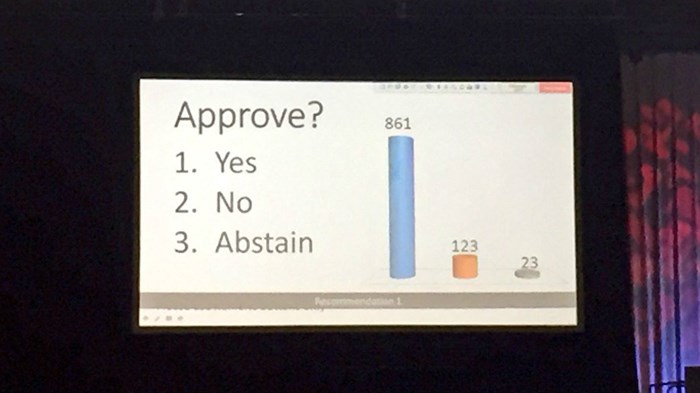 The Presbyterian Church in America (PCA) overwhelmingly voted last night to repent for its racist actions during the civil rights era, even though the denomination wasn’t founded until nine years after the 1964 Civil Rights Act.

But “during the civil rights period, there were founding denominational leaders and churches who not only failed to pursue racial reconciliation but also actively worked against it,” read the one-page overture, which passed 861 to 123.

Those churches segregated worshipers by race, barred blacks from membership and black churches from joining presbyteries, participated in and defended white supremacist organizations, and taught that the Bible sanctioned segregation and opposed inter-racial marriage, the overture said.

The PCA also confessed to failing to “lovingly confront our brothers and sisters concerning racial sins and personal bigotry.”

“I'm overjoyed & overwhelmed to be present at this historic moment in racial reconciliation at #PCAGA,” tweeted K. A. Ellis, ambassador for International Christian Response.

Fourteen years ago, the PCA confessed their “covenental involvement” in the “heinous sins” the United States committed, but didn’t take responsibility for specific denominational offenses.

The PCA considered a specific apology when the issue was first raised at its annual meeting last year, but decided after nine hours of debate to defer it in order to perfect the language, allow for specific examples for repentance, and give churches time to study the PCA’s complicity. The goal: a more “heartfelt and accurate” repentance. (CT covered the pros and cons of that decision.)

Corporate repentance takes more time than individual repentance, PCA pastor Lane Keister told CT at the time. “You can’t get an entire denomination to fully repent on a dime.”

Another advantage: keeping the focus on racism for an entire year, Wy Plummer, who coordinates the PCA’s African American ministries, told CT then. If the resolution would have passed right away last year, “we would have gone to sleep again” on issues of race, he said.

The PCA stayed awake: This year, more than two-thirds of the 63 PCA overtures called for the denomination’s repentance.

The committee shaped a final overture to send to the floor, including recommending a pastoral letter “as an example of how a presbytery might provide shepherding leadership for its churches toward racial reconciliation” and pointing out sections in the Book of Church Order that lay out how to deal with those who have sinned in matters of race.

“Thank you to our brothers and sisters at #PCAGA for standing up for racial unity and repentance,” tweeted Russell Moore, president of the Southern Baptist Convention’s (SBC) Ethics and Religious Liberty Committee. Last week, the SBC repudiated the Confederate flag.

Earlier this month, the Associate Reformed Presbyterian Church Synod also confessed to “the sinful failings of our church in the past in regard to slavery and racism” and released a lengthy report on the denomination’s history of race relations and how it can do better.