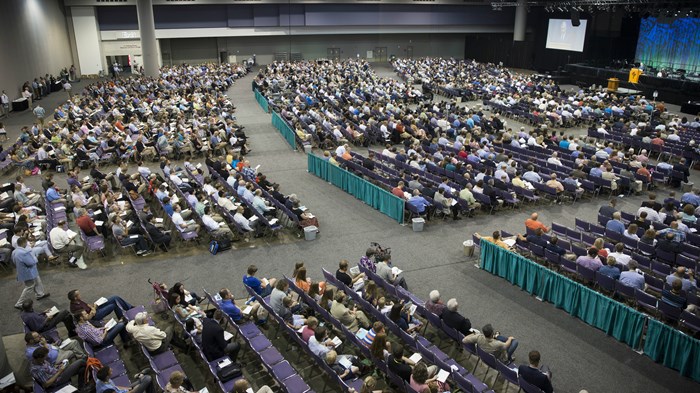 Last week, the PCA General Assembly voted to form a committee to take up the issue again. The seven-person committee will look at the biblical basis and theology of ordination and of the office of deacon, then report back to the General Assembly any changes to consider.

In the meantime, PCA churches are encouraged to promote the participation of women “in appropriate ministries.” The denomination currently does not appoint female members as elders or deacons.

Joseph Pipa, president of Greenville Presbyterian Theological Seminary, lodged a protest against the committee, according to the PCA’s online magazine byFaith.

“What is being overlooked…in this recommendation is that the ‘biblical basis, theology, history, nature, and authority of ordination,’ ‘the biblical nature and function of the office of deacon,’ and ‘the ordination or commissioning of deacons/deaconesses’ have already been studied, explored and settled,” they wrote. “Not only has this been expressed in past General Assemblies, but the PCA’s Constitution is already clear on what the PCA believes Scripture teaches on these issues.”

Contention over the PCA’s stance against female ordination isn’t new. In 2009, the general assembly narrowly voted (446–427) against creating a committee to study women’s roles. Even before that, the denomination argued over whether commissioning “deaconesses” to help male deacons is tantamount to ordaining them. (Tim Keller argued for commissioning, and not ordaining, deaconesses.)

In 2011, the general assembly clarified that “these assistants to the deacons are not officers of the church and, as such, are not subjects for ordination.” Since then, arguments on the issue have quieted down.

Part of the renewed attention this year may stem from the PCA’s steady growth (albeit slower than at first). Over the last five years, the denomination has added 68 churches, 374 ministers, and almost 19,000 members. The PCA now has 370,000 members.

Some of those churches and members come from the country’s biggest Presbyterian group, the Presbyterian Church (USA), or PCUSA. As today’s version of the original Presbyterian denomination the PCA split from, the PCUSA continues to ordain women and has extended church offices to non-celibate gay and lesbian clergy.

The 1.5 million-member PCUSA, which also met last week, continues to shrink, losing 187 congregations and more than 95,000 members last year. Some of its decline over the past few years stems from the ordination issue. Conservative Presbyterians have left for the PCA or more recently formed spinoffs, like ECO: A Covenant Order of Evangelical Presbyterians, which ordains women, but not gay clergy in relationships.

Despite falling membership, giving to local missions was up by almost $7.7 million—a trend that echoed recent reports from the Southern Baptist Convention.

The PCUSA voted to create two committees to look into big-picture changes. The first will “develop a guiding statement for the denomination and make a plan for its implementation,” while the second will look into more immediate “national structural changes” that could “carry the Presbyterian church (USA) through the next part of the 21st century.”

Some of those changes are urgent, especially for the Presbyterian Mission Agency (PMA). An agency review found that it had “an unclear sense of identity and purpose,” “lacks a theological foundation,” and “is driven in decision-making by resources rather than vision and strategy.”

The PCUSA also voted to add the Belhar Confession to its Book of Confessions. By a vote of 540–33, the denomination approved the 50-year-old confession, which was written in South Africa by the Dutch Reformed Mission Church during apartheid. The Belhar, which focuses strongly on unity, has been a point of contention for the Reformed denominations. (The Reformed Church in America lists it as a “standard of unity,” the Christian Reformed Church of North America uses it as an “ecumenical faith declaration,” and the PCA does not officially recognize it.)