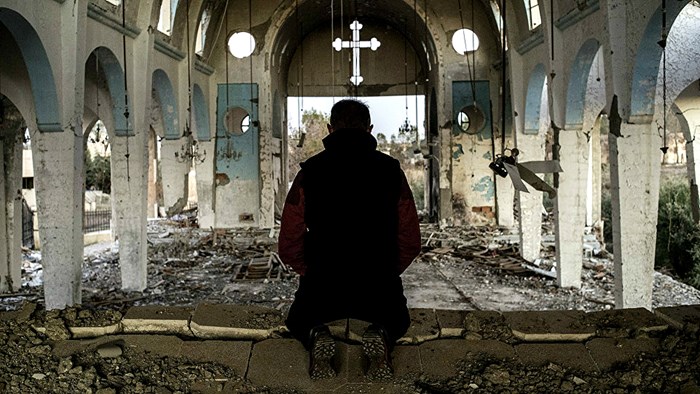 Image: Valery Melnikov / Sputnik
A local Christian prays in the ruins of a church destroyed by ISIS in Syria's Hasakah province.

Update (Mar. 17): Secretary of State John Kerry has declared that ISIS is committing genocide against Christians and other religious and ethnic minorities in the Middle East.

Speaking from the State Department on Thursday morning, the day of the deadline for his decision, Kerry said:

My purpose in appearing before you to today is to assert that, in my judgment, Daesh [ISIS] is responsible for genocide against groups in areas under its control, including Yazidis, Christians, and Shia Muslims.

[ISIS] is genocidal by self-proclamation, by ideology, and by actions—in what it says, what it believes, and what it does. Daesh is also responsible for crimes against humanity and ethnic cleansing directed at these same groups, and in some cases also against Sunni Muslims, Kurds, and other minorities.

He cited the examples of ISIS killing Christians in Mosul and Qaraqosh “solely because of their faith,” as well as forcing Christian and Yazidi women into sexual slavery.