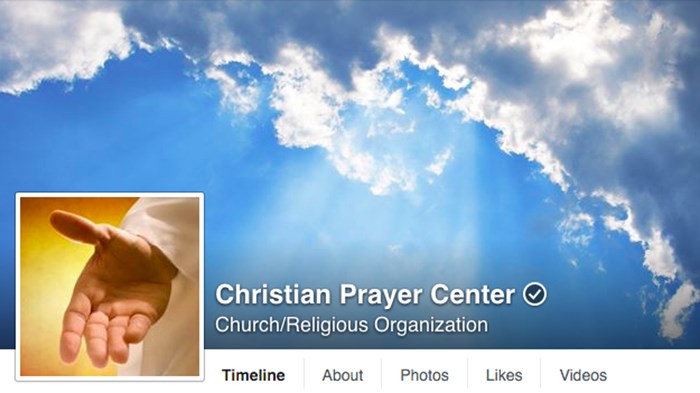 For four years, anyone with a prayer request could pay the Christian Prayer Center (CPC)—a website with nearly 1.3 million Facebook fans—between $9 and $35 to intercede for them.

Visitors to the site (as well as its Spanish-language sister site, Oracion Cristiana) saw testimonials from religious leaders and laypeople who claimed that God gave them healthy babies, winning lottery tickets, money for mortgage payments, and clean HIV tests and cancer scans after they paid for prayer, according to the Washington State attorney general’s office.

The trouble was, the popular site—which eclipsed even the International House of Prayer in its Facebook following—was a fraud. A counter-Facebook page, the Christian Prayer Center Scam, went up in 2012.

The testimonials were fake. The photos of happy customers were stock footage. And “Pastor John Carlson,” who sent weekly emails and had a LinkedIn page, was made up. Correspondence was signed by the non-existent “Pastor Eric Johnston.”

Customers will be getting their money back in full, attorney general Bob Ferguson announced on Thursday, if they apply for a refund by June 12.

“I believe in the power of prayer,” he stated. “What I do not believe in and what I will not tolerate is unlawful businesses that prey upon people—taking advantage of their faith or their need for help—in order to make a quick buck.”

Rogovy was multiplying his “quick bucks.” After customers signed up for prayer, they were directed to a confusing page where they had to opt out of a monthly payment plan for “continued blessings,” the attorney general’s office stated. “The information was presented in a confusing manner and inadequately disclosed that the charges would reoccur until the consumer canceled.”

The website also offered the services of “one of our pastors” to help “with any religious ceremonies,” which “gave the impression CPC had multiple pastors who regularly consulted on religious issues,” the attorney general’s office stated. “In fact, it had none. Rather, the websites were a for-profit corporation with multiple employees and independent contractors.”

Rogovy’s other scam, the online Christian National Church, was also a for-profit organization, the attorney general’s office stated. The church was run by the fake “Pastor Parker Robinson,” and still offers an ordination certificate for $139 to those who believe in one true God, accept Jesus as their Savior, and have asked forgiveness for their sins.

“In an era where weekly physical church attendance is difficult to maintain, our goal is to embrace technological advancements in order to provide prayer to a global audience,” reads the Christian National Church description on the Better Business Bureau website. “We offer an option to those who are looking for prayer support without the commitment or cost of becoming a member of a land-based church.”

In a third business, the Consumer Complaint Agency, Rogovy promised customers he would advocate on their behalf, but instead charged them $25 to forward their complaints against businesses.

Rogovy violated the Consumer Protection Act, which prevents businesses from engaging in fraud, and the Charitable Solicitations Act, which forbids churches and charities from making false claims when soliciting funds, the attorney general’s office stated.

“The Christian Prayer Center is now closed,” the CPC website now reads. “We thank you for all the prayers, and we cherish the opportunity to have created a place where Christians could meet to support each other.”

By April 8, customers who purchased prayers from CPC or Oracion Cristiana between July 1, 2011, and June 30, 2015, will receive an email from CPC alerting them to to file a complaint to receive a refund. To be eligible, they must file by June 12. The attorney general’s office has more details.