Pew examines which parents successfully pass their religion to their kids—and whether mom or dad mattered most.
Sarah Eekhoff Zylstra|October 26, 2016 08:16 AM 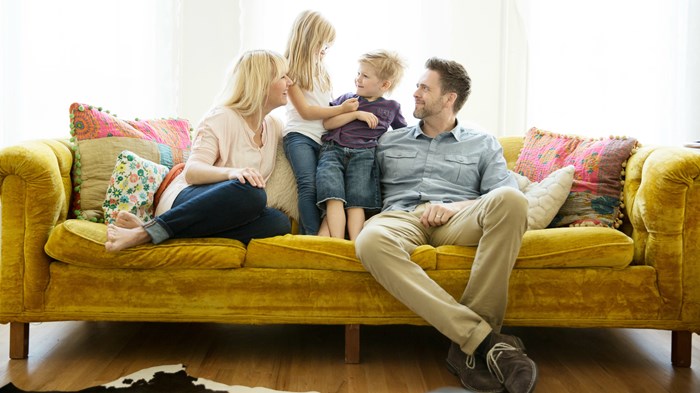 American Protestants are keeping their children in the faith at a higher rate than Catholics or the unaffiliated, according to the latest study from the Pew Research Center.

Four out of five children raised by two Protestant parents remained Protestant into adulthood. For those raised in Protestant homes where religion was very important or often discussed, the retention rate jumps even higher (85% and 89%, respectively).

Those raised by two Catholic or unaffiliated parents, on the other hand, were equally less likely (62%) to remain in their parents’ religion—or lack thereof.

Protestantism is also gaining a larger percentage of adherents from Catholicism and the ranks of the unaffiliated than it is losing to both groups. (However, given US Protestantism’s larger base—about 45 percent of American adults—losing a smaller percent still means losing a larger number of members.)

Among Americans with an exclusively Catholic background, 16 percent are now Protestant. Meanwhile, just 3 percent of those raised in an exclusively Protestant home have switched to Catholicism.

And while about 14 percent of Americans raised by Protestant parents are now unaffiliated, that’s only half the number of people raised by unaffiliated parents who are now Protestants (28%).

Those raised in a home with one Protestant and one unaffiliated parent are more likely to grow up to identify as Protestant (56%) than unaffiliated (34%). However, only a quarter have stuck with their Protestant parent’s particular denomination. 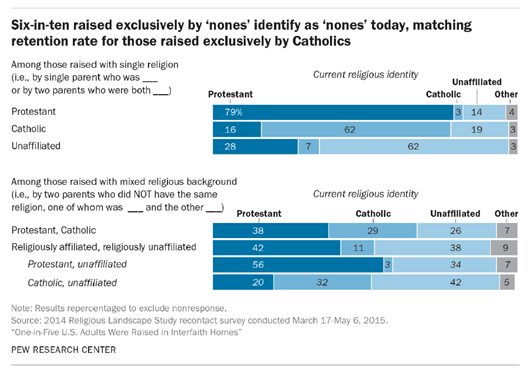 The people most responsible for these trends: mothers.

The higher level of religious commitment among women than men has been well documented; in Pew’s study, 83 percent of those with affiliated/unaffiliated parents reported that their mother was the religious one. And both men (30%) and women (33%) told Pew that the wife was more religious than her husband. (About 60% said the spouses were equally religious.)

In mixed-religion couples, the mother’s influence is even greater. In every combination (one Protestant and one Catholic parent; one Catholic and one unaffiliated parent; one Protestant and one unaffiliated parent), far more respondents said their mother took responsibility for their religious upbringing (56% altogether) than did their father (6%); even more pointed to their mother’s influence than a shared influence (31%). 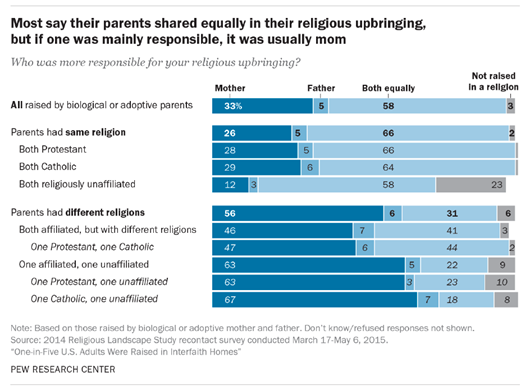 So it follows that the faith of the children most often mirrors their mother’s religion.

Those mixed-faith outcomes are becoming more important. One in five Americans reports being raised in a mixed-religion home (21%), and it’s clearly a growing trend. Of those born before 1946, 87 percent were raised in a single religious background. Among millennials, less than three-quarters say the same (73%).

The Protestant drop looks even bigger: More than half of the Greatest Generation was raised solely Protestant (55%), while the number of millennials raised only Protestant is just 32 percent.

Protestant couples make up 41 percent of married adults; while a mixed-religion marriage with one Protestant makes up another 14 percent. Those numbers aren’t that much different than the way Americans overall report being raised: 40 percent of those raised by married parents said their household was Protestant-only, while another 15 percent had one Protestant parent.

Single-religion couples are more likely than other couples to attend worship, pray often, believe in God, and say that religion is very important to them (77%). They’re also more likely to talk about religion a lot (36%). 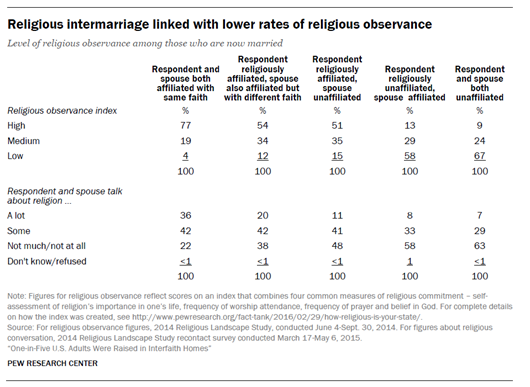 Not surprisingly, couples who share a faith value that trait in each other. Among the highly religious, shared religious beliefs (64%) ranks only behind shared interests (69%) as something they find important for a successful marriage. Good sex (63%), sharing household chores (60%), and having children (50%) follow. Sharing religious beliefs was less important for those with medium (25%) and low (12%) religious observance. 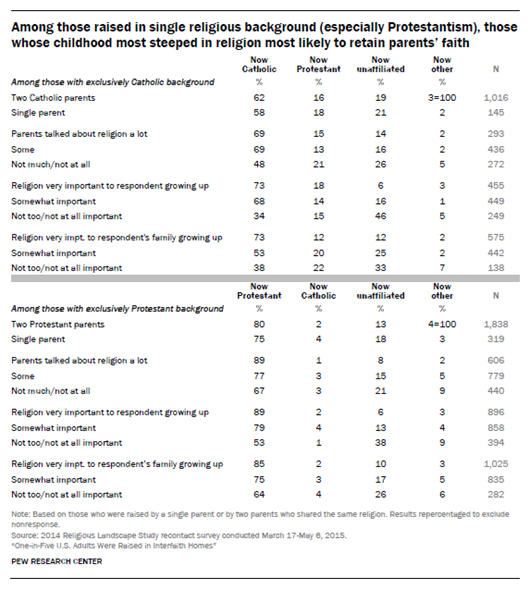 Those single-religion couples are also much more likely to participate in religious activities with their minor children.

“For example, more than three-quarters of parents married to spouses of the same faith say they pray or read scripture with their children (77%), and 7 in 10 say they send their children to religious education programs, such as Sunday school (70%),” Pew stated. “Those in religiously mixed marriages are much less likely to do these things.”

More than four out of five same-religion couples take their children to church with them (83%).

In mixed-religion marriages, the amount of religious participation on the part of the children is harder to discern.

“One pattern regarding the passing on of religious identity from one generation to the next is clear,” Pew stated. “Among those who were raised in a single religious background (especially within Protestantism), the family’s religious commitment is closely linked with retaining one’s religion into adulthood.” 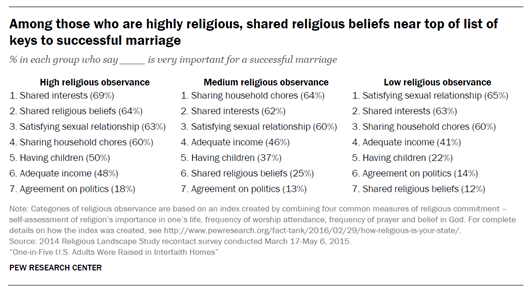