What Americans Think of What Evangelicals Think of Religious Liberty

How both sides of the debates over same-sex marriage, transgender bathroom access, and employer-provided contraception feel about each other.
Sarah Eekhoff Zylstra|September 29, 2016 02:00 PM 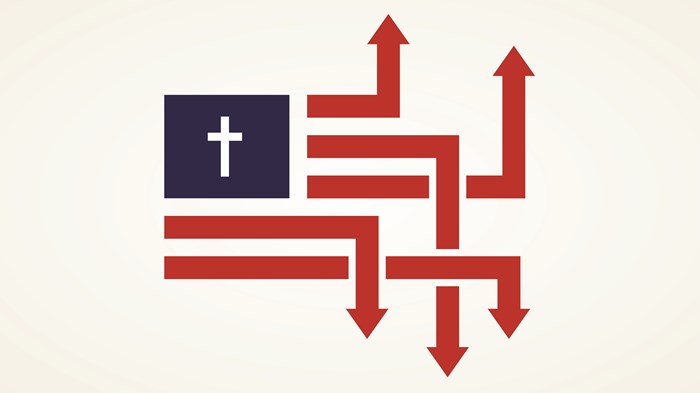 On two of three contentious issues at the intersection of religious liberty and nondiscrimination concerns, Americans remain evenly divided.

Though most Americans believe employers should be required to supply birth control in their health insurance plans, they are split down the middle on whether businesses should be required to provide wedding services for same-sex couples, as well as on whether transgender people should be allowed to use the restroom of their choice, says a study released this week by the Pew Research Center. 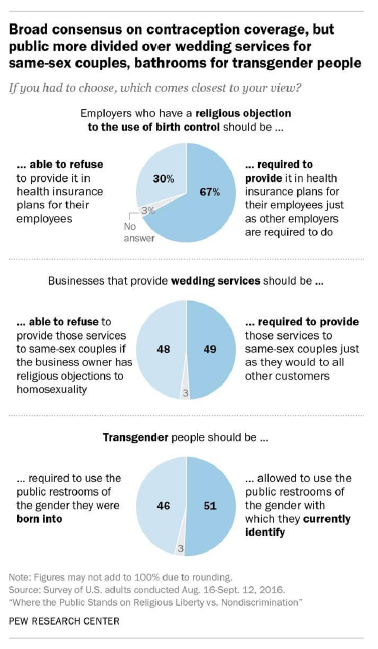 As expected, most evangelicals take a strong stance against making businesses provide wedding services to same-sex couples or allowing transgender people to use the bathroom of their choice. They’re more comfortable with requiring employers to offer birth control to employees.

Pew also asked whether Americans sympathized with one side or the other—or both—in each debate.

In order to facilitate that, researchers asked the questions in an unusual way.

Instead of the normal phone survey, Pew asked respondents to read the questions. The purpose was both to make people feel more comfortable answering sensitive questions and to allow them see all of the options when weighing where their sympathies lie, senior researcher Jessica Martinez told CT. The survey was mostly done by email (more than 4,000 respondents), with a few (343) answers coming in by snail mail.

While most people are firmly in one camp or the other, roughly 3 to 4 out of 10 Americans either sympathized with both sides—or with neither—on issues of whether employers should be required to provide birth control (43%), transgender people should be able to use the bathroom of their choice (37%), or businesses should be required to serve same-sex couples (33%). 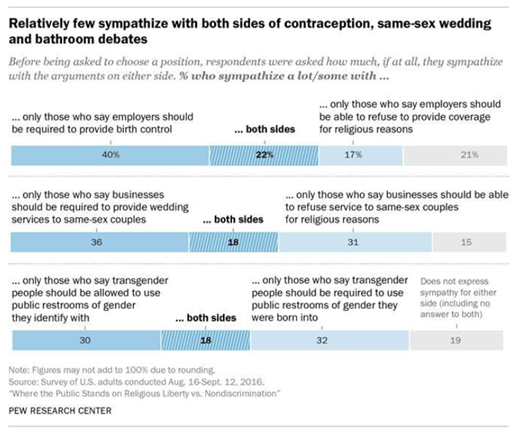 White evangelicals expressed the strongest feelings about same-sex weddings. More than three quarters said that businesses that provide wedding services should be able to refuse service to same-sex couples (77%).

The opinion becomes stronger among white evangelicals who attend church weekly, 88 percent of whom said employers should be able to refuse services.

Black Protestants—two-thirds of whom identified as born-again or evangelical Christians—are more evenly divided, regardless of how often they attend church. About half of all black Protestants (48%) and weekly churchgoers (49%) said businesses should be able to refuse services to same-sex couples. 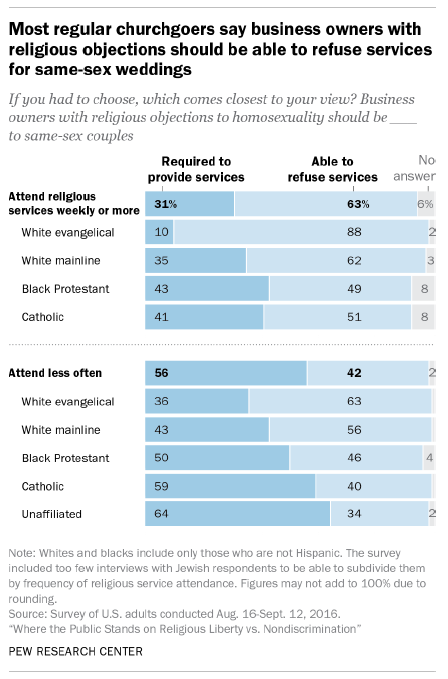 White evangelicals were slightly less firm on whether transgender people should be required to use the public restroom of their birth gender (69%), though again, the opinion was stronger among weekly church attendees (76%).

Roughly half of black Protestants believe transgender people should be allowed to use the restroom they choose (47%); the number dips among those who attend church weekly (36%). 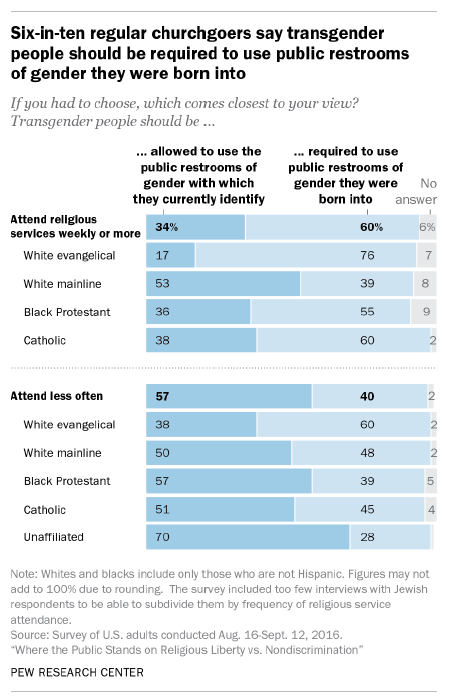 White evangelicals are the most ambivalent on whether employers with a religious objection should be allowed to skip providing contraception coverage for employees (53%); weekly churchgoers felt a little more strongly (62%). 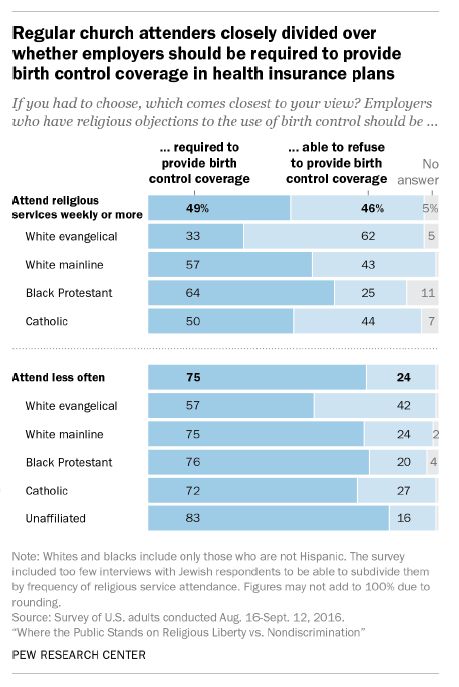 The study also found that white evangelicals who attend church overwhelmingly say that abortion (89%) and homosexual behavior (86%) are morally wrong. Only five percent say that contraception is wrong. (Black Protestants weren’t broken out for those questions.)

Almost 9 out of 10 Americans know someone who is gay or lesbian (87%), and those people are more likely to say homosexuality is morally acceptable (19%) than those who don’t have a homosexual friend or family member (3%).

What Americans Think of What Evangelicals Think of Religious Liberty

What Americans Think of What Evangelicals Think of ...