In the next 30 minutes, a quarter of practicing Christian women who use social media will check their accounts (26%). Within the next two hours, another quarter will check in (29%).

That’s according to an August survey by Barna Group and Proverbs 31 of 455 American women. Barna defines practicing Christian women as those who self-identify as Christian, attend church at least once a month, and say their faith is very important in their lives.

Most of those women—like a quarter of the world’s population—are on Facebook. The company has 1.7 billion active monthly users, including four out of five practicing Christian women in America.

Like all American women, Christian women use the sites quite a bit. In a typical week, half of those who use social media check it first thing in the morning (49% of practicing Christian women vs. 50% of all women), and another half check right before bed (47% vs. 46%).

A quarter of Christian women get immediate alerts on their phones when someone interacts with them on social media (26% vs. 25%). And they are significantly more likely (16%) than the average American woman (9%) to feel anxious if they haven’t checked social media in a while. 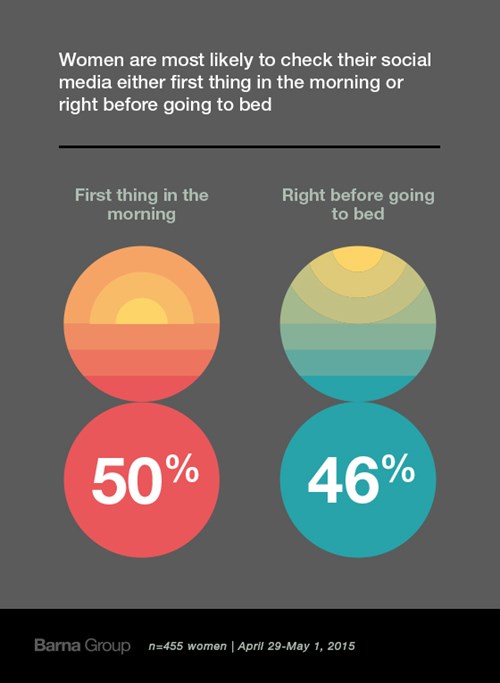 Once they’re logged in, Christian women tend to linger. About a third typically spend half an hour or more on each visit to Facebook (35%); another quarter are there from 10 to 19 minutes (27%). Both of those numbers are close to the average.

The only site Christian women spend more time on than Facebook is Snapchat. Though only 9 percent of Christian women report using Snapchat, they tend to use it a lot or hardly at all. Nearly 4 out of 10 are usually there for 30 minutes or more (37%) each time, while close to 3 out of 10 are on for less than 5 minutes at a time (27%). 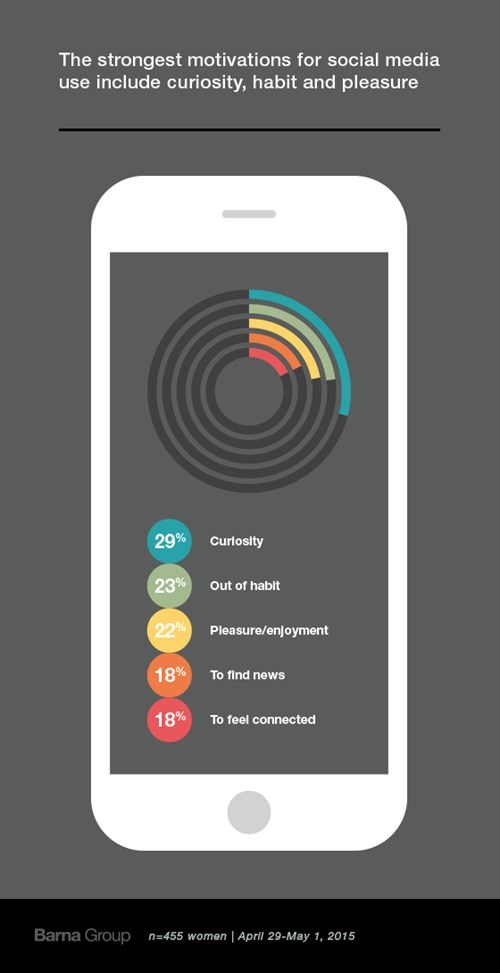 About a quarter said social media didn’t affect them for good or ill (23%, compared to 30% of American women).

The positive response comes from feeling connected to friends, which about 9 out of 10 Christian women sometimes or usually feel after a social media encounter (89%), more than the average American woman (81%).

In fact, half of Christian women say that staying in touch (53%) and connecting with friends (45%) are some of the greatest benefits to social media. One in five said they liked being able to share their lives with others (21%).

Using social media sometimes or usually encourages three quarters of practicing Christian women (72% vs. 59% of average women), and it energizes more than half (54% vs. 43%). Though social media is often accused of fostering envy, most women report that they don’t normally feel jealous of other people’s lives after spending time there (86% Christian, 84% average).

Spending time on social media makes 35 percent of Christian women—and all women—want to change something about their lives. 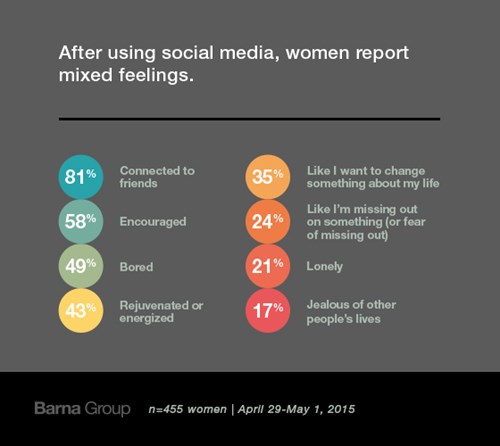 The biggest problems with social media are that it can be a waste of time (31%) or distraction from things that need to get done (22%), Christian women said. Others reported the temptation to judge other people (17%), covet the things other people have (10%), or get into arguments (10%).

However, more than a third of Christian women reported feeling no ill effects from social media (36%), more than the average woman (29%).

One of the best parts of social media—aside from connecting with others—is being exposed to new things, Christian women said. A quarter said liked finding inspiration and ideas (26%) or learning new things (24%).

More Christian women than the general population said that one of the best things about being on social media was the spiritual encouragement (20% vs. 7%), while fewer said they liked using it to stay current on news (12% vs. 19%) or read shared articles (11% vs. 18%). 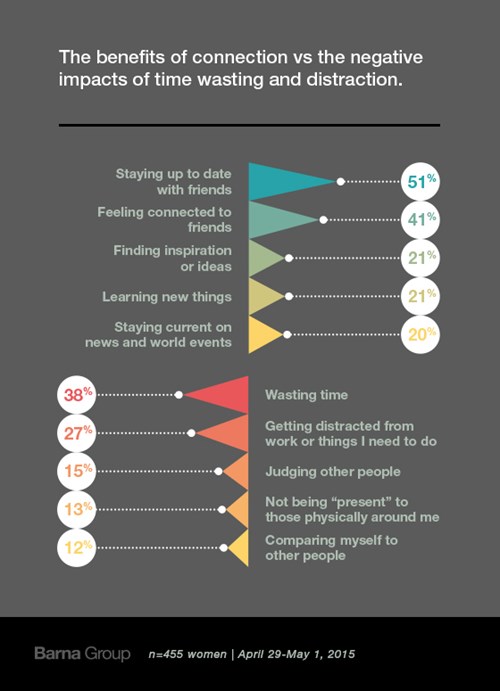