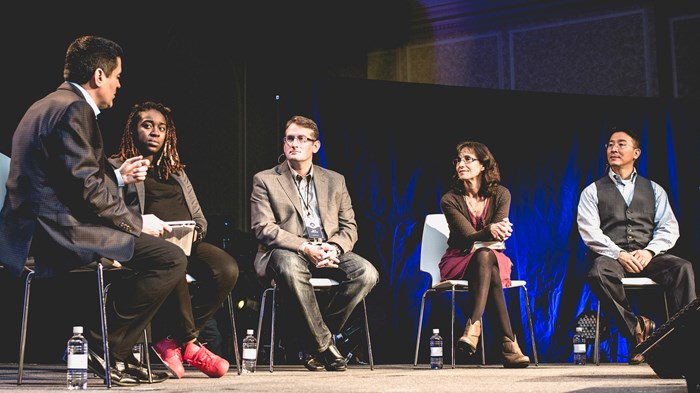 On Tuesday, the Council on Biblical Manhood and Womanhood (CBMW) released a new declaration that reasserts the significance of biological sex and traditional marriage over society’s growing LGBT acceptance.

“We are persuaded that faithfulness in our generation means declaring once again the true story of the world and of our place in it—particularly as male and female,” according to the group’s Nashville Statement.

At the Southern Baptist Convention’s Ethics and Religious Liberty Commission (ERLC) national conference in Nashville last week, it was endorsed by about 150 conservative Christian leaders—many of them male, Baptist, and Reformed. (The mayor of Nashville, though, was not happy about the name.)

At its founding by theologian Wayne Grudem 30 years ago, CBMW issued the Danvers Statement, which affirmed the complementary differences between the genders. It came in response to an increasingly feminist society (and church), where conservative leaders feared men and women were losing their biblical distinctions.

That foundational document, often seen as the textbook definition of complementarian convictions, critiques “feminist egalitarianism” and women rising in church leadership, and upholds “vocational homemaking” and wives’ submission in marriage.

The 2017 Nashville Statement, instead of outlining how the genders should live in relation to one another, makes several points defending the existence of two genders in the first place. CBMW upholds “God’s design for self-conception as male or female” in the face of new conversations over transgender identity, gender fluidity, and homosexual relationships.

“There is no effort to equivocate for the sake of wider, but muddled, acceptance,” he said. “It touches the most fundamental and urgent questions of the hour, without presuming to be a blueprint for political action.”

The new statement affirms that people with same-sex attraction can have “a rich and fruitful life pleasing to God through faith in Jesus Christ, as they, like all Christians, walk in purity of life.” But in another point, it critiques those who would self-identify as gay.

Christians who affirm same-sex relationships have pushed back against the statement—particularly a line that says approving of homosexuality and transgenderism “constitutes an essential departure from Christian faithfulness and witness.” (In the words of Baptist Press, no more “agreeing to disagree” on LGBT issues.) The Liturgists, founded by musician Michael Gungor and podcaster “Science Mike” McHargue, released a counter-statement in solidarity with LGBT Christians.

The Nashvile Statement also suggests that people who identify as transgender can and should accept the “God-ordained link between one’s biological sex and one’s self-conception as male or female,” while acknowledging the dignity of those who are born with physical conditions related to their sex.

It’s hard to capture the complexities of transgenderism in a concise declaration, but CBMW has approached the issue from a theological, biblical standpoint, relying on what researcher Mark Yarhouse calls an “integrity lens,” or concern for the integrity of sex and gender as created by God.

“It makes sense that faithful Christians would start there,” said Yarhouse, author of Understanding Gender Dysphoria: Navigating Transgender Issues in a Changing Culture and director of the Institute for the Study of Sexual Identity at Regent University. “It’s trying to signal what’s going to be within the bounds of evangelicalism, and it will be interesting to see how evangelicals respond to that.” (For more on his research, see Yarhouse’s 2015 CT feature, Understanding the Transgender Phenomenon.)

Some conservative Christians criticized the CBMW’s narrow focus on homosexuality and transgenderism, rather than the underlying gospel issues that have led to a distorted view of “bodily and sexual life” among Christians.

“The spectacles and obvious disputes this statement responds to are the sideshow, not the main action,” wrote Matthew Lee Anderson, in a Mere Orthodoxy post about why his name would not appear among the signatories. “Those obvious manifestations of the ‘spirit of our age’ are not the ones we should worry about; it is those that are not obvious, the subtle temptations that lure us in without us realizing their deadly force.”

The Nashville Statement, with its clear stances on such topics, explicitly expands the CBMW’s central concerns beyond what it had long been known for addressing: women’s roles in the home and the church.

“They seem to have won the battle on women’s ordination, at least in the Southern Baptist and Presbyterian church,” said Wendy Alsup, who was among the female complementarian bloggers who spoke out against CBMW’s theological emphases during last summer’s Trinity debate. “This may be a new iteration of CBMW, but I don’t think it will define them” in the same way as the Danvers Statement did, she said.

Though she had significant concerns about some points in the new declaration, Alsup, author of the new book Is the Bible Good For Women?, said that overall, “This is not a knee-jerk reaction to liberal ideas; this is a thoughtful and biblical statement.”

Aimee Byrd, who raised the issue of the Eternal Subordination of the Son as it relates to complementrian theology, took issue with what the Nashville Statement left out. Not only did it not clarify that particular debate, she wrote, but it doesn’t address her questions on authority and submission; feminine and masculine stereotypes; and the relationships between men and women outside of marriage.

The new statement comes about a year after Denny Burk, a professor at Boyce College, replaced Owen Strachan as CBMW president.

“The spirit of our age does not delight in God’s good design of male and female. Consequently, confusion reigns over some of the most basic questions of our humanity,” said Burk. “The aim of the Nashville Statement is to shine a light into the darkness—to declare the goodness of God’s design in our sexuality and in creating us as male and female.”