Democrats Willing to Fund Pro-Life Candidates to Win Back Congress

Question is how many single-issue voters are really up for grabs.
Kate Shellnutt|August 1, 2017 12:51 PM 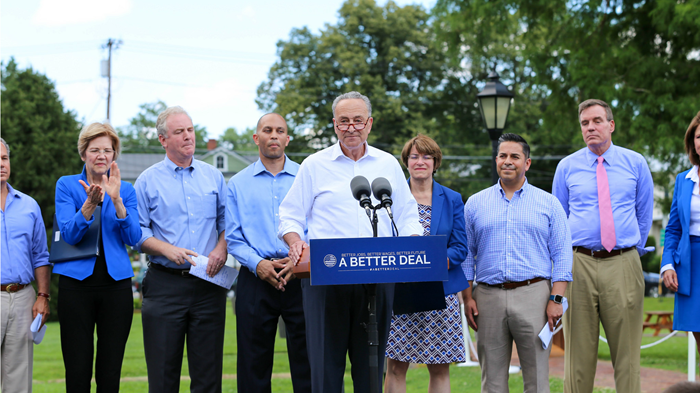 After years of party polarization over abortion, Democrats may finally be taking steps toward welcoming more pro-life Christians into their ranks.

Representative Ben Ray Luján, chair of the Democratic Congressional Campaign Committee (DCCC), said yesterday that the party has “no litmus test” on abortion and won’t withhold financial backing from pro-life candidates in the 2018 mid-term elections, The Hill reported.

His remarks came a week after the party released a new set of policy plans and goals that push economic concerns and don’t mention abortion at all.

As Luján looks to a “broad coalition” to shift control of the US House of Representatives away from the Republican Party, core supporters within his own party are questioning the move away from a firm pro-choice stance.

Will the potential of luring voters who have avoided the party over the issue of abortion be worth the backlash from the Democratic base, including outspoken abortion-rights advocates?

Michael Wear, a former White House faith advisor under President Barack Obama, wants his party to at least try. He suggests that this opportunity depends on how pro-life evangelicals and Catholics respond to the idea. Wear tweeted on Monday:

If you are a Republican or Independent who says, “Gosh I could consider Democrats if only they were more open to pro-lifers,” speak up.

Hundreds of followers retweeted and responded to his messages; some eager to see a place for themselves, and some skeptical that it could happen among a party whose official platform still supports abortion.

Several prominent Democrats, though pro-choice themselves, have defended having pro-lifers in their party—including the highest-ranking representatives in Congress, House Minority Leader Nancy Pelosi and Senate Minority Leader Charles Schumer. Both have referenced being a “big tent” party and not excluding diverging views on abortion.

When former presidential candidate Bernie Sanders, an Independent, backed a pro-life Catholic candidate for mayor of Omaha earlier this year, he told critics, “You just can't exclude people who disagree with us on one issue.”

The situation spurred a debate among progressives, with Democratic National Committee (DNC) chair Thomas Perez commenting, “Every Democrat, like every American, should support a woman's right to make her own choices about her body and her health. That is not negotiable.”

According to the Pew Research Center, 3 in 4 Americans support at least some restrictions on abortion, and Republicans are three times as likely (65%) as Democrats (22%) to believe abortion should be illegal in all or most circumstances.

But abortion views tend to be nuanced, as surveys show. While half of Americans consider abortion morally wrong, just 20 percent think it should be totally illegal, according to Gallup. That means that a significant portion of country—including 41 percent of conservatives—oppose abortion on moral grounds but favor it being legal.

White evangelicals are most likely to view abortion as morally wrong, and many evangelicals who voted for President Donald Trump in the 2016 election cited the GOP’s pro-life position as well as the likelihood of Trump appointing a pro-life Supreme Court justice.

Abortion can be a dealbreaker for American voters, with 1 in 5 saying that they will only vote for a politician who shares their views.

Pro-life Democrats were in a particularly tough spot during last year’s election, when Hillary Clinton pushed back against the Hyde Amendment, which prevents the federal government from directly funding abortions.

The leaders of Democrats for Life saw the shift as a sign that “the party that is supposedly on the side of justice for the vulnerable no longer welcomes those of us who #ChooseBoth; that is, those of us who want the government to protect and support prenatal children and their mothers.”

Currently, not a single Democrat in Congress has a perfect rating on the National Right to Life Committee’s scorecard (and only a handful voted in line with recent pro-life legislation at all). A decade ago, there were 17 Democratic representatives with a 100-percent pro-life rating. CT has reported how the fight over the Obama administration’s health care reform contributed to the death of pro-life Democrats.

Polls released by the Susan B. Anthony List, a pro-life lobby, indicate that pro-lifers will be a politically advantageous group in the upcoming election.

According to Wear, Democrats’ current openness could lead them to find common ground with pro-life moderates over support for the Hyde Amendment. While voters set on reversing Roe v. Wade will likely stick with Republicans, “this is about the Dem party being reasonable enough to win pro-life voters who also have other priorities,” he tweeted.

Following the inauguration, Wear wrote for CT about three political priorities for evangelicals.

Democrats Willing to Fund Pro-Life Candidates to Win Back Congress