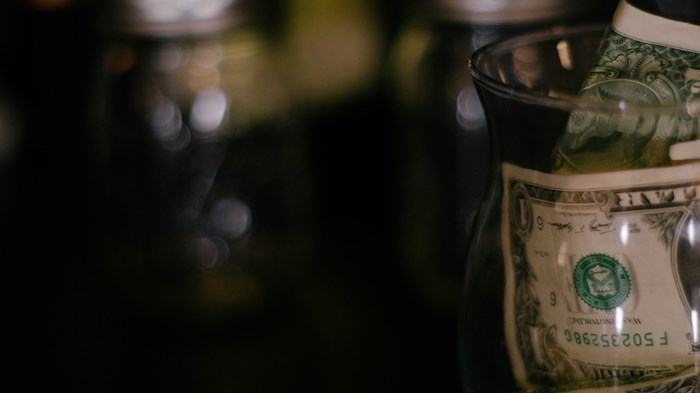 The most common reason Christians feel called to give generously is to reflect God’s character to others—a motivation that impacts everything from tithing to tipping.

Evangelical leaders, on average, say they tip a solid 20 percent, according to a survey released earlier this summer by the National Association of Evangelicals (NAE). A majority of NAE board members—which include leaders of denominations, ministries, and Christian colleges—will adjust their tip depending on service, with some giving servers higher tips for good service and others adding more when service was slow.

Especially with the skewed perceptions of Christians as bad tippers, “tipping is an opportunity to minister,” said Jim Tolle, pastor of El Camino Metro Church in Los Angeles. “Since life is difficult for so many—especially in the food service industry—I try to be as generous as I am able to be.”

Pastors like Tolle have a different approach to generosity than the average Christian, Barna Research found in a new report on The Generosity Gap. 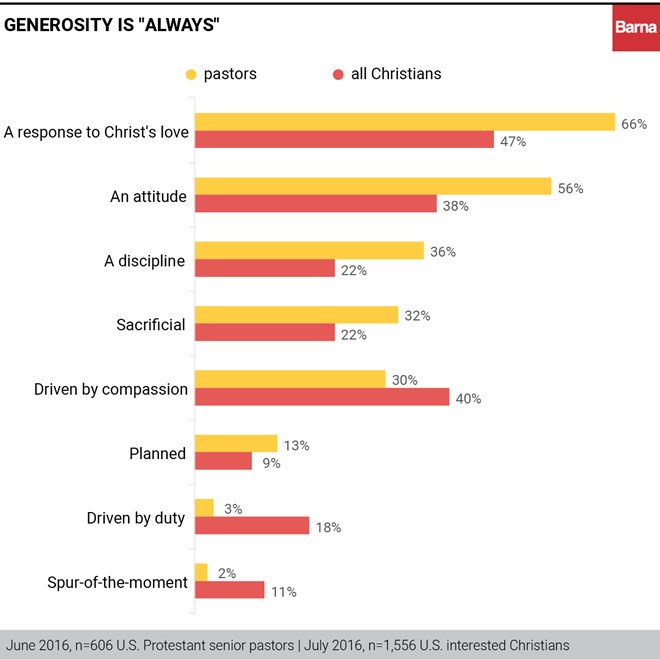 Pastors most often see generosity as an attitude (38%) and a response to Christ’s love (47%). A fair share of Christians agree, but they tend to view circumstances as a major factor in driving generosity, with 40 percent saying compassion is the primary force behind their giving.

American Christians are five times more likely than their pastors to consider generosity as spur-of-the-moment and as driven by duty, Barna reported.

More than any other generation, 45 percent of millennials believe that generosity is always or often spur-of-the-moment, compared to 20 percent of pastors, according to Barna. Similarly, a recent survey by the Evangelical Council for Financial Accountability (ECFA) found that “when millennials give to a ministry for the first time, they’re more likely than those over 35 to feel hopeful, generous, and spontaneous.” 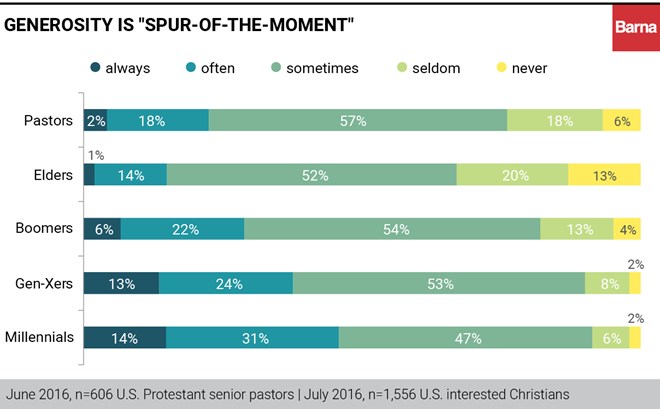 There’s plenty of social science behind the pressure to pony up in a particular situation. Economist Bruce Wydick wrote for CT about how community norms, identity, and a desire for equitable exchange have been shown to prompt altruism, such as “paying it forward” in the drive-thru at Starbucks.

“Jesus calls his followers to acts of giving that war with our psychology of personal safety, that violate social norms, that extend beyond self-interest,” he wrote. “This is hard to do because we battle all of these psychological, social, and economic instincts that have become programmed into our decision-making DNA.”

The varying approaches to generosity—whether it’s considered “an inward attitude and an outward discipline” or a response to a particular need—impact how Christians themselves give and serve the body of Christ.

Overall, the top-ranked forms of generosity in the Barna survey included caring for a sick person, volunteering, and signing up to be an organ donor. Those actions were viewed as at least twice as generous as some actions on the bottom: teaching Sunday school, babysitting for free, and giving $40 to church. The lowest ranked: driving someone to the airport.

Pastors and their congregants are most divided on whether volunteering is an acceptable substitute for financial giving. Almost 5 in 10 Christians say it’s okay (47%), compared to 1 in 10 pastors (9%), Barna found. Meanwhile, pastors are about twice as likely to speak from the pulpit in any given month about volunteering than about tithing (35% vs. 17%).

Finances can be a tricky topic to bring up from the pulpit, but an important one given the many scriptural teachings that address finances. As Todd Harper, who runs a Christian organization called Generous Giving, wrote:

A sermon laced with religious guilt may increase your offering numbers for the week, but guilt-induced behavior doesn’t last. We want to cultivate generous disciples who give out of gratitude for all that Christ has done for them.

God’s Word is full of opportunity language regarding giving. One of my favorite passages is 2 Corinthians 9:11: “You will be made rich in every way so that you can be generous on every occasion, and through us your generosity will result in thanksgiving to God.”

CT’s previous coverage of giving and tithing includes when tithing comes with a money-back guarantee and how churchgoing evangelicals say stinginess is more sinful than divorce.