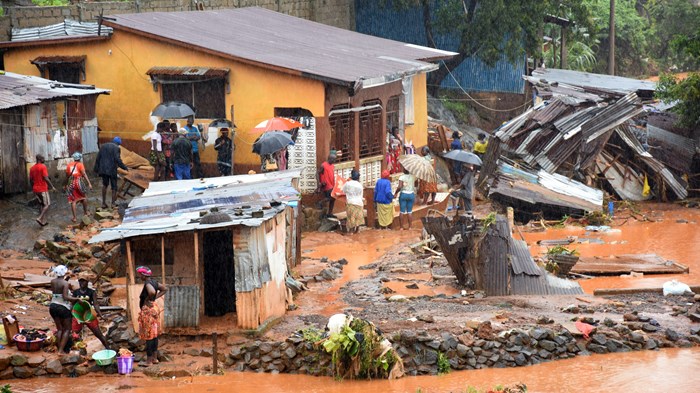 Christians in Sierra Leone are still reeling and recovering from the worst flooding their West African nation has faced in recent memory, after a mudslide covered homes and churches on the outskirts of the capital city two weeks ago.

More than 150 Christians lost their lives and hundreds more have been wounded or displaced in the disaster; the total death toll has surpassed 1,000. This week, bodies swept away by the floods washed up as far away as Guinea, 90 miles up the coast from Freetown.

While most in the mountainside town of Regent were sleeping when the mudslide hit, Power of Praise Ministry was holding an all-night prayer vigil. Pastor David S. Dumbuya, his wife, and his children died. One survivor told the Daily Telegraph that he lost 13 of his relatives who attended the event.

Further downhill, the floods landed on the western and central parts of the capital, where the majority of Freetown’s Baptist churches are located, according to the Baptist World Alliance.

Samuel Conteh, a leader with the Baptist Convention of Sierra Leone, reported that Bethany Baptist Church lost 60 members, making it one of the hardest-hit congregations reported so far. (Regent, alongside Mount Sugar Loaf, also happens to be home to the first Baptist church in Africa, founded in 1792 by a formerly enslaved African American who migrated there.)

Several other churches, including fellow Baptist and Pentecostal churches, have death tolls in the dozens, according to Jonathan Titus-Williams, general secretary of the Evangelical Fellowship of Sierra Leone. Many more believers lost their homes in the disaster.

Christians, who make up just 20 percent of the population in the majority-Muslim nation of approximately 7 million people, have led efforts to minister to victims and mourn the dead.

Evangelical and Pentecostal leaders orchestrated a period of fasting, followed by a citywide prayer event during the week following the mudslide, with as many as 300 victims buried in a single day, Titus-Williams said. The Council of Churches of Sierra Leone held an ecumenical service at the mudslide site last weekend.

Churches continued to meet for weekly worship on Sunday, though Freetown was still at risk of further flooding, particularly in its slums, Kanu said.

Nearly everyone has been impacted by the disaster and the efforts at recovery, as NGOs rally to care for victims and volunteers in the community skip work to help with the cleanup. World Hope’s focus has been on protecting children who were victims of the mudslide, making sure they have access to social workers and trauma counseling. “It’s a highly traumatic situation. Some of have lost whole families,” Kanu said.

The massive mudslide comes just a couple years after Sierra Leone’s Ebola outbreak, and some families have lost loved ones in both.

“Enough is enough,” United Methodist bishop John Yambasu prayed as he visited the mudslide site with fellow pastors. “Have mercy Papa God; have mercy upon this nation.”

Bishop emeritus Arnold Temple, a fellow Methodist (the largest Protestant group in Sierra Leone), challenged whether more could be done to mitigate the disaster. Some environmental groups suggested that deforestation and unregulated, sloppy construction alongside the mountain increased the risk of a mudslide.

“It may well be over 1,000 Sierra Leoneans we are mourning now. But why should about 1,000 of our compatriots’ lives end tragically like this?” Temple preached from a church near Regent. “Who should we really blame? We are bound at a point in the blame game to attribute the blame so that corrective measures can be put in place so that never again should we allow this to happen.”

Meanwhile, major cities around the globe have also been swamped by recent flooding, including Hurricane Harvey in Houston and a deadly monsoon in Southeast Asia. Floods in Nepal have damaged or destroyed 16 churches, including five Baptist churches, leaving them unable to gather for worship in the wake of the torrential rain.