Egypt Says Muslims Who Die Defending Churches Are Martyrs. One Just Did. 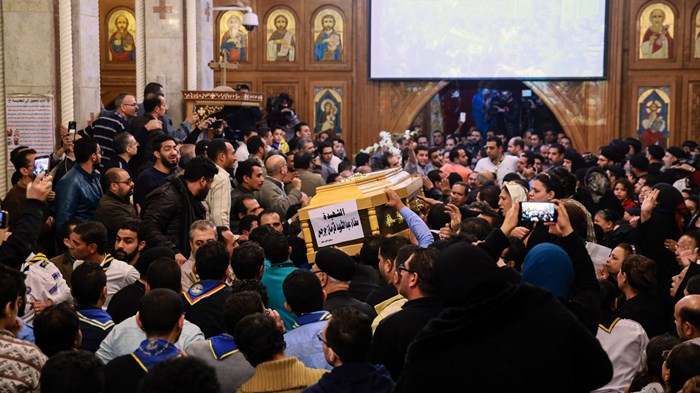 In the latest terrorism to strike Egypt, nine people died in Friday morning attacks around St. Mina Church in the southern Cairo suburb of Helwan.

Two Coptic Christians were shot and killed in their nearby storefront. Six others died as they exited morning worship.

The remaining victim was a Muslim police officer guarding the church.

The church guard, meanwhile, was hailed as a martyr.

One week earlier, Egypt’s Minister of Islamic Endowments declared the guarding of churches to be “a legitimate and national duty.” Those who die defending Christian houses of worship are to be considered martyrs.

“In our war against terrorism,” said Mokhtar Gomaa, “there’s no difference between Muslims and Christians.” Last month, 300 people were killed in a terrorist attack on a mosque in the Sinai, where Christians have fled violence.

President Abdel Fattah al-Sisi praised the police effort against the “vicious” attack, and urged heightened security. Two weeks ago, Egypt assigned more than 230,000 police to guard churches in advance of the Christmas holidays.

Even so, last week hundreds of local villagers ransacked an unlicensed church in Atfih, 60 miles south of Cairo. They were offended at rumors the nondescript building would install a bell.

Meanwhile, the Coptic Orthodox Church will hold its primary Christmas celebration in the largest church in Egypt, on land donated by the state in its still-under-construction new administrative capital city. (Orthodox Christians commemorate Christmas on January 7.)

Only two days prior, he visited Coptic Orthodox Pope Tawadros in his cathedral, wishing him a merry Christmas.

Terrorists aim to ruin Christian celebrations, said al-Tayyib said after the attack. So they would be most pained if love brings Muslims and Christians together.

Andrea Zaki, president of the Protestant Churches of Egypt, also urged Egyptians to stand together against terrorism. He praised the police for saving many lives.

“It is a desperate act to shake the stability of Egypt, violating the humanistic values of all religions,” he said.

“But it will not stop us from living out the message of Christ, in both our church and our country.”

Last May, 29 Copts were killed in a bus attack while traveling to visit a local monastery. In April, 45 were killed in Palm Sunday bombings at churches in the Delta cities of Tanta and Alexandria.

And last year in advance of Christmas, 29 people were killed at a bombing in a church adjacent to the Coptic cathedral in Cairo.

“We are starting to expect this,” said one woman at an Orthodox church 10 miles north of the attack, as word first spread. She did not wish to be identified.

“Yes,” her friend replied, “but that does not make it any easier to accept.”

Musad Sabry, pastor of a Helwan evangelical church near St. Mina’s, said people are struggling with the question of “why?”

Two of those killed were relatives of members of his congregation.

“I am very sad. These are peaceful people,” he said after attending the funeral, with thousands of others. “I believe God has his ways to make us a better people. But up until now, we cannot interpret how.”

“I am not afraid of terrorism, but it affects our ministry,” he said. “At first, people said, ‘We will overcome.’ But now I worry they will stay home.

“Even me. Maybe I will not send my children to church at night. I am a father, too.”

Earlier attacks in Tanta and Cairo’s main cathedral affected Christians, he said. They were sad, and they prayed, but it was always “somewhere else” and not close to home.

“Now the feelings are different. The terrorists are here.”

Egypt Says Muslims Who Die Defending Churches Are Martyrs. One Just Did.