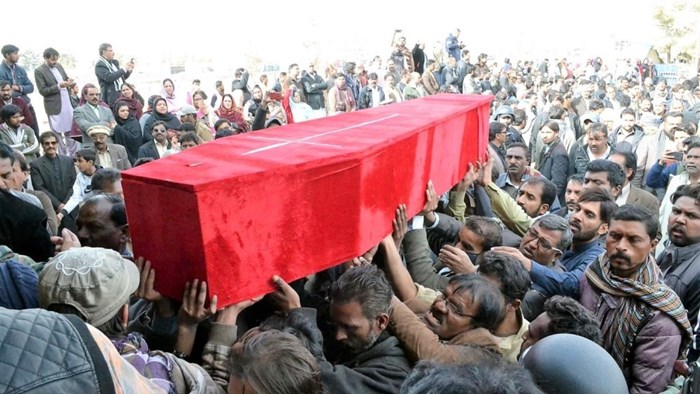 Image: World Watch Monitor
Mourners carry the coffin of one of the victims of Sunday's attack.

Pakistani Christian mourners buried their dead on Monday, only a week before the celebration of Christ’s birth.

“It was a pleasant morning,” said Sohail Yousuf. “We had sung songs, and children had presented a Christmas program. Pastor Simon Bashir had finished his sermon, and we were moving towards the altar when we started hearing gunfire outside the church.”

A manager in an insurance company, Yousef migrated 16 years ago to Quetta from Punjab after his wife, a government schoolteacher, was posted there.

“We bolted all the doors and were praying that God would protect each of us,” he said. “Then a suicide bomber blew himself up at the main door. The explosion shattered the door and injured many inside. When some rushed outside, they were injured by gunfire as the terrorists were on the church lawn. But soon the situation was brought under control by the volunteer church security guards and police present there.” 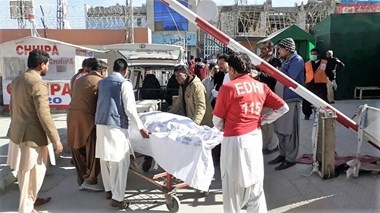 More than 50 people were injured in the church attack, many taken to hospitals in a critical condition.

“I came to know what was happening while the exchange of fire was taking place,” William said. “I phoned two youths in the choir. I could hear gunfire on the phone and then rushed to the church.”

Leading Pakistani newspaper Dawn confirmed that police intervened after the church security guard tussled with one attacker. About two hundred congregants were inside the church, which was decorated for Christmas, when the terrorists unleashed their attack. Islamic State (IS) has claimed responsibility but provided no proof it was involved.

There were four attackers, according to retired brigadier Samson Simon Sharaf, a political analyst who is close to security agencies.

“They were equipped with ample ammunition supply and were aiming to take worshippers hostage and kill them one by one, prolonging the scene of terror as much as they could,” he told World Watch Monitor.

Video footage shows a church security guard was quick to close the door when he saw two men approaching. This provided more time for local security personnel to respond.

“One terrorist was shot in the compound before he could blow himself up inside the church,” Sharaf said. “Meanwhile, the other one rushed to the church entrance where he blew himself up.”

The agencies chased the other two who fled, he said, and a search operation is ongoing. 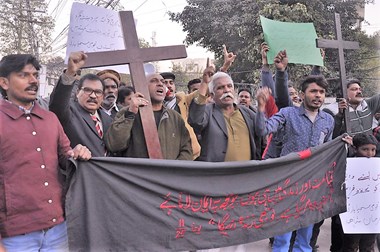 “The incident has taken place close to the sad day in the country’s history, December 16 [when Pakistani forces were defeated in 1971, leading to East Pakistan becoming Bangladesh],” Sharaf said. “Our enemy keeps reminding us of our history. This time Christians are targeted who stand united with other Pakistanis against the menace of terrorism.”

A team of about 70 youths worked to provide blood supplies, food, and other assistance to the injured, along with coffins for the burials, William said. He told World Watch Monitor that seven families living in the church compound, including that of the pastor, were told to vacate their houses. “All of them have moved to relatives until the area is given clearance.”

A few hours after the attack, Punjabi Christians staged a protest outside the Lahore Press Club, asserting that the government does not do enough to protect them against radical Islamic militant extremists. 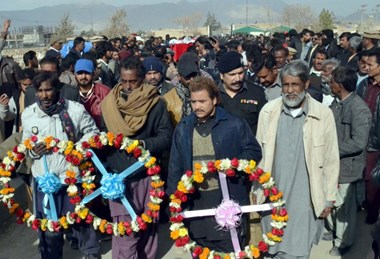 Mourners carry wreaths at the funeral of victims of the Bethel Memorial Church bombing, Quetta, Pakistan.

Quetta—the largest city of Balochistan, which is the largest province of Pakistan—sits along the Afghan border. The mineral rich, mostly hilly region is among the least populated areas in the country, and has long hosted an insurgent separatist movement. Many Christians in this province have migrated from Punjab but mostly remain unharmed by the separatists.

The Quetta Methodist church, established in 1959, came under the control of the Church of Pakistan in 1971 after six Protestant denominations, including the Methodist Church, united as one denomination.

On December 1, a seven-year-old boy and two others were killed during a hand grenade attack on the gates of a Christian colony in Chaman, also in Balochistan.

Last week, the EU envoy on freedom of religion or belief, Jan Figel, was in Pakistan, helping to set up an interfaith advisory commission to help stop misuse of the country’s blasphemy law.

“Brutal terrorist #ChurchAttack in #Quetta,” Figel tweeted after the attack. “Our solidarity is with families of victims & strong condemnation of heinous crime. #FoRB, protection of minorities and fight against terrorism need urgent & adequate actions of #Pakistani authorities.”

Since the 9/11 terrorist attacks in the United States, Christians in Pakistan have been the main religious minority attacked by communities under the pretext of blasphemy, and by terrorists on their places of worship. Six attacks on churches, Christian hospitals, and educational institutions immediately followed 9/11. Such attacks resurfaced again in 2013 with the suicide attack on All Saints Memorial Church in Peshawar province, which is also on the Afghan border. About 90 people died in that incident, including many children.

Then in March 2015, just before Easter, about 25 were killed when two churches in a Christian neighbourhood in Lahore came under twin suicide attacks. In 2016, a suicide attack in a Lahore park killed mostly Christians as they celebrated Easter.

This year, security was on high alert at Easter. In March, to prevent an attack, Pakistan’s military agency killed a man and arrested his ISIS-trained wife. (She was later released.) Security agencies are also on high alert for Christmas.

1 of 3
Mourners carry wreaths at the funeral of victims of the Bethel Memorial Church bombing, Quetta, Pakistan.More than 50 people were injured in the church attack, many taken to hospitals in a critical condition. Punjabi Christian protesters outside Lahore Press Club shortly after the church attack.
expand