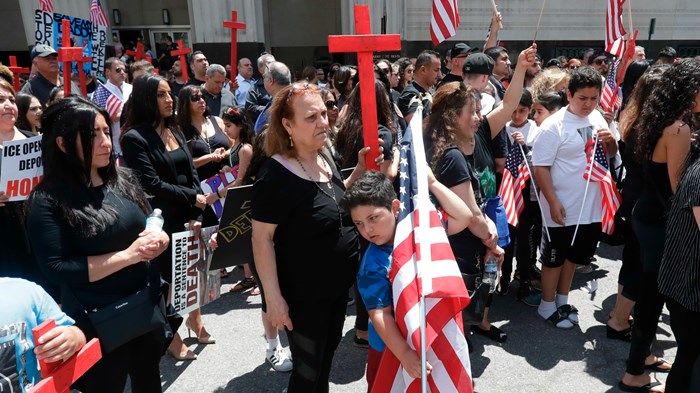 More than 100 Iraqi Christians arrested in immigration raids earlier this month will get to stay in the United States—at least for another two weeks, according to an order issued yesterday by a federal judge in Detroit.

Judge Mark Goldsmith halted the immediate deportation of the recently detained Iraqi nationals for 14 days, while he decides whether the district court or an immigration court has jurisdiction over their case, Hamama v. Adducci.

The court described their plight:

Petitioners state that because of their having resided in the United States and their status as religious minorities—many are Christian, others are members of oppressed Muslim sects—they are likely to be persecuted, tortured, or killed by members of the Islamic State in Iraq and Syria, the de facto government in many parts of Iraq.

The written order follows outcry from the Detroit area’s Chaldean Christians, who were shocked when officials detained scores of them on June 11. The American Civil Liberties Union (ACLU) has defended the detainees, who were identified by US Immigration and Customs Enforcement (ICE) because of their past criminal records.

“The court took a life-saving action by blocking our clients from being immediately sent back to Iraq,” stated Lee Gelernt, deputy director of the ACLU’s Immigrants’ Rights Project, who argued the case. “They should have a chance to show that their lives are in jeopardy if forced to return.”

The order prevents the government from deporting the Iraqi Christians, along with a few others from minority sects, before a court can hear their case. It applies to “all Iraqi nationals within the jurisdiction of the Detroit ICE field office with final orders of removal, who have been, or will be, arrested and detained by ICE.”

The evangelical leaders who make up the Evangelical Immigration Table—including the presidents of the National Association of Evangelicals, World Relief, and the Southern Baptist Ethics and Religious Liberty Commission—have also urged authorities to defer the deportations.