Should systematic theologies equally rely on Bible verses from the Old and New Testament? Experts weigh in.
Caleb Lindgren|June 13, 2017 01:30 PM 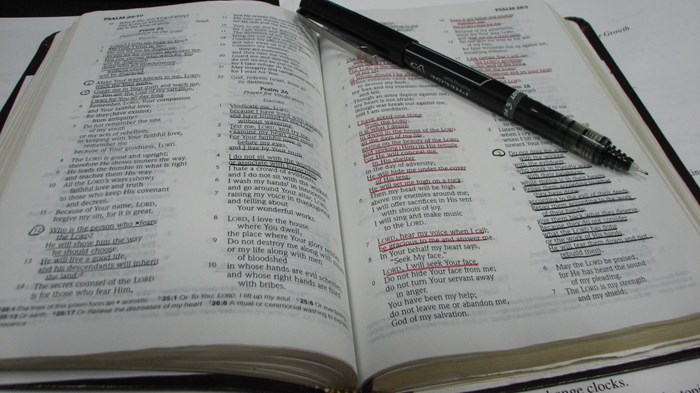 Do you ever feel that pastors are always preaching on the same Bible verses? Or that theologians always seem to reference the Gospels and Paul, but rarely the Old Testament?

You’re likely right, according to a new study of the 100 Bible verses cited most frequently in systematic theology books. Faithlife, the organization behind Logos Bible Software, examined more than 830,000 verses across more than 300 works to produce the list.

Unsurprisingly, the New Testament gets used a lot more than the Old Testament, with references to Paul’s letters making especially frequent appearances. The Gospel of John, the Gospel of Matthew, and the Book of Hebrews are also frequently cited.

By contrast, only 9 of the top 100 most-cited Bible passages in systematic theology come from the Old Testament—with Genesis accounting for 8 of them. (Isaiah is the ninth).

References to 1 Chronicles, 2 Chronicles, and Ezra are among the least common, with most of the historical literature in the Old Testament receiving very short shrift from theologians. Wisdom literature and prophecy faired a bit better, as did the Pentateuch. But only Genesis and Isaiah cracked the top 100 list.

Certain books had nearly every verse cited at some point by some theologian. For example, Romans and 1 Corinthians are completely accounted for, with each verse receiving at least one citation somewhere. But other parts of the Bible are not cited at all, such as portions of Genesis 5 and 10, genealogies in 1 Chronicles, and even in Matthew.

Logos produced its top 100 list by using research techniques employed for “big data” analytics to comb the systematic theology resources within its databases for all the Bible references, and then ranked the verses by frequency.

Logos also classified each reference for what sort of doctrine or topic it was used for, and offered breakouts of the top five references for a variety of theological categories, including Christology, pneumatology, soteriology, eschatology, and theology proper. After theology proper, Christology enjoys the most biblical references in its top five list, with the top verse (John 1:14) referenced 449 times. On the other end of the spectrum, eschatology (theology of the end times) and demonology (theology of demons) had very low frequencies for their top verses.

This could easily be explained by the relative availability of verses on each topic; but the frequency of citations for the different breakouts provides food for thought when compared. Does the high frequency of references for Christology or soteriology indicate the scriptural importance of those topics, or the concern of theologians to explain them? Perhaps both?

Perhaps most interesting—and potentially disturbing—is the dearth of Old Testament references among the 100 most-cited verses. This raises the question of whether the Old Testament is necessary for Christian theology, and whether it should be included in systematic theology more often.

Is such a strong preference for the same key verses, especially those in the New Testament, a problem in systematic theology? CT asked experts to weigh in.

"I was pleased to see Matthew 28:19 in the pole theological position, with its reference to the Trinity. That it is also a mission-minded verse doesn’t hurt either. I was surprised that Exodus 34:6–7, with its marvelous identification of the character of God, didn’t make it into the top 100, particularly in view of the fact that it’s the passage cited most often in the Bible itself. Should aspiring systematic theologians ascribe some kind of authority to this new resource itself? I hope that any biblically literate theologian knows, first, where to find the most important biblical statements pertaining to various doctrines (the content matters); second, how to read individual biblical statements in their larger literary contexts attend to the distinct contributions of larger forms of biblical discourse (the larger context matters); third, that all the sentences and books of the Bible are elements in a unified drama of redemption, of which the whole is greater than the sum of its parts (the whole counsel of God matters)."
~Kevin Vanhoozer, professor of systematic theology, Trinity Evangelical Divinity School

“The emphasis on particular verses for particular doctrines makes sense. The dangers of proof-texting, though, become more evident when one surveys the overall assortment. The lack of references to James in the top 100 might reflect Luther’s “analogy of faith” hermeneutical canon within the canon. That just one Old Testament verse outside of Genesis appears in the top 100 is far more shocking, since the Old Testament comprises three-quarters of the Christian Bible. Part of the problem may be the theological categories with which systematic theologies traditionally start. Many of its traditional categories are surely essential: theology proper, Christology, pneumatology, soteriology, and others. But what about other prominent biblical themes that could comprise distinct categories, yet were not inherited by us as such theological topics: themes of relationships (like friendship or family), economic justice, mission, etc.? Much of Scripture is missing in part because much of Scripture’s message is missing when theology starts with merely tradition’s categories.”
~Craig Keener, professor of New Testament, Asbury Theological Seminary

“Given the range of systematic theologies offered and the audiences to whom such theologians tend to write, one would expect three major subjects to be under-represented: the Holy Spirit, the Church (and its sacraments), and the cultural mandate—including the pursuit of justice as a crucial dimension of shalom-making. And this is what one finds. Furthermore, given the way in which predestination has been such a focus of modern Protestant orthodox fascination, we see verses mentioning it given extraordinary attention. Finally, given that systematic theology as a discipline has been highly skewed toward the abstract, it is no surprise that the most abstract writer in the Bible, Paul, gets pride of place. Since the overall shape of Scripture itself, however, is a story—and how often Paul himself refers to the narrative of the Bible—it is remarkable that references to actual biblical events rank so low. One wonders what Anabaptist, Pentecostal, African, Latin American, and Asian theologies will emphasize as they multiply, God willing, in the generations to come.”
~John G. Stackhouse, chair of Religious Studies, Crandall University

“I found it somewhere between interesting and alarming that the Old Testament features relatively sparsely in most systematic theologies. While one might expect New Testament references to dominate, even so I would have anticipated a decent spattering of the Old Testament precisely because the New Testament is saturated with Old Testament allusions and citations. I mean, the Psalms—especially 110, 2, 118, and 16—really do provide the substructure to apostolic preaching, and yet they are virtually absent from the analysis. The lesson I’m taking from this is that systematic theologians need to spend more time in biblical theology—in particular, in a biblical theology of the Old Testament.”
~Michael Bird, lecturer in theology, Ridley College

“We do well not to jump to conclusions too hastily, but we'd be foolish not to use this study as an occasion to think about our theological principles and of the best practices and examples out there. That said, it is rather shocking not to see Deuteronomy 6:4–5, Exodus 3:14, or Exodus 34:6–7 located in the top 10 verses, much less the top 100! Further, the marginalization of the Psalms surely says something, as well as the seemingly complete absence of the Song of Songs. If the seeming absences really evidence the absence of those texts from Christian theology, then we are the worse for it. Jesus proclaimed his gospel by means of its roots in eternity and in the economy of God's covenant with Israel. Therefore, we cannot be Christ-centered without being canonical in our approach. We can start with the beginning or the end for pedagogical reasons, so long as we realize that materially the life of God with Israel provides the only context within which Jesus serves as a mysteriously fitting climax.”
~Michael Allen, professor of systematic theology, Reformed Theological Seminary

“This collection of data is not representative of the Majority-World church and other minority groups, whose voices are mostly ignored, or at least underrepresented in such collections. In these days of rapid change and globalization, life is throwing up issues for us—especially as these are framed by vulnerable populations (migrants, insider believers, etc.)—that are often unaddressed in our received Western theologies. This is something that Willie James Jennings has poignantly noted in his book, The Christian Imagination. This implies an unspoken biblical hermeneutic that privileges received loci classici [texts that have been the traditional focuses for theology] rather than being open to passages that have been overlooked in traditional exegesis. I have often been amazed that my African students can find such theological meat in the genealogies of Scripture, which often contribute little to our Western theologies. These give evidence to them that this material has been sanctioned and endorsed by the ancestors over long periods of time.”
~William Dyrness, professor of theology and culture, Fuller Theological Seminary