In 18 nations across Central and Eastern Europe, religion is now essential to national identity.
Jeremy Weber|May 10, 2017 11:50 AM 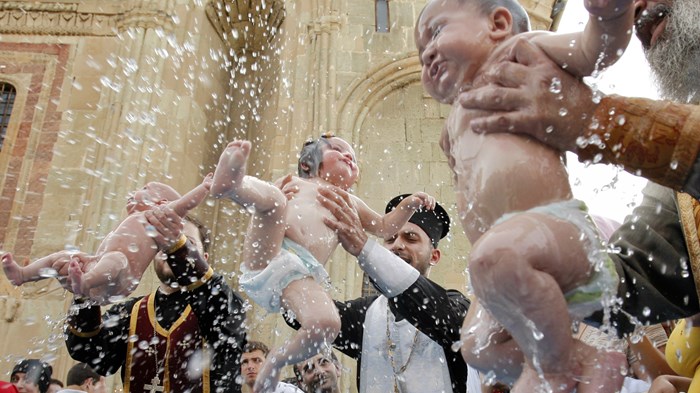 “Believing and belonging, without behaving.”

This is how the Pew Research Center summarizes the surge of Christianity in Europe around the fallen Iron Curtain roughly 25 years after the collapse of the Soviet Union.

“The comeback of religion in a region once dominated by atheist regimes is striking,” states Pew in its latest report. Today, only 14 percent of the region’s population identify as atheists, agnostics, or “nones.” By comparison, 57 percent identify as Orthodox, and another 18 percent as Catholics.

In a massive study based on face-to-face interviews with 25,000 adults in 18 countries, Pew examined how national and religious identities have converged over the decades in Central and Eastern Europe. The result is one of the most thorough accountings of what Orthodox Christians (and their neighbors) believe and do. 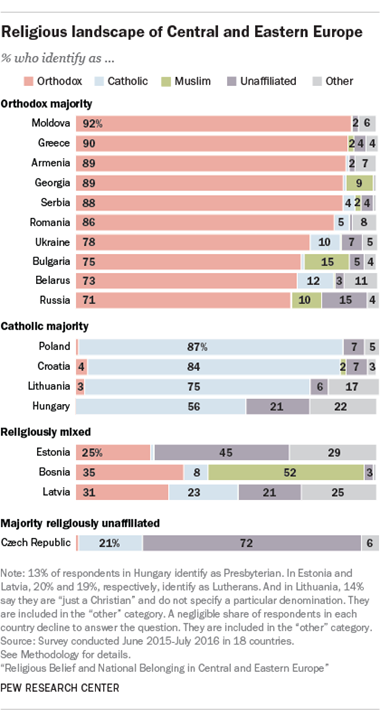 “Religion has reasserted itself as an important part of individual and national identity in many of the Central and Eastern European countries where communist regimes once repressed religious worship and promoted atheism,” Pew researchers stated. “Today, solid majorities of adults across much of the region say they believe in God, and most identify with a religion.”

Only the Czech Republic remains majority religiously unaffiliated (72%), followed by a plurality in Estonia (45%), then Hungary and Latvia (21% each).

Across countries, solid majorities say that in order to belong, one must identify with the majority religion. For example, most say being Orthodox is essential to truly being Russian or Greek, while being Catholic is essential to truly being Polish. The close connection between religious and national identity is stronger for Orthodox than for Catholics (regional medians: 70% vs. 57%). 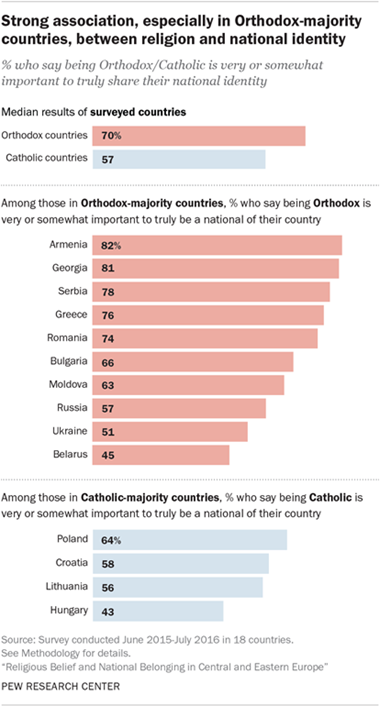 Surprisingly, this holds true regardless of church attendance. For example, in both Russia and Serbia, half of respondents favor state funding for the national church even though only 7 percent attend weekly.

Pew also examined the deep regard for Russia, whose 100 million Orthodox believers make it Eastern Orthodoxy’s largest homeland by far.

While there is no central authority in Orthodox Christianity akin to the pope in Catholicism, Patriarch Bartholomew I of Constantinople is often referred to as the “first among equals” (in Latin, “primus inter pares”) in his spiritual leadership of the Greek Orthodox and other Orthodox Christians around the world.

But only in Greece did a majority of Orthodox Christians view the patriarch of Constantinople as Orthodoxy’s highest authority. Instead, “substantial shares” give that honor to the patriarch of Moscow.

Many also believe it is Russia’s duty to protect Orthodox Christians worldwide, both against terrorism as well as the West (and its liberal values).

In every majority-Orthodox country except Ukraine, most people agree that Russia has an “obligation to protect Orthodox Christians outside its borders.” Nearly 3 in 4 Russians agree.

Pew summarized the differences in the “return of religion” to the region’s predominantly Orthodox and Catholic countries:

In the Orthodox countries, there has been an upsurge of religious identity, but levels of religious practice are comparatively low. And Orthodox identity is tightly bound up with national identity, feelings of pride and cultural superiority, support for linkages between national churches and governments, and views of Russia as a bulwark against the West.

Meanwhile, in such historically Catholic countries as Poland, Hungary, Lithuania and the Czech Republic, there has not been a marked rise in religious identification since the fall of the USSR; on the contrary, the share of adults in these countries who identify as Catholic has declined. But levels of church attendance and other measures of religious observance in the region’s Catholic-majority countries are generally higher than in their Orthodox neighbors (although still low in comparison with many other parts of the world).

The link between religious identity and national identity is present across the region but somewhat weaker in the Catholic-majority countries. And politically, the Catholic countries tend to look West rather than East: Far more people in Poland, Hungary, Lithuania and Croatia say it is in their country’s interest to work closely with the U.S. and other Western powers than take the position that a strong Russia is necessary to balance the West.

The survey, part of the Pew-Templeton Global Religious Future project, was conducted from June 2015 to July 2016.

CT’s previous reporting on Eastern Orthodoxy includes its humbled yet historic council in Crete and how Pope Francis and Patriarch Kirill made Christian history in Cuba.