Two arrested from private university in Pyongyang that gives evangelicals a way in.
Kate Shellnutt|May 12, 2017 11:51 AM 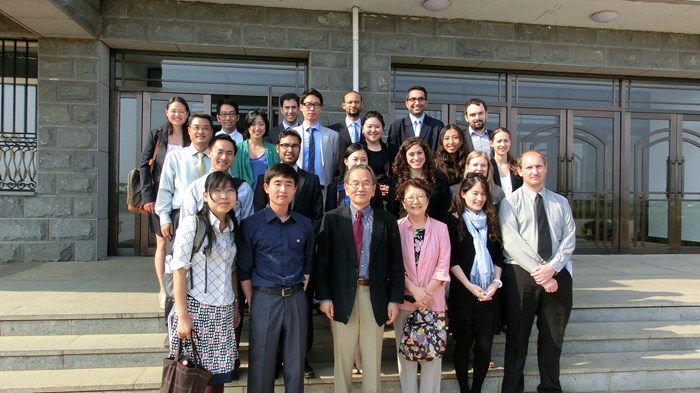 The recent arrest of two American citizens working in North Korea has brought attention to the curious case of Pyongyang University of Science and Technology (PUST), an American-founded, evangelical-affiliated school in the capital city of the world’s most notorious dictatorship.

It’s hard to think of a less likely place for American Christians to teach than North Korea, a country the United States has not had diplomatic ties with for over 60 years and where religious freedom does not exist.

Kim Hak Song and Kim Sang Duk, both Christians and professors teaching at PUST, the only private university in North Korea, were detained last month on charges of “hostile” acts or intent against the North Korean government—the same allegation that kept Youth With a Mission missionary Kenneth Bae in prison for more than two years, longer than any other American arrested in the country. (Bae was finally released, in ailing health, in 2014.)

PUST, which CT featured in 2012, is open about its affiliation but understandably reserved about evangelicalism. Its spokesperson has stated that the recent arrests are unrelated to activity at the school, which was founded by Korean-American evangelical James Kim in 2010 following the success of a similar venture—Yanbian University of Science and Technology (YUST)—on the Chinese side of the border.

“An unofficial deal was struck between PUST and the regime that allowed the evangelicals to build the school in Pyongyang, fund it, and teach the students, as long as they do not discuss Christianity in public,” Suki Kim, a writer who lived for six months at PUST, toldThe Washington Post. “PUST offers a mutually beneficial arrangement for both North Korea and the evangelicals. The regime gets free education for its youth and a modern facility, which can be used for propaganda, while the evangelicals get a footing in the remote nation.”

Both PUST and YUST hire mostly Christian faculty: dozens of US citizens, along with other foreigners, who consider the position missionary work. Suki Kim said the government regulates all curricula, but mostly allows the faculty to practice their faith in private. At any time, officials could opt to punish Christians for their activity or affiliations, sentencing them to severe punishments like lifelong manual labor or death.

Kim Hak Sang worked as a professor in agriculture, hoping to develop more efficient farming methods to allow North Korea to better feed its people. Kim Sang Duk (who also goes by Tony Kim) was a professor at YUST who visited the Pyongyang campus as a guest lecturer in accounting. He was detained when trying to board his return flight to China. Their arrests bring the total number of Americans behind bars in North Korea to four.

“North Korea is persecuting their savior, a person who came to help them,” one of Kim Hak Sang’s classmates told the Christian Post. “This is wrong.”

The professor raised funds for his work at PUST through the Sao Paulo Oriental Mission church, one of dozens of congregations around the globe that support professors at the two schools. Though they “can't directly preach the word of God, we can indirectly influence the people there by being good Christians,” said Abraham Kim, whose Chicago University Bible Fellowship donated $30,000 to help fund PUST’s medical school, according to Business Insider.

The school has around 500 undergraduate and 60 graduate students, mostly male, studying fields like agriculture and life sciences, international finance, and computer engineering.

Under the “Great Leader” Kim Jong-un, North Korea remains the worst place in the world for Christian expression (or any kind of religious freedom), and is still at a standoff with US forces. Many are looking to President Donald Trump to address the detention of the two PUST professors, as well as two Americans—also believed to have ties to the church—who were taken into custody over the past two years.

“Obviously, this is concerning. We’re well aware of it and we’re going to work through the Embassy of Sweden ... through our State Department, to seek the release of the individuals there,” said White House spokesman Sean Spicer on Monday.

Toronto megachurch pastor Hyeon-Soo Lim also remains detained in the country, arrested in 2015 after more than 100 visits to North Korea. He was accused of “subversive plots and activities” to set up a religious state.

In 2014, North Korea detained American Jeffrey Fowles for leaving behind a Bible, and arrested and released Australian missionary John Short, 75, for spreading Bible tracts near a Buddhist temple in Pyongyang. American missionary Robert Park deliberately got himself arrested and spent six weeks in a North Korean prison in 2010. "My hope was, through sacrifice, that maybe there would be repentance and people could come together to address issues in North Korea," Park told CT in an exclusive interview.

In addition to profiling PUST, CT previously featured the testimony of Joseph Kim, who escaped North Korea and found Christ through the Chinese church.