Term is “increasingly either confusing, or unknown, or misunderstood to students,” says director.
Kate Shellnutt
October 06, 2017 9:27 AM 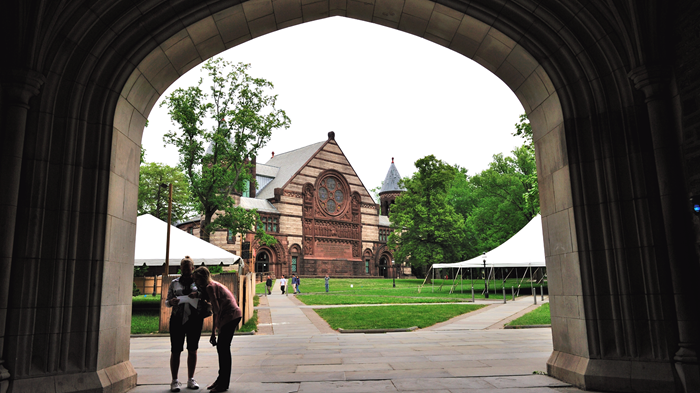 More than 80 years ago, the first president of Princeton Evangelical Fellowship aspired for the organization to allow students “to enjoy Christian fellowship one with another, to bear united witness to the faith of its members in the whole Bible as the inspired Word of God, and to encourage other students to take, with them, a definite stand for Christ on the campus.”

In 2017, the Ivy League student ministry remains fully committed to this purpose … just without calling themselves evangelical.

“There’s a growing recognition that the term evangelical is increasingly either confusing, or unknown, or misunderstood to students,” the organization’s director, Bill Boyce, told The Daily Princetonian.

It’s not an issue limited to the 8,000-student campus; a number of evangelicals across the country share his concerns, particularly after last year’s election linked evangelical identity with support for President Donald Trump in the public eye.

Princeton Christian Fellowship began discussing its name change prior to Trump’s election, though the decision was officially voted into place in May and announced at the start of this school year, the school paper wrote.

“We’re interested in being people who are defined by our faith and by our faith commitments and not by any sort of political agenda,” said Boyce, who has led the campus group since 1985.

Princeton Christian Fellowship’s decision corresponds with younger Christians’ draw to institutions that focus on Jesus and downplay labels, according to Kara Powell, executive director of the Fuller Youth Institute.

“I don’t see it as a negative move,” said Powell. “Anything that puts Christ in the title is something that I applaud, especially because as I see organizations using the term evangelical less, they’re still adhering to core principles.

Of the 24 recognized Christian groups at Princeton (including chapters of InterVarsity Christian Fellowship and Baptist Student Fellowship), not a single one uses evangelical in its name.

Princeton Christian Fellowship holds weekly worship on Fridays, plus retreats, mission trips, and parties during the semester. For evangelism on campus, the group offers an outreach program where students can ask them faith questions in exchange for a free quesadilla.

The president of the ministry, a senior, said students support the change, and don’t miss the evangelical name. “Aside from the nostalgia, there’s no good reason to keep it around,” Jay Sourbeer told the Princetonian.

Following Trump’s election, several leaders, authors, and bloggers announced they would no longer identify as evangelical, while others called into question the usefulness of the term.

A CT Pastors reader survey revealed that 1 in 3 evangelical pastors felt less comfortable identifying as evangelical around non-Christians after the election.

On the CT site, theologian Ron Sider defended the label, based on its meaning throughout church history. Baylor University’s Thomas Kidd offered a counter-perspective, arguing “whatever its historic value, the word evangelical in America has become inextricably tied to Republican politics.”

“If Princeton's campus ministry wishes to maintain its focus around its members’ shared doctrinal commitments while protecting their freedom to apply those commitments in a variety of political ways, it might do well to shed the label evangelical,” said Mika Edmonson, who participated in a roundtable discussion over evangelical identity at The Gospel Coalition in August.

Edmonson, a Orthodox Presbyterian Church pastor in Grand Rapids, brought up how—in addition to political baggage—evangelical identity can skew white since African Americans in particular are less likely to use the term.

“If the Princeton campus ministry found the term evangelical obstructing cultural and ideological diversity among their ranks, they've done the right thing by leaving it aside,” he said. “As ministries make more room for political and cultural diversity within their midst, they may increasingly choose to drop the term.”