Survey finds half of Protestants prefer to worship with people who share their views—and half believe they already do.
Bob Smietana - Facts & Trends|August 23, 2018 10:00 AM 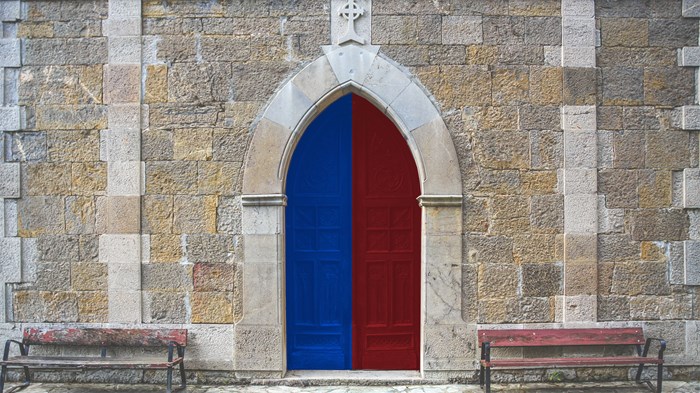 America has become increasingly divided by politics in recent years.

So have its Protestant churches.

Those are among the findings in a new report on churchgoing and politics from Nashville-based LifeWay Research.

“Like many places in America, churches are divided by politics,” said Scott McConnell, executive director of LifeWay Research. “And churchgoers under 50 seem to want it that way.”

For the study, LifeWay Research surveyed 1,010 Americans who attend services at least once a month at a Protestant or nondenominational church.

Forty-six percent agree with the statement, “I prefer to attend a church where people share my political views.” Forty-two percent disagree. Twelve percent are not sure. 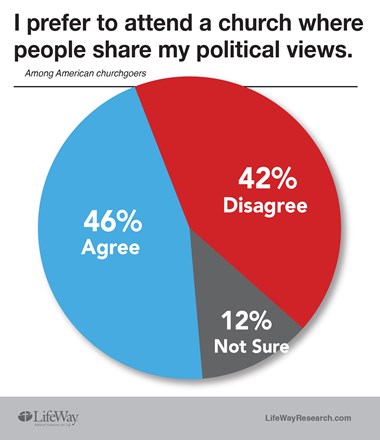 “Politics doesn’t seem to be a high priority for most Protestants when choosing a church to attend,” he said. “But for a small group of churchgoers, it’s really crucial.”

LifeWay Research also asked Protestant churchgoers if their political views match those of people in their church. Half agree (51%), while 19 percent disagree and 30 percent are uncertain. 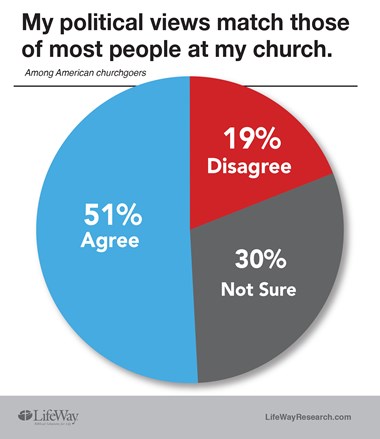 Protestant churchgoers and other Americans who attend worship services at least once a month made up about half of voters (52%) in the 2016 presidential election, according to data from Pew Research.

Churchgoers might stick around even if they disagree over politics.

A previous LifeWay Research study of Protestant and nondenominational churchgoers found only 1 in 10 (9%) would consider leaving their church over political views.

“More than a few churchgoers in the most recent study (30%) don’t know the political views of people besides them in the pews,” said McConnell.

“Politics isn’t the only thing that churchgoers care about,” he said. “In some churches, politics isn’t mentioned at all—at least in the pews.”

LifeWay Research conducted the study Aug. 22–30, 2017. The survey was conducted using the web-enabled KnowledgePanel®, a probability-based panel designed to be representative of the U.S. population. Initially, participants are chosen scientifically by a random selection of telephone numbers and residential addresses. Persons in selected households are then invited by telephone or by mail to participate in the web-enabled KnowledgePanel®. For those who agree to participate, but do not already have Internet access, GfK provides at no cost a laptop and ISP connection.

For this survey, a nationally representative sample of U.S. Protestant and nondenominational adults (18 and older) which attends religious services once a month or more often was selected from the KnowledgePanel®. Sample stratification and base weights were used for gender, age, race/ethnicity, region, metro/non-metro, home ownership, education, and income to reflect the most recent U.S. Census data. Study-specific weights included for gender by age, race/ethnicity, region and education to reflect GSS 2016 data. The completed sample is 1,010 surveys. The sample provides 95 percent confidence that the sampling error does not exceed plus or minus 3.1 percentage points. Margins of error are higher in sub-groups.