Tourism expected to surge as 1,500 landmines are removed from Jordan River’s shore, with remaining 5,000 hopefully gone by next Christmas.
Jayson Casper|December 19, 2018 08:00 AM 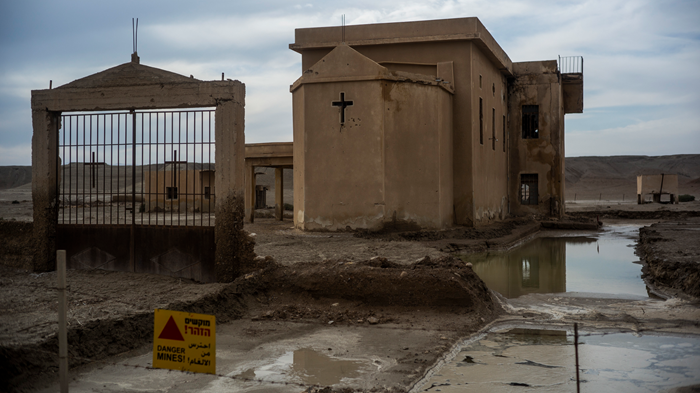 For 50 years, John has baptized Jesus in private.

But last week on the western bank of the Jordan River, landmines were cleared to allow visitors a first look at a faded fresco of the baptism in a crumbling Ethiopian Orthodox monastery.

“Israel placed the mines between 1967 and 1971 because there was a war,” Marcel Aviv, head of the Israel National Mine Action Authority, a branch of the Defense Ministry, told the Times of Israel, standing a few hundred yards from Jordan.

“But now it’s empty because it’s a border of peace.”

Israel partially reopened the Qasr al-Yahud baptismal site in 2011. But visitors could only trek a narrow path from the Greek Orthodox St. John the Baptist Monastery to the Jordan River.

Their number has steadily grown, with the Epiphany holiday—observed on January 18—a particularly popular draw.

Last year, more than 590,000 visitors came, according to Israeli newspaper Haaretz. So far in 2018, more than 800,000. Once the landmines are fully cleared, Aviv believes the number will triple.

De-mining began in earnest in March, though the initial agreement between the churches, the Israeli government, and the Palestinian Authority was signed in May 2016.

Now accessible along the one-mile stretch of historic churches are properties belonging to the Greek, Franciscan, and Ethiopian Orthodox. Clearance still awaits for the Russian, Syrian, Romanian, and Coptic facilities.

The oldest is a Byzantine church which was destroyed by an earthquake in 1024 A.D. and rebuilt in the 12th century. Consistently a pilgrimage site, the other churches were built from the 1930s onward.

These ancient monasteries may or may not appeal to Protestants, who make up half of the yearly 2.6 million religious tourists in Israel. (CT previously reported on how your vacation can help the Christians of the Middle East, but that Arab Christians are disproportionately infrequent pilgrims.)

There is a competing baptism site on the Jordanian side of the river.

“For what it’s worth, a mosaic map of the sixth century in the floor of an Orthodox church near Mt. Nebo indicates that John the Baptist baptized on both sides of the Jordan,” said Imad Shehadeh, president of the Jordan Evangelical Theological Seminary. “They tried to be politically correct even back then.”

Qasr al-Yahud means “Castle of the Jews” in Arabic, but some scholars believe that “castle” is a corruption of a term originally meaning “break.” This would refer to the tradition that the site also marks where God “broke” the Jordan River, allowing the Jews to cross into the Promised Land.

Tradition also locates here the ascension of Elijah into heaven.

The work, made complicated by recent flooding, is carried out by an Israeli firm and the British charity HALO Trust. Over half of the $4.6 million project was funded by donations.

A representative of each church accompanies the minesweepers upon entry, to ensure nothing is stolen or damaged. Booby traps were laid in some buildings to prevent their use as hideouts.

Palestinian staff provide logistical support, helping also to earn local trust. For the past eight years, HALO has cleared other sites in the West Bank, coordinating between Palestinians and Israelis.

But there are still approximately 35 square miles of landmines in the West Bank, according to The Wall Street Journal.

Aviv aims for Qasr al-Yahud to be fully cleared by December 2019. He has a vision that Israel will be fully de-mined—including the Golan Heights and Syrian border—in the next two decades.

Will the baptism site foreshadow an epiphany of peace?

“This is such a special place to be as a Christian,” Agneiszka Witek, a pilgrim from Warsaw, Poland, told the Times of Israel.

“I’m happy for the peace between Israel and Jordan … I believe they can live together on the same river.”