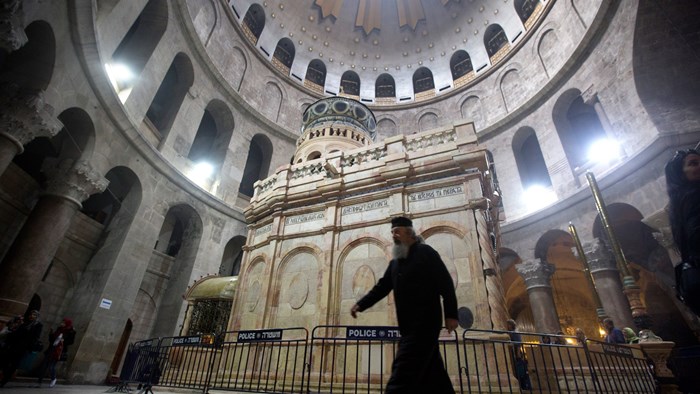 Image: Lior Mizrahi / Getty Images
Jesus' tomb inside the Church of the Holy Sepulchre in Jerusalem

In an action not seen in more than a century, the leaders of Jerusalem’s churches closed the doors of the Church of the Holy Sepulchre on Sunday in a show of united protest. The dramatic decision comes in response to moves by Jerusalem authorities to begin collecting tens of millions of dollars in taxes from churches, as well as proposed legislation to confiscate church-owned land.

The Church of the Holy Sepulchre—considered by many Christians to be the site of Jesus’ crucifixion, tomb and resurrection—is jointly managed by a cadre of Orthodox and Catholic churches. It is one of the most-visited sites in Israel, and its closure came as a sudden shock, especially with Easter celebrations approaching.

In a defiant statement released at the time of the closure, church leaders called the municipality’s new policy a “systematic campaign against the churches and the Christian community in the Holy Land,” according to The Jerusalem Post.

“Recently, this systematic and offensive campaign has reached an unprecedented level as the Jerusalem Municipality issued scandalous collection notices and orders of seizure of church assets, properties and bank accounts for alleged debts of punitive municipal taxes—a step that is contrary to the historic position of the churches within the Holy City of Jerusalem and their relationship with the civil authorities,” the church leaders stated. “These actions breach existing agreements and international obligations which guarantee the rights and the privileges of the churches, in what seems as an attempt to weaken the Christian presence in Jerusalem.”

In a dramatic about-face earlier this month, the municipal authorities of Jerusalem announced their intention to collect back taxes on property owned by churches in the city, totaling 650 million shekels (US$186 million).

The city property tax, called arnona, targets businesses and offices belonging to the historic churches in Jerusalem. Houses of worship will be exempt from taxation, but all other church properties will be fair game.

The unexpected proclamation came at a time when the city of Jerusalem faces budget shortfalls and mounting debt.

“The Jerusalem Municipality has excellent and respectful connections with every church in the city, and it will continue protecting their freedom of religion,” stated city leaders, according to the Post. “However, it cannot accept the situation in which hotels and business are exempted from paying property tax only because the property is owned by a church.”

The announcement, made the first weekend of February, blindsided ecclesial leadership in the Holy Land, who accuse Nir Barkat—Jerusalem’s mayor and a primary force behind the change—of betraying international treaties and centuries of precedent. Neither traditional legal interpretations nor historic precedent has quelled the movement of Barkat and his administration to force the churches to pay.

Authorities in Jerusalem already seized hundreds of thousands of dollars from the largest churches in the city, including the Greek Orthodox, the Catholics, the Anglicans, and the Armenian Orthodox Church. More seizures are on the way.

According to Haaretz, the Anglican Church in Jerusalem confirmed its bank accounts had been frozen by the city, which claimed to freeze the accounts of other major churches as well.

In its initial statement, the municipality rebuked the idea that commercial land—such as hotels, banquet halls, and other businesses—should be free from taxation when owned by religious institutions. “These are not houses of worship, which are exempt by law from paying arnona, but properties that are used for commercial activities,” stated city leaders, according to Haaretz.

But the new collection strategy marks a serious shift. Never before have church properties, commercial or not, come under the arnona tax.

That changed after Gabriel Hallevy, a law professor at Israel’s Ono Academic College, provided his legal opinion asserting religious tax exemptions are exclusive to assets intended for worship or religious education. Citing Hallevy’s opinion, Barkat’s administration started its campaign to collect back taxes on 887 properties owned primarily by churches and the United Nations.

Previously, the state of Israel disallowed Jerusalem from collecting such taxes. But equipped with Hallevy’s new legal pronouncement, and facing massive debt, which Barkat blames in large part on inadequate state funding, the municipality has vowed to end what it sees as a free lunch.

“We will no longer agree to have residents of Jerusalem fund these enormous sums,” said Barkat, according to The Times of Israel. “The state needs to face the consequences of its decisions. Either the state will compensate us and return the money that is meant to develop the city, or we will collect it as required by law. We intend to conduct administrative and legal enforcement, and if need be, we won’t hesitate to take the matter to the High Court of Justice.”

Especially since President Donald Trump announced his administration’s game-changing public recognition of Jerusalem as Israel’s capital last December—manifested in plans to move the US embassy from Tel Aviv to Jerusalem, now by May—Israeli authorities have taken increasingly forceful action to tighten control over the city at the center of global religious and regional ethnic disputes.

Jerusalem’s churches have never had to pay municipal property taxes—not under Ottoman, British, or Jordanian rule stretching back hundreds of years. Despite the new measures, the churches intend to keep it that way.

In a united front, the patriarchs and heads of churches in Jerusalem—a group of 13 of the holy city’s top ecclesial leaders—penned a letter in opposition to the municipality's announcement.

“We, the heads of churches in Jerusalem, declare that such a statement is contrary to the historic position between the churches within the Holy City of Jerusalem and the civil authorities across the centuries,” reads the February 14 letter. “The civil authorities have always recognized and respected the great contribution of the Christian churches, which invest billions in building schools, hospitals, and homes, many for the elderly and disadvantaged, in the Holy Land.”

Some church representatives assert the matter is rooted not in new legal revelations, but in the feud between Jerusalem’s mayor and Israel’s Finance Ministry. Barkat accuses the ministry of withholding promised funding as part of a scheme of the finance minister, Moshe Kahlon, to target Barkat’s administration.

Barkat has argued for greater funding, pointing to the unique financial challenges facing Jerusalem. To make budgetary ends meet, Barkat has conducted a campaign that has included threatening to fire thousands of municipal workers and pressuring the Finance Ministry for larger grants via billboards and newspaper ads.

“The state played a game at the expense of the residents of Jerusalem and illegally exempted the churches and the UN from paying property taxes in parts that are not places of worship without legal basis,” reads a statement from the municipality, according to the Times. “The financial damage caused over the years to Jerusalem due to the state’s stance is almost NIS 1 billion [shekels].”

But without a deal from the state, it will be churches and international organizations like the United Nations that foot the bill.

Wadie Abunassar, a spokesperson for the Latin Patriarch of Jerusalem, was quoted by Haaretz as calling Israeli authorities to “do what is necessary for guaranteeing respect of old understandings between civil authorities on one hand, and church and international bodies on the other hand.”

The Anglican Episcopal Diocese of Jerusalem said the new tax threatened its ability to maintain its many social care initiatives in the city, along with its numerous schools, training centers, and health care facilities. Likewise, the Vatican’s Notre Dame of Jerusalem hotel, restaurant, and conference center (among many other such enterprises) are set to face fines, stretching the Roman Catholic Church’s resources in the ancient city.

Representatives of the Greek Orthodox Church, which owns approximately 30 percent of the Old City of Jerusalem and claims the largest stake of any denomination in the Church of the Holy Sepulchre, condemned the new tax standard, as did key stakeholders across Jerusalem’s Christian denominations.

Liens placed on church accounts have already stunted their daily operations in Jerusalem.

“All of our assets are frozen,” a representative of the Greek Orthodox patriarchate told the Times. “We can’t pay for food, salaries, administration, nothing.”

The church leaders boycotted their annual meeting with the mayor that was supposed to happen last week in protest of the tax.

In their ecumenical letter, the churches say with one voice that the new status quo cannot stand. “Such a measure both undermines the sacred character of Jerusalem, and jeopardizes the Church’s ability to conduct its ministry in this land on behalf of its communities and the world-wide church.”

Echoing the February 14 letter, the letter issued by the churches today concludes, “as a measure of protest, we decided to take this unprecedented step of closure of the Church of the Holy Sepulchre. Together with all Heads of Churches in the Holy Land, we stand united, firm and resolute in protecting our rights and our properties.”