Board unanimously decides "it is time for a new season of leadership."
Kate Shellnutt|January 10, 2018 07:03 PM 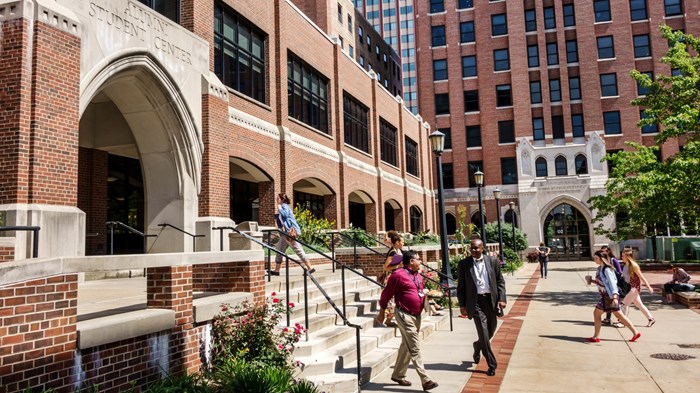 “Let there be no mistake that the Board of Trustees holds these three men in high regard for their ethical, moral, and spiritual leadership,” stated Randy Fairfax, chair of the board of trustees. “They are godly, honorable men to whom we entrust to the Lord and offer our deep gratitude for their years of faithful service to Christ and to Moody.

“However, we are unanimous in our decision that it is time for a new season of leadership. I ask that you be in prayer for them and their families.”

Nyquist took the helm of Moody in 2009, after serving as president and CEO of Avant Ministries, a church planting missions agency based in Kansas City, and pastoring churches in Iowa and Nebraska.

Mogck had served as COO and executive vice president since 2012. In recent years, he was involved in efforts to lease certain Moody properties and adjust zoning for campus buildings. Prior to Moody, he was an executive and attorney for Carlson Hotels.

The news was announced in an email sent to the Moody community Wednesday evening, following a special meeting of the board of trustees.

“Understandably, there are many questions at this time,” stated Fairfax. “Please know that we are working diligently through everything, and will stay in regular contact with you first, our Moody family, and with our many partners and friends as well.

“I ask for your prayers for the Board, our interim leadership team, and the entire Moody community during this next season. God has been faithful to Moody since 1886, and we continue to seek His favor as we move forward.”

Yesterday, Moody Radio host Julie Roys—who recently detailed allegations against the school’s administration on her blog—revealed that she had been fired.

After hosting Moody’s weekly program Up for Debate for more than a decade, Roys posted that:

I received an email from Greg Thornton, MBI senior vice president of media, informing me that “after consulting with the Executive Committee of the Moody Board, leadership is terminating your employment.” No reason was given and I was informed that my boss, Program Manager Dan Craig would be at my house in two-and-a-half hours to pick up my laptop.

An MBI spokesman confirmed that Roys was no longer employed with Moody Radio.

Last Thursday, the Christian speaker and author wrote on her blog that MBI was in “unprecedented crisis” due to ongoing tensions between administration and staff, as well as theological concerns she raised over certain faculty members.

Moody responded by calling the allegations misleading, though the issues in question were still being reviewed by its leadership.

“While the blog post presents a limited perspective on the assertions raised, Moody is engaged in a comprehensive review of these matters to confirm that past events have been properly cared for and that any other matters are handled in an appropriate manner,” the school replied in a statement.

The executive committee of Moody’s board of trustees discussed the issues “at length” during a meeting last week, and the full board had gathered today for further consideration.

Much of the current tension at Moody stems from the Bible college’s announcement back in November that it would be shuttering its campus in Spokane, Washington; reducing programs like distance learning; and terminating faculty, including 10 percent of its Chicago campus professors, following recent drops in enrollment.

The school reported a total enrollment of 3,500 in fall 2017. Over the past seven years, numbers have dropped, including full-time freshmen at its main location in Chicago declining by nearly a quarter.

The cuts to programs and faculty resulted in backlash from the Moody community—particularly an anonymous group of staff members, who blamed Nyquist and the administration for the drastic cuts and criticized them for not fostering better transparency and trust on campus.

“If the rumors and distrust persist on this campus, it may very well be because these decisions, by being postured on some vague spiritual ‘high ground,’ have actually engendered a culture of fear,” they wrote in an open letter in the student newspaper, The Moody Standard.

After the resignations, the “Moody Anonymous” group told CT its members were grateful to see their leadership held accountable, but still had questions and craved transparency from the institution.

“Some sort of systematic answer from the trustees to the allegations would go a long way,” the group wrote by email. “Trust has been broken within Moody, and it is not easily repaired. Every statement we've received from our administration seems to gloss over that point in favor of protecting Moody’s reputation.

“At this point, any attempt to save face without sharing information is still damaging to our trust. We need to see intentional authenticity and clarity from our remaining leaders, and we need to see the willingness to sacrifice for the sake of the truth.”

Their initial letter called out the school for funding a portion of a new building being constructed in honor of alumnus Gary Chapman, as well as for freezing faculty pay yet not tightening salaries at the administrative level.

Roys has added several other concerns to the list, citing her own investigations, though not all are shared by the Moody Anonymous staff members.

Last month, she shared her findings directly with two members of Moody’s board of trustees who “found the evidence … convincing and assured me that the rest of the board would act swiftly to address issues and remove guilty parties.”

In a blog post on Tuesday, Roys offered more detail on her claims of unethical behavior among Moody’s leadership and board members, including Nyquist’s housing arrangement. She wrote:

I am glad board members are finally willing to investigate and address the very serious issues with the current administration. But what about the extremely serious issues with the board? I have followed the “protocol” of Matthew 18. I have talked to administrators and numerous trustees. I have confronted them with evidence of wrongdoing and urged them to own their sins and step down. But they have not. And now is the time for reckoning.

Statements from Moody have repeatedly said that Roys has mischaracterized the situation with information “primarily based on anonymous and second-hand sources and include past events that have been resolved.”

Regarding the staff cuts, an MBI spokesperson told CT:

Such changes often result in wide-ranging emotions, especially for those whose jobs may have been impacted. As people seek to understand such changes, some reflect on past events and attribute new meaning to them. For others, the stress of change may impact their sense of trust in the organization.

This is true in Moody’s case as it engages in necessary changes to adapt its ministries for the future. No organization, including Moody, is exempt from challenge and conflict in the pursuit to build and maintain trust, unity, and a renewed sense of spirit for the advancement of the gospel.

In response to complaints over Nyquist’s housing arrangement with MBI, a spokesperson told CT:

Many academic institutions have a residence on campus for their president. [MBI] does not. Our board of trustees wanted [Nyquist] to live in close proximity to campus; however, our campus is located in some of the most expensive real estate in Chicago, so the board made it possible for [him] to live across from [MBI] with an interest-only loan at the market rate of 4 percent. [Nyquist] is therefore able to host students and student groups, helping him foster positive relationships with the student body, and generally be available for [MBI] business, which was the board’s desire. The terms of the loan are fully disclosed on [MBI’s] federal disclosure forms.

Prior to his resignation, Nyquist penned a letter with Fairfax on Monday acknowledging the allegations before the board.

“As we press forward, despite the challenges and hard conversations that are taking place at Moody, our executive team and the Board of Trustees are unified in our love for the Lord and this great institution, the pursuit of truth, and seeking reconciliation where possible,” they wrote. “With that, we have also come to recognize the need for, and are committed to, improving our culture and climate at Moody….”

The spokesperson said last week that alumni and onlookers can “be assured that as a Christ-centered organization, all personnel-related and other matters are dealt with in a timely, biblical, and professional manner.”

“Moody faces challenges, but we do so with hope and a renewed confidence in the Lord’s sovereignty as He guides and provides for Moody, which He has faithfully done for 132 years.”