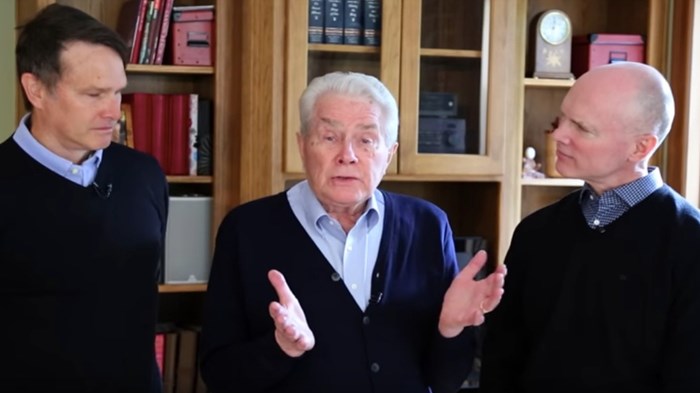 In a 12-minute YouTube video, international evangelist Luis Palau revealed yesterday that he has been diagnosed with stage 4 lung cancer.

After Palau, 83, and his wife Patricia “had a super busy fall … traveling around the world sharing the Good News like they always do,” explained his son Kevin Palau, the evangelist returned from a long trip to the United Kingdom in December “with kind of a chest cold … that wouldn’t go away.”

“We finally got Dad to go into the doctor,” said Kevin, president and CEO of the Luis Palau Association. “And to our surprise, the early report we got, just before Christmas, was that there was some cancer in one of Dad’s lungs.”

A few days ago, the family learned that the cancer is in stage 4—the most advanced stage, which for lung cancer has (in general) a five-year survival rate of less than 10 percent.

“That’s the reality we are dealing with now,” said Kevin. “[We’re] praying about what that means. … Mostly we are asking for people’s prayers.”

“It was a shock,” said Luis. “I haven’t been in a hospital one night, except when I broke a bone back in 1984 after Mission to London.”

“The first thing you do, in my case, is cry. I think, ‘oh wow, I could be gone in a few months,’” said the senior Palau. But he doesn’t feel “panic or horror.”

“Many people are praying that the Lord would do a miracle,” he said. “It would literally take a miracle. Medically speaking … stage 4 is big time.”

On the ministry’s website, Palau wrote in a health update:

As we seek the best medical advice and counsel, we’re also trusting the Lord and praying for complete healing. I would ask you to join us in that prayer. We’ll be sure to keep you updated.

In many ways, I feel the Lord has much more in store for me. Yet whatever tomorrow holds—I’m completely at peace. Both Patricia and I are. As we look back, we praise the Lord. Fifty-seven years of marriage. How many places we’ve been. How many people we’ve reached with the Gospel.

I hold strong to verses like Isaiah 41:10: “So do not fear, for I am with you; do not be dismayed, for I am your God. I will strengthen you and help you; I will uphold you with my righteous right hand.”

One reason Palau said he feels peace is because 10 years ago his ministry appointed son Kevin as its leader and annointed another son Andrew Palau as an evangelist. Along with a strong board of directors, his eponymous ministry is ready for its founder to pass it on.

He explained that he has preached about heaven often, because his own father died when he was young. “Now, it’s reality for me.”

Palau shared that earlier this week, “the Lord seemed to say to me, ‘Hey, I thought you read the Bible, and you knew that there comes a time when it is time to go.’” He then recited biblical examples of the apostles Paul (2 Tim. 4) and Peter (2 Pet. 1) acknowledging that their deaths were coming soon with peace.

Then Palau became teary, recalling verses from Revelation that “his servants shall see his face” (Rev. 22:3–4), and from Isaiah that “your eyes will behold the King in his beauty” (Isa. 33:17).

“I’ve preached about heaven a lot, and … you cry a lot,” he said, thinking about his sons, the ministry, his friends, and his wife.

His son Andrew then noted that his father can rest knowing that his sons and the ministry will persevere in their calling. “We don’t know how many days are left, and every one is like gold to us, Dad,” he said. “… You are proving day by day the power of faith.”

The diagnosis comes as a movie on Palau’s story began filming in Argentina.

CT interviewed Palau on his long friendship with Pope Francis, and profiled how the evangelist and a gay mayor were partnering to transform Portland. CT Pastors also interviewed the senior Palau.

CT interviewed Andrew Palau on how he overcame apathy to join his father in evangelism, and excerpted his book. CT Pastors interviewed all three Palaus on the “delicate dance” of helping churches to change their cities.